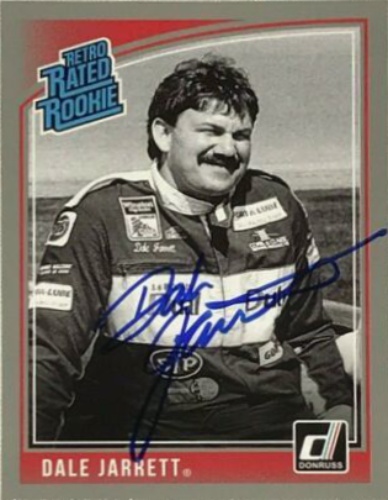 Dale Arnold Jarrett (born November 26, 1956) is a former American race car driver and current commentator for NBC. He is best known for winning the Daytona 500 three times (in 1993, 1996, and 2000) and winning the NASCAR Winston Cup Series championship in 1999. He is the son of 2-time Grand National Champion Ned Jarrett, younger brother of Glenn Jarrett, father of former driver Jason Jarrett, and cousin of Todd Jarrett. In 2007, Jarrett joined the ESPN/ABC broadcasting team as an announcer in select Nationwide Series races. In 2008, after retiring from driving following the 2008 Food City 500, he joined ESPN permanently as the lead racing analyst replacing Rusty Wallace. In 2015, Jarrett became a part of the NBC Sports Broadcasting Crew for NASCAR events. He was inducted in the 2014 class of the NASCAR Hall of Fame. More about Dale Jarrett

Current items with a signature of Dale Jarrett

These are the most current items with a signature of Dale Jarrett that were listed on eBay and on other online stores - click here for more items.

Traded items with a signature of Dale Jarrett

The most expensive item with a signature of Dale Jarrett (DALE JARRETT ON CARD INSCRIBED PRESS PASS LEGENDS AUTOGRAPH 1993 DAYTONA 500) was sold in November 2022 for $189.99 while the cheapest item (DALE JARRETT SIGNED NASCAR RACING CARD AUTOGRAPHED) found a new owner for $0.01 in March 2013. The month with the most items sold (30) was February 2011 with an average selling price of $4.99 for an autographed item of Dale Jarrett. Sold items reached their highest average selling price in August 2018 with $69.99 and the month that saw the lowest prices with $0.75 was July 2011. In average, an autographed item from Dale Jarrett is worth $4.00.

Most recently, these items with a signature of Dale Jarrett were sold on eBay - click here for more items.

Dale Jarrett's NASCAR Cup Ford finds home in Eastover (01/27/19): A plaque on the wall in Charles Bullard's home in Eastover proclaims that life is measured 'by the moments that take our breath away.'He had one such

Dale Jarrett reminisces about starting kissing tradition at the Brickyard (07/24/14): Dale Jarrett loved his win so much he had to celebrate it with a kiss. His impromptu smooch with the bricks in'96 has blossomed into a tradition for drivers of all series when they win at the famed Brickyard.

Nascar Hall of Famers Father and Son: Ned & Dale Jarrett (06/09/14): Do you know a great dad? Do you have a great dad? Dads are have been there for us throughout our lives – building memories and traditions that last a lifetime. This Father’s Day, Ned and Dale Jarrett are joining …

Dale Jarrett inducted into NASCAR HOF (01/30/14): CHARLOTTE, N.C. (AP) — Dale Jarrett had no idea what crazy things Blake Shelton might say as the country music star inducted him into the NASCAR Hall of Fame.

Dale Jarrett humbled by Hall of Fame induction; Maurice rounds out Petty clan (01/2014): CHARLOTTE - Dale Jarrett had no idea what crazy things Blake Shelton might say as the country music star inducted him into the NASCAR Hall of Fame.

NASCAR Q&A: Dale Jarrett on Daytona, Hawkeye football and golf (06/2013): Three-time Daytona 500 winner Dale Jarrett is a 32-time winner on the series now known as Sprint Cup, a newly inducted member of NASCAR's hall of fame and an analyst for ESPN.

Dale Jarrett 's new role at races: speaking up (03/2013): As a driver, Dale Jarrett was trained to say the right thing at the right time. Like everyone else in NASCAR, he knew to thank the sponsors, all the guys at the shop and his manufacturer after every race.

Dale Jarrett - Big Win, Mass Confusion (02/2011): The story of Dale Jarrett’s historic victory in the 35th Daytona 500 has been told many times throughout the last two decades.