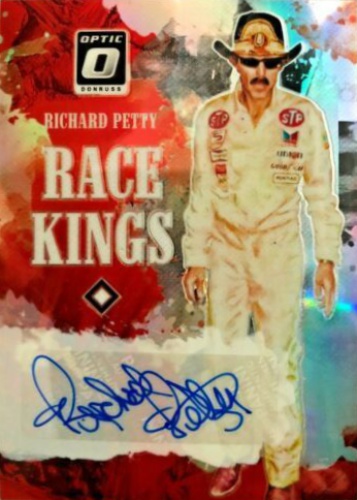 Richard Lee Petty (born July 2, 1937), nicknamed "The King", is an American former stock car racing driver who raced from 1958 to 1992 in the former NASCAR Grand National and Winston Cup Series (now called the NASCAR Cup Series), most notably driving the No. 43 Plymouth/Pontiac for Petty Enterprises. He was the first driver to win the Cup Series championship seven times (a record now tied with Dale Earnhardt and Jimmie Johnson), while also winning a record 200 races during his career. This included winning the Daytona 500 a record seven times and winning a record 27 races (10 of them consecutively) in one season (1967). Statistically, he is the most accomplished driver in the history of the sport, and is one of the most respected figures in motorsports as a whole. Petty remains very active in the sport as both a NASCAR team owner (Petty GMS Motorsports) in the Cup Series, and owner of Petty's Garage (car restoration and modification shop) in Level Cross, North Carolina. More about Richard Petty

Current items with a signature of Richard Petty

These are the most current items with a signature of Richard Petty that were listed on eBay and on other online stores - click here for more items.

Traded items with a signature of Richard Petty

The most expensive item with a signature of Richard Petty (Signed #9 Chase Elliott-Richard Petty-Rick Hendrick door from historic COTA win) was sold in May 2021 for $28700.00 while the cheapest item (Richard Petty signed Infineon Raceway hat + drivers sig) found a new owner for $0.01 in July 2011. The month with the most items sold (129) was January 2022 with an average selling price of $20.99 for an autographed item of Richard Petty. Sold items reached their highest average selling price in August 2010 with $152.50 and the month that saw the lowest prices with $1.99 was April 2017. In average, an autographed item from Richard Petty is worth $19.95.

Most recently, these items with a signature of Richard Petty were sold on eBay - click here for more items.

Q&A with new Chip Ganassi Racing driver Kurt Busch | NASCAR.com (12/07/18): Kurt Busch will climb into the No. 1 Monster Energy Chevrolet in 2019. He discusses with NASCAR.com the reasoning behind his move from Stewart-Haas Racing.

Q&A with new Chip Ganassi Racing driver Kurt Busch | NASCAR.com (12/2018): Kurt Busch will climb into the No. 1 Monster Energy Chevrolet in 2019. He discusses with NASCAR.com the reasoning behind his move from Stewart-Haas Racing.

Richard Petty Driving Experience With Net 10 Wireless (10/2014): Net 10 Wireless invited BallerStatus.com to Charlotte, North Carolina (October 23-25) for a NASCAR-filled weekend full of racing and good company. We kicked off day one with a visit to Charlotte Motor Speedway for a crash course in racing at the esteemed Richard Petty Driving School.

NASCAR King Richard Petty Helps At Food Bank (11/2013): Smithfield and Lowes Food donated more than 345-thousand pounds of food that will be distributed to 7 food banks around North Carolina.

Richard Petty presents Marine with new house (09/2013): BOLINGBROOK, Ill., Sept. 15 (UPI) -- A U.S. Marine said getting the keys to a new home in Illinois from NASCAR legend Richard Petty was still sinking in.

RICHARD PETTY: "LEADING THE TRACK" AGAINST COLON CANCER (05/2013): WASHINGTON -- The Undy 5000 5K Run/Walk Series is doing something a little different -- consider it a test drive of monumental proportions! In partnership with the Pocono Raceway and its owners, the Mattoli ...

Super 8 Hotels Offer Chance at Dream Road Trip, Richard Petty Meet and Greet (03/2013): In celebration of the launch of super8motorsports.com, the Super 8® hotel brand has kicked off its "Follow The Sign Instant Win Game and Sweepstakes," giving away over 1,000 total weekly and ...

NASCAR: Dale Earnhardt Jr. joins Richard Petty as Goody's spokesman (01/2013): One of the most venerable sponsors in NASCAR history will be represented by two of the sport's most iconic names.

Ford says it's close to re-signing Richard Petty team (09/2012): The two-car team has been driving Fusions for three seasons.

Richard Petty: Still King of NASCAR at 75 | Photos (06/2012): He will climb atop of one of the team haulers Saturday night as he always does, finding solitude in the roar of 43 engines churning along Daytona's super-speedway.

Richard Petty, Danica Patrick lead culture clash at Coca-Cola 600 (05/2012): CONCORD, N.C. — The King is at the front of the pack, hoping to end 13 years of solitude away from Victory Lane.

Richard Petty's second Spring Fling car show set for Memorial Day weekend (04/2012): Richard and#8220;The Kingand#8221; Petty and Petty's Garage will hold its second-annual Spring Fling Car Show on May 26 at the shop in Randleman, N.C. The show is open to all makes and models and is sponsored by the Automotive Lift Institute.

Relevance remains a King-sized problem for Richard Petty's NASCAR team (02/2012): The cowboy hat and dark sunglasses still are iconic trademarks, along with the toothy smile, homespun charm and a reputation for never turning his back on a race fan.

Richard Petty forms Nationwide team for former RWI driver Annett (01/2012): Richard Petty Motorsports has formed a Nationwide Series team for Michael Annett. His car will be sponsored by Pilot Flying J and will run for the Nationwide championship.

Report: Richard Petty Motorsports looking to sign Kurt Busch (12/2011): Kurt Busch, who split recently with Penske Racing following a tirade with ESPN's Jerry Punch, may not be without a Sprint Cup ride for long.

Richard Petty Experience branches out, adds exotic-car driving programs (11/2011): Stock-car legend Richard Petty is in the market for a few new cars: a couple of Ferraris, a pair of Lamborghinis, an Audi R8 and a

Wednesday morning briefing: Smoke, summer events and Richard Petty (06/2011): Good morning and welcome to the Freedom New Mexico Wenesday briefing.Money for ‘Smoke’ Smoke on the water, Clovis’ annual Fourth of July fireworks display, is in desperate need of donations if it is going to happen this year. The Clovis/Curry...

B&C Morning Show: NASCAR’s Richard Petty Stops By (04/2011): When it comes to driving a race car, no name is more prominent that Richard Petty. I mean, the guy’s nickname is “The King.” Enough said. Petty holds just about every NASCAR record that there [...]

Richard Petty: The Return of the King (02/2011): Richard Petty has rebounded from the worst year of his career.

Richard Petty Motorsports Media Tour notes (01/2011): Richard Petty Motorsports hosted the annual Charlotte Motor Speedway media tour on Wednesday to discuss the changes that have been made to the organization since the end of last season and what the expectations are for 2011. Below is a transcript of the formal stage remarks from team personnel.