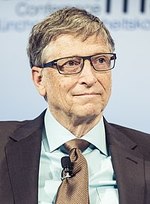 William Henry Gates III (born October 28, 1955) is an American business magnate, software developer, investor, author, and philanthropist. He is a co-founder of Microsoft, along with his late childhood friend Paul Allen. During his career at Microsoft, Gates held the positions of chairman, chief executive officer (CEO), president and chief software architect, while also being the largest individual shareholder until May 2014. He was a major entrepreneur of the microcomputer revolution of the 1970s and 1980s. More about Bill Gates

Current items with a signature of Bill Gates

These are the most current items with a signature of Bill Gates that were listed on eBay and on other online stores - click here for more items.

Traded items with a signature of Bill Gates

The most expensive item with a signature of Bill Gates (Windows 1.0 signed by Bill Gates) was sold in December 2017 for $13000.00 while the cheapest item (Microsoft's Bill Gates autographed) found a new owner for $0.94 in November 2015. The month with the most items sold (5) was February 2020 with an average selling price of $56.00 for an autographed item of Bill Gates. Sold items reached their highest average selling price in April 2021 with $2775.00 and the month that saw the lowest prices with $0.99 was August 2011. In average, an autographed item from Bill Gates is worth $56.00.

Most recently, these items with a signature of Bill Gates were sold on eBay - click here for more items.

Full interview: Bill Gates on climate change, Paul Allen, nationalism and, of co (02/20/19): Gates sat down with GeekWire to discuss Bill and Melinda Gates’ annual letter, published this week. The letter focused on developments that surprised the philanthropists over the past year, and what those surprises can teach us about the world’s biggest challenges.

Bill Gates and Elon Musk Agree This Is the Secret to Remembering More of What Yo (02/19/19): Reading is great, but it will help you get ahead only if you remember what you learn.

Bill Gates hires 400 “science ambassadors and journalists” to push GMO in Ghana (02/15/19): The Gates Foundation is funding a campaign to “end world hunger” by promoting GMO technology. The organization has hired 400 “science ambassadors” to influence agricultural policy in 35 countries. In the last four years, the Bill and Melinda Gates Foundation has donated a total of $15 million to two

What Bill Gates doesn't like about the Trump administration (02/14/19): The tech titan turned powerful philanthropist says Congress should get credit for standing up to the administration.

Full interview: Bill Gates on climate change, Paul Allen, nationalism and, of co (02/2019): Gates sat down with GeekWire to discuss Bill and Melinda Gates’ annual letter, published this week. The letter focused on developments that surprised the philanthropists over the past year, and what those surprises can teach us about the world’s biggest challenges.

This Bill Gates-backed start-up is fighting world hunger by making your avocados (12/2018): James Rogers is the founder of Apeel Sciences, a California startup that's looking to fight food waste, which costs the world $2.6 trillion each year.

Now Starring in China's Anti-Smoking Ads: Bill Gates (11/2014): The fight against smoking in China has a new champion. Wearing a T-shirt with the words “ Say No to Forced Smoking ,” Bill Gates appears in a new anti-smoking video starring Feng Zhe, an Olympian gymnast.

Bill Gates’ moment (10/2014): WASHINGTON — “Ebola has reminded people that it is not just poor people who can die of infectious disease,” Bill Gates tells me, in a characteristically matter-of-fact tone.

Bill Gates makes big donation to gun control advocates (08/2014): The Microsoft founder is backing a bill in Washington state that would require a criminal background check for all gun transfers, including online and private purchases - even gun shows. (1:00)

Banking For The Poor: Will This Be Bill Gates' Greatest Philanthropic Achievemen (07/2014): Microsoft cofounder Bill Gates has given away more than $28 billion, comfortably making him the world’s greatest living philanthropist.

Why Bill Gates must buy the Lakers (05/2014): Steve Ballmer's Clippers purchase offers new proof of tech mogul cultural domination. But the job is not yet done

Bill Gates reveals the deadliest animal around (04/2014): What animal kills more humans than any other? The answer might surprise you