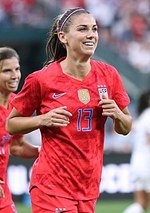 Alexandra Morgan Carrasco (born Alexandra Patricia Morgan; July 2, 1989) is an American soccer player for the Orlando Pride of the National Women's Soccer League (NWSL), the highest division of women's professional soccer in the United States, and the United States women's national soccer team. Since 2018, she has co-captained the national team with Carli Lloyd and Megan Rapinoe. More about Alex Morgan

The most expensive item with a signature of Alex Morgan (Nike Alex Morgan #13 - USA Away Jersey Autographed by whole USWNT Team!) was sold on eBay in July 2013 for $1380.00 while the cheapest item (alex morgan signed sharpie) found a new owner for $1.99 in December 2018. The month with the most items sold (32) was July 2019 with an average selling price of $42.50 for an autographed item of Alex Morgan. Sold items reached their highest average selling price in October 2018 with $250.00 and the month that saw the lowest prices with $19.95 was September 2018. In average, an autographed item from Alex Morgan is worth $84.49.

Current items with a signature of Alex Morgan

These are the most current items with a signature of Alex Morgan that were listed on eBay and on other online stores - click here for more items.

Traded items with a signature of Alex Morgan

Most recently, these items with a signature of Alex Morgan were sold on eBay - click here for more items.

Alex Morgan announces birth of her daughter in social media post (05/09/20): The child was born on May 7

WATCH: Alex Morgan dominates soccer drills while seven months pregnant (02/07/20): Your latest reminder that professional athletes are better than you

Morgan plans to play in 2020 Olympics despite pregnancy timing (11/06/19): United States star Alex Morgan said she plans to play in the 2020 Summer Olympics in Tokyo despite the timing of giving birth to her first child. Morgan is expecting a baby girl in April, approximately three months before the start of the Olympics. "I hope to get back on the field as soon as possi

Source says Alex Morgan will try to play in 2020 Olympics, a chance safeguarded (10/2019): If she wishes, Morgan will have every opportunity to regain her spot for Tokyo. As recently as a decade ago, that right wasn't well-protected.

Portland Thorns' Alex Morgan, Rachel Van Hollebeke, Tobin Heath called up to U.S (03/2015): Congratulations! Your weather is set to . You can change the location at any time. Don't have an account?

Alex Morgan featured in new FIFA Women's World Cup promo (02/2015): Congratulations! Your weather is set to . You can change the location at any time. Don't have an account?

Bikini-modeling Alex Morgan is soccer’s anti-Hope Solo (01/2015): Here comes Alex Morgan to the rescue of US women’s soccer. The photogenic 25-year-old may be the perfect goal-scoring and PR antidote for a program consumed by the negative publicity...

Alex Morgan being conservative with latest ankle injury while preparing for Wome (11/2014): Congratulations! Your weather is set to . You can change the location at any time. Don't have an account?

Alex Morgan out 4-6 weeks after ankle injury (10/2014): Congratulations! Your weather is set to . You can change the location at any time. Don't have an account?

McDonald's Monopoly is back, now with a chance to meet Portland Thorns' Alex Mor (09/2014): The Monopoly game at McDonald's makes its return to Oregon and Southwest Washington residents Sept. 30.

Alex Morgan remains out for U.S. women, will miss pair of China friendlies in Ap (03/2014): Another set of U.S. women’s national team matches on the horizon, another glaring omission on Tom Sermanni’s roster.

Alex Morgan, BFF in bikini war? (02/2014): There is no denying teammates Sidney Leroux and Alex Morgan are about as close as teammates can be. But last week, the duo took on the bikini modeling world seperately — but they proved just as adept as wowing us solo.

Alex Morgan And Sydney Leroux Did Miley Cyrus And Robin Thicke Halloween Costume (10/2013): With just about every celebrity you can imagine going as Miley Cyrus and Robin Thicke for Halloween 2013, adding another to the pile probably seems like overkill. That is, until you realize the celebrities in question are Alex Morgan and …

Alex Morgan Appears to be a Big Fan of ‘Storage Wars’ (09/2013): Alex Morgan remains a very modest Instagram user. Sorry guys, but she doesn’t post hourly “selfies,” nor does she post (...)

Flash won't alter game plan for Alex Morgan (08/2013): Whether or not Portland forward Alex Morgan is in the starting lineup for Saturday's 8 p.m. National Women's Soccer League championship, the Western New York Flash won't change what they do.

Thorns' Alex Morgan embraces stardom and role as face of women's soccer (07/2013): The striker is rapidly taking herself and women's soccer into new areas of popularity.

How Alex Morgan Went From An Unknown College Soccer Player To A Superstar (03/2013): Over the past few years Alex Morgan has risen from an unknown college athlete to one of the most famous female soccer players in the world. Morgan has played for the U.S. Women's National Team in the 2011 World Cup and the 2012 Olympics.

Ryan Lochte, Alex Morgan and other athletes recreate iconic album covers — PHOTO (02/2013): Even professional athletes secretly want to be rock stars. ESPN The Magazine has put out a music issue — on

The Mag: Q&A with Alex Morgan (11/2012): The soccer gold medalist talks about her Olympics experience

Conan reviews 'Just Dance 4' with a little help from Alex Morgan (09/2012): US chat show host Conan O'Brien was joined by US women's soccer team striker Alex Morgan for a review of Just Dance 4 as part of a regular Clueless Gamer segment -- and it's a good job that Just Dance fan Morgan was on hand to help out with some useful tips.