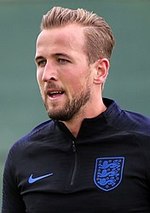 Harry Edward Kane MBE (born 28 July 1993) is an English professional footballer who plays as a striker for Premier League club Tottenham Hotspur and captains the England national team. Regarded as one of the best strikers in the world, Kane is known for his prolific goalscoring record and ability to link play. More about Harry Kane

Current items with a signature of Harry Kane

These are the most current items with a signature of Harry Kane that were listed on eBay and on other online stores - click here for more items.

Traded items with a signature of Harry Kane

The most expensive item with a signature of Harry Kane (Harry Kane - Worn - Signed Special Edition Poppy Spurs Home Shirt) was sold in November 2018 for $6313.60 while the cheapest item (Harry Kane SIGNED Tottenham Hotspur Adrenalyn XL 2019-2020 Card) found a new owner for $0.01 in April 2020. The month with the most items sold (22) was March 2019 with an average selling price of $6.14 for an autographed item of Harry Kane. Sold items reached their highest average selling price in November 2018 with $2524.21 and the month that saw the lowest prices with $2.12 was April 2021. In average, an autographed item from Harry Kane is worth $51.14.

Most recently, these items with a signature of Harry Kane were sold on eBay - click here for more items.

USA World Cup schedule: USMNT's soccer tournament continues with draw against Ha (11/25/22): Follow along the United States men's national team as they make their return to the FIFA World Cup in Qatar

Why it's Neymar's World Cup to lose as Brazil begin Qatar 2022 campaign; USA wil (11/24/22): Welcome to a Thanksgiving Day edition of the Golazo XI newsletter

Premier League takeaways: Harry Kane double lifts Spurs to win at Nottingham For (08/2022): Richarlison came off the bench for Tottenham and looked sharp

Tottenham coach Nuno Espirito Santo paid the price for Harry Kane's bizarre disa (11/2021): Kane was once more a peripheral figure at best as Tottenham fell to a 3-0 loss against Manchester United

Tottenham coach Nuno Espirito Santo is paying the price for Harry Kane's bizarre (10/2021): Kane was once more a peripheral figure at best as Tottenham fell to a 3-0 loss against Manchester United

Premier League bold predictions: Tottenham's Harry Kane gets mojo back against A (09/2021): Taking a deep dive into the most intriguing Premier League games of the weekend

Harry Kane gets hero's reception, scores twice as Tottenham reach Europa Confere (08/2021): Kane played in front of the home Tottenham crowd for the first time this season on Thursday

Here We Go: Chelsea, Man City monitor Harry Kane transfer news; Aguero, Depay to (05/2021): The club season is just about over and some difficult decisions loom for some of the top names on the market

Tottenham's Harry Kane still wants to be an NFL kicker one day (02/2021): Kane is not giving up on his future athletic goal

NBA-style trades in soccer? Here are four we'd like to see, with Neymar and Harr (04/2020): If the soccer world moves toward blockbuster trades, here are some that could happen

Harry Kane hints at Tottenham departure, says he won't stay with Spurs just 'for (03/2020): The English star striker is still recovering from injury

Harry Kane injury update: Tottenham star sidelined until March with 'serious' ha (01/2020): It's another blow to what's been a disastrous season for Tottenham

Kane nets hat trick as England seals Euro 2020 spot (11/2019): Harry Kane scored a first-half hat trick as England secured qualification for the 2020 European Championship with a 7-0 victory over Montenegro in the team’s 1,000th game on Thursday. The landmark night was completed by Tammy Abraham’s first England goal. England will be back at Wembley at the fin

Extended highlights: Liverpool 2, Tottenham 1 (10/2019): Harry Kane gave Spurs a stunning lead in the opening minute at Anfield, but Liverpool roared back to earn a 2-1 victory behind goals from Jordan Henderson and Mohamed Salah.