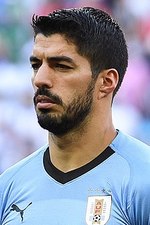 Luis Alberto Suárez Díaz (American Spanish: ; born 24 January 1987) is a Uruguayan professional footballer who plays as a striker for Spanish club Atlético Madrid and the Uruguay national team. Regarded as one of the best players of his generation and one of the greatest strikers in football history, Suárez has won nineteen major trophies in his career, including seven league titles and a UEFA Champions League at club level, as well as the 2011 Copa América with Uruguay. A prolific goalscorer, Suárez has won two European Golden Shoes, an Eredivisie Golden Boot, a Premier League Golden Boot, and the Pichichi Trophy. He has scored over 500 career goals for club and country. More about Luis Suarez

Current items with a signature of Luis Suarez

These are the most current items with a signature of Luis Suarez that were listed on eBay and on other online stores - click here for more items.

Traded items with a signature of Luis Suarez

The most expensive item with a signature of Luis Suarez (2019-20 Panini Prizm Flashback Black Autograph Luis Suarez 1/1 Liverpool Card) was sold in May 2021 for $5000.00 while the cheapest item (RARE Toy Figure Doll hand signed autographed LUIS SUAREZ COA Uruguay Barcelona) found a new owner for $0.99 in January 2018. The month with the most items sold (15) was February 2021 with an average selling price of $109.99 for an autographed item of Luis Suarez. Sold items reached their highest average selling price in February 2015 with $2000.00 and the month that saw the lowest prices with $1.53 was November 2018. In average, an autographed item from Luis Suarez is worth $63.00.

Most recently, these items with a signature of Luis Suarez were sold on eBay - click here for more items.

Uruguay vs. Chile score: Luis Suarez rescues points for Tabarez's crew to cancel (06/21/21): Each team took home a point in the group stage on Monday

Atletico Madrid star Luis Suarez wants to 'show why we're top of the league' as (03/07/21): The Uruguayan striker has thrived after his move from Barcelona to Atletico Madrid

Luis Suarez wants to 'show why we're top of the league' as Atletico Madrid face (03/03/21): The Uruguayan striker has thrived after his move from Barcelona to Atletico Madrid

Atletico Madrid vs. Barcelona: La Liga live stream, TV channel, how to watch onl (11/2020): Luis Suarez won't get to face his former side for the first time since leaving

Barcelona star Luis Suarez scores audacious, outrageous back-heel goal vs. Mallo (12/2019): It's unclear how the Uruguayan star managed to pull this off

Barca exploits set-pieces in comeback at Leganés, Bale booed (11/2019): With its world-class attack falling short against the worst team in the Spanish league, Barcelona turned to an underused weapon to remain atop the standings. Barcelona ground out a 2-1 victory at last-placed Leganes on Saturday thanks to a pair of second-half goals by Luis Suarez and Arturo Vidal -

Suarez, Cavani set to play for Uruguay in friendly v Hungary (10/2019): Strikers Luis Suarez and Edinson Cavani are set to return for Uruguay in a friendly game against Hungary in November.

Gerrard talked me out of Arsenal move, says Suarez (03/2019): Luis Suarez has revealed that Steven Gerrard's 'words' convinced him to reject a move to Arsenal and remain at Liverpool.

Analysing which striker is Barcelona's best option to replace Luis Suarez (02/2019): Suarez is now 32 and the club are actively looking for his long-term replacement

Barcelona vs. Real Madrid: El Clasico potential starters ranked, with Luis Suare (10/2018): A familiar face out of Barcelona checks in at No. 1 on our list