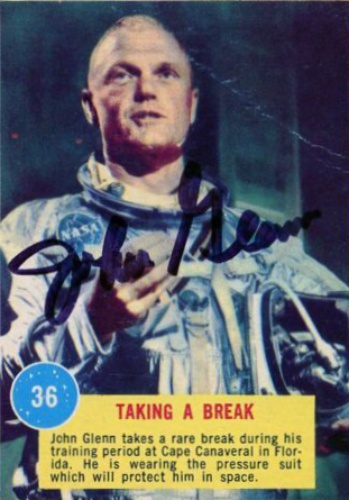 John Herschel Glenn Jr. (July 18, 1921 – December 8, 2016) was an American Marine Corps aviator, engineer, astronaut, businessman, and politician. He was the third American in space, and the first American to orbit the Earth, circling it three times in 1962. Following his retirement from NASA, he served from 1974 to 1999 as a Democratic United States Senator from Ohio; in 1998, he flew into space again at age 77. More about John Glenn

Current items with a signature of John Glenn

These are the most current items with a signature of John Glenn that were listed on eBay and on other online stores - click here for more items.

Traded items with a signature of John Glenn

The most expensive item with a signature of John Glenn (John Glenn Al Shepard NASA Gemini 7 signed framed First Day Covers PAAS LOA) was sold in January 2022 for $9999.99 while the cheapest item (SENATOR JOHN GLENN SIGNED TYPED LETTER DATED FEBRUARY 22nd 1982) found a new owner for $1.31 in December 2018. The month with the most items sold (37) was December 2016 with an average selling price of $71.00 for an autographed item of John Glenn. Sold items reached their highest average selling price in September 2018 with $759.90 and the month that saw the lowest prices with $13.99 was March 2012. In average, an autographed item from John Glenn is worth $59.00.

Most recently, these items with a signature of John Glenn were sold on eBay - click here for more items.

John Glenn’s historic trip around the Earth happened on this day in 1962 (02/20/19): On Feb. 20, 1962, astronaut John Glenn became the first American to orbit the Earth.Glenn rocketed into space aboard Mercury's Friendship 7 spacecraft.The craft circled Earth three times in 4 hours, 56 minutes before splashing down in the Atlantic Ocean, 800 miles southeast of Bermuda.According to N

Astronaut John Glenn Was the First Person to Eat in Space (12/08/16): What he ate might surprise you

Miscommunication makes Garber a no-show, puts John Glenn's Bay County Championsh (04/11/15): Glenn posted a tourney-best 2-0-1 record but was left in championship limbo because Essexville Garber was a no-show for the five-team event.

MLive Bay City Game of the Week canceled as John Glenn heads to Tawas for makeup (02/2015): The Glenn vs. Tawas game was postponed twice due to weather conditions, with the latest delay coming Monday. That left Friday as the only date for the two schools to meet.

John Glenn matmen sweep in triangular (01/2015): COSHOCTON --John Glenn High completed a sweep of Zanesville and Coshocton in a triangular wrestling match on Thursday. The Muskies defeated Zanesville by a 40-25 score and topped host Coshocton, 36-28.

John Glenn tops Meadowbrook to stay unbeaten (12/2014): BYESVILLE -- A two-and-a-half minute spurt in the latter stages of the first quarter and a solid finish which broke open a competitive game late resulted in a 20-point victory for unbeaten John Glenn High,...

John Glenn outlasts Cambridge in season opener, 48-38 (11/2014): NEW CONCORD -- Host John Glenn out scored the visiting Cambridge Lady Bobcats 11-1 in overtime Friday to open the season with a 48-38 victory in the "Fish Tank."

John Glenn rolls past Barnesville, 34-8 (08/2014): NEW CONCORD -- Host John Glenn capitalized on opportunities, while the visiting Barnesville Shamrocks failed to take advantage and the end result was a 34-8 season opening win by the Muskies in McConagha Stadium on...

Frankenmuth 13, John Glenn 3: Eagles explode as record-setter Kayla Brooks leads (05/2014): ESSEXVILLE, MI – The Frankenmuth Eagles were getting a sinking feeling.But before it reached the pit of their stomach, it struck a chord in their heart.And that was bad news for Essexville Garber and Bangor John Glenn.Garber’s four-run rally knotted...

John Glenn willing to learn from losses to strengthen position in girls soccer A (04/2014): The Bangor John Glenn girls soccer team may take a couple on the chin.But the Bobcats are still willing to face tough challenges head-on.The MLive-Bay City Team of the Week entered a pair of highly competitive weekend tournaments this season,...

Westland John Glenn thespians stage 'Totally Awesome '80s' (03/2014): John Hughes had a lock on teen films in the 1980s, producing such hits as The Breakfast Club, Ferris Bueller's Day Off and Pretty in Pink.

Lancer girls edge John Glenn for 2nd straight district title| (02/2014): ESSEXVILLE — Bullock Creek girls’ basketball coach Justin Freeland undoubtedly spent hours this week drawing up plays, discussing strategy, and teaching concepts with his team. But according to Freeland, the key to his Lancers’ win Friday was something that can’t be taught — desire.

Astronaut John Glenn To Attend Christening Of Namesake Ship In San Diego (01/2014): The Navy will christen the USNS John Glenn on Saturday morning in San Diego. Sen. John Glenn, the first American to orbit the Earth, will be in attendance.

Dover 65, John Glenn girls basketball 50 (12/2013): Moriah Monaco scored 30 points — including 14 in the fourth quarter — and Olivia Belknap added 15 points as the host Tornadoes knocked off the Muskies in nonleague play.

Cambridge-Meadowbrook, Shenandoah-Caldwell, Ridgewood-Newcomerstown among rivalr (10/2013): Don't look now, but the curtain is about to drop on the 2013 regular season for high school football. That means the playoffs are ahead for some....basketball and wrestling looms for others...and of course, several...

John Glenn grad Cole Martin earns all-Big Ten honors for University of Michigan (05/2013): Cole Martin ANN ARBOR – Cole Martin is one of the best backstops in the Big Ten. And he has the hardware to prove it. The former Bangor John Glenn standout delivered a rock-solid season behind the plate for...

Caldwell clips Meadowbrook; John Glenn splits (04/2013): BYESVILLE -- Host Meadowbrook High got off to a strong start, but the visiting Caldwell Redskins were able to overcome seven errors to claim a 11-6 win in a single game on Saturday.

John Glenn KO'd from tourney by West Holmes (02/2013): ZANESVILLE --A solid second half by the John Glenn High Muskies could not overcome a sluggish start to Tuesday's Division II Sectional Tourament contest at Zanesville High School.

Buckeye Trail collects road win; John Glenn Muskies suffer ECOL setback (01/2013): MORRISTOWN -- It was a shootout at the Hanger Wednesday with the visiting Buckeye Trail Warriors finally prevailing by a 84-81 score in a make-up contest with the host Union Local Jets.

Report: Westland John Glenn WR DaMario Jones commits to Michigan (10/2012): Jones is 6-foot-1,'1 pounds and rated three stars by Scout.com. He is the third receiver to commit to the class. Jones, who had been committed to Central Michigan, is now the Wolverines' 23rd commitment, according to ESPN.com.

John Glenn scores prized shutout at Sheridan, 28-0 (09/2012): THORNVILLE --A week after being on the receiving end of a home field shutout at the hands of Philo, John Glenn High administered a 28-0 shutout to host Sheridan in Muskingum Valley League action on...

John Glenn, Apollo 11 Astronauts Awarded Congressional Gold Medals (11/2011): The first American astronaut to orbit the Earth and the crew of the first moon landing were bestowed by Congress with its highest civilian honor, the Congressional Gold Medal, during a ceremony held in the Capitol Rotunda in Washington, D.C. on Wednesday (Nov. 16).

John Glenn Celebrates his 90th Birthday (07/2011): Glenn will forever be one of the great American heroes

Former astronaut and Ohio Sen. John Glenn tells Cleveland audience that educatio (06/2011): In a 30-minute speech at the Great Lakes Science Center, Glenn delves into the need for greater education that stresses science, technology, engineering and mathematics to make America competitive around the world.

Ohio's John Glenn Sidelined By Union Protests (02/2011): A Statehouse appearance Tuesday by former U.S. senator and Ohio space hero John Glenn has been canceled because of a planned pro-union demonstration.