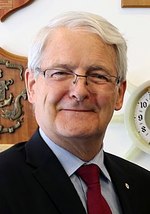 Joseph Jean-Pierre Marc Garneau PC CC CD MP (born February 23, 1949) is a Canadian politician and former astronaut who served as a Cabinet minister from 2015 to 2021. A member of the Liberal Party, Garneau was the minister of foreign affairs from January to October 2021 and minister of transport from November 2015 to January 2021. He is the Member of Parliament (MP) for Notre-Dame-de-Grâce—Westmount. More about Marc Garneau

Current items with a signature of Marc Garneau

These are the most current items with a signature of Marc Garneau that were listed on eBay and on other online stores - click here for more items.

Traded items with a signature of Marc Garneau

The most expensive item with a signature of Marc Garneau (8x10 Sized Autographed Picture of First Canadian Astronaut Marc Garneau) was sold in December 2018 for $60.00 while the cheapest item (1985 Original Canadian Astronaut Politician Marc Garneau Signed Cut Square) found a new owner for $0.74 in June 2019. The month with the most items sold (7) was February 2010 with an average selling price of $11.61 for an autographed item of Marc Garneau. Sold items reached their highest average selling price in December 2018 with $60.00 and the month that saw the lowest prices with $0.74 was June 2019. In average, an autographed item from Marc Garneau is worth $13.99.

Most recently, these items with a signature of Marc Garneau were sold on eBay - click here for more items.

Kitchen parties key to Marc Garneau's election strategy (01/09/15): In anticipation of the next federal election to be held in 2015, Marc Garneau, Member of Parliament for Westmount – Ville-Marie, expects to meet voters and answer their questions, all in the informal, personalized and cozy atmosphere of your kitchen.

Fisher: During time of global tumult, it is Justin Trudeau’s ideas, not Marc Gar (01/05/15): It seems I struck a raw nerve in examining the Liberals’ foreign and defence policies last week. Marc Garneau, the Liberal Foreign Affairs Critic, rebutted my column at length in Saturday’s National Post. I greatly admire Garneau. He has a […]

Ottawa shooting: MP Marc Garneau is safe (10/22/14): As shots were fired yesterday morning on Parliament Hill in the nation's capital, Marc Garneau, Westmount Federal MP was in the building.

John Baird, Marc Garneau attend Israel support rally in Ottawa (07/17/14): In what is being billed by organizers as a "sign of unity," Foreign Affairs Minister John Baird and Liberal foreign affairs critic Marc Garneau shared the stage Wednesday night at an Ottawa rally in support of the people of Israel.

Marc Garneau joins Cathy Bennett on campaign trail (03/2014): The Liberal candidate for the Virginia Waters byelection got some help on her campaign trail this weekend from an astronaut-turned-federal MP.

Marc Garneau could have the right stuff for Liberal leader (06/2012): For many voters, Canada’s first astronaut has already passed some pretty important qualifying exams