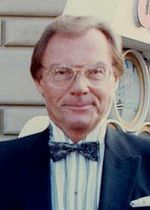 William West Anderson (September 19, 1928 – June 9, 2017), known professionally as Adam West, was an American actor, known primarily for his role as Batman in the 1960s ABC series of the same name and its 1966 theatrical feature film. West began acting in films in the 1950s. He played opposite Chuck Connors in Geronimo (1962) and The Three Stooges in The Outlaws Is Coming (1965). He also appeared in the science fiction film Robinson Crusoe on Mars (1964) and performed voice work on The Fairly OddParents (2003–2017), The Simpsons (1992, 2002), and Family Guy (2000–2019), playing fictional versions of himself in all three. Late in his career, West starred in two direct-to-video animated Batman films, Batman: Return of the Caped Crusaders, and Batman vs. Two-Face, the latter of which was released posthumously. More about Adam West

The most expensive item with a signature of Adam West (BATMAN CAST SIGNED AUTOGRAPHED PHOTO ADAM WEST WARD MEREDITH ROMERO BECKETT BAS) was sold on eBay in November 2017 for $2195.00 while the cheapest item (To Donald Trump signed by Adam West on OML baseball) found a new owner for $0.01 in April 2017. The month with the most items sold (27) was June 2017 with an average selling price of $41.96 for an autographed item of Adam West. Sold items reached their highest average selling price in August 2018 with $1100.00 and the month that saw the lowest prices with $23.98 was April 2019. In average, an autographed item from Adam West is worth $49.99.

Current items with a signature of Adam West

These are the most current items with a signature of Adam West that were listed on eBay and on other online stores - click here for more items.

Traded items with a signature of Adam West

Most recently, these items with a signature of Adam West were sold on eBay - click here for more items.

England beat West Indies by 232 runs to win third Test – as it happened (02/12/19): Roston Chase scored a century but West Indies could not hold England at bay in the final Test in St Lucia

Is Stoke v West Brom on TV? Channel details, kick-off time, team news and odds (02/09/19): All you need to know about this afternoon's televised EFL clash between Stoke City and West Brom at the bet365 Stadium

Kanye West and Kim Kardashian allegedly banned from The Voice set (01/29/19): Singer John Legend is set to join The Voice US for season 16 as a coach, but it seems he’s off to a rocky start!

ONLY FOOLS AND HORSES THE MUSICAL Comes to the West End (01/29/19): Stone me! Would you Adam and Eve it? Only Fools and Horses is going up West!

Adam West: 'If I didn't love Batman, I'd be a little bit strange' (11/2014): The inimitable Adam West talks about playing Batman once again for a special level based on the much-loved 1960s TV show in LEGO Batman 3: Beyond Gotham, and why he's the "luckiest actor in the world".

Adam West thinks Affleck will be a good Batman (07/2014): The original Batman star Adam West, who played the caped crusader from 1966 - 1968, has said he thinks Ben Affleck will be really good in the role.

Adam West to Make Special Appearance for Launch of Aristocrat's BatmanClassic TV (06/2014): Aristocrat's newest slot game, Batman™ Classic TV Series Slot Game Powered by Wonder Wheels™, will arrive with a POW! a ZAP! and a BAM! when it makes its world premiere at Pechanga Resort & Casino on Wednesday, ...

Original Batman Adam West Reflects on His 'Tongue-in-Cheek' Superhero's Legacy (05/2014): Batusi, anyone? In his own words, the actor who first immortalized the superhero onscreen recalls the pleasure and pop sensibility behind his character. read more

Photo Advisory: Adam West Appears at G2E in Las Vegas to Promote BatmanClassic T (09/2013): LAS VEGAS, NV-- - Caption: Aristocrat is transforming the game at the Global Gaming Expo 2013 in Las Vegas. Appearing with one of the company's newest games is Adam West, who portrayed Batman in the 1960's ...

Adam West draws out hundreds of Batman fans at MSU (08/2013): Loading Photo Galleries ... EAST LANSING — The campy TV version of Batman still has superhero cachet more than 40 years after it left the airwaves.

Mansome 155: Adam West's How To Tell If She's Cheating on You (04/2013): Are you suspicious of your significant other, but don’t know if you’re being paranoid? Using these three simple clues, see if your relationship is even more on the rocks than you feared. Very special guest Adam West teaches you how to tell if she’s cheating on you.

A Real Champagne Moment: Adam West's Batmobile Auctions At $4.6 Million (01/2013): Even Bruce Wayne would’ve had a battle getting his hands on this at auction; the original Batmobile, produced for the 1960’s ABC Batman TV Series...

Original Batmobile driven by Adam West set to for auction in New Year (11/2012): THE iconic vehicle was used during the 1960s TV show in which West played the superhero but no price has been revealed.