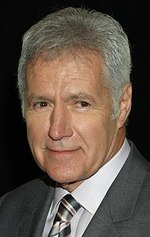 George Alexander Trebek OC (/trəˈbɛk/; July 22, 1940 – November 8, 2020) was a Canadian-American game show host and television personality. He hosted the syndicated general knowledge quiz game show Jeopardy! for 37 seasons from its revival in 1984 until his death in 2020. Trebek also hosted a number of other game shows, including The Wizard of Odds, Double Dare, High Rollers, Battlestars, Classic Concentration, and To Tell the Truth. He also made appearances, usually as himself, in numerous films and television series. More about Alex Trebek

Current items with a signature of Alex Trebek

These are the most current items with a signature of Alex Trebek that were listed on eBay and on other online stores - click here for more items.

Traded items with a signature of Alex Trebek

The most expensive item with a signature of Alex Trebek (Alex Trebek (PSA) GEM-MINT 10! Autographed Dollar Bill U.S Currency Jeopardy) was sold in October 2022 for $1999.00 while the cheapest item (ALEX TREBEK SIGNED INDEX CARD HOST OF JEOPARDY DAY TIME HOST ACTOR) found a new owner for $0.59 in January 2016. The month with the most items sold (348) was November 2020 with an average selling price of $102.50 for an autographed item of Alex Trebek. Sold items reached their highest average selling price in July 2021 with $259.50 and the month that saw the lowest prices with $0.69 was June 2015. In average, an autographed item from Alex Trebek is worth $73.73.

Most recently, these items with a signature of Alex Trebek were sold on eBay - click here for more items.

Jeopardy Champion Mattea Roach Makes History, And Alex Trebek Would Be Proud (04/22/22): Jeopardy! is celebrating another record-breaking contestant, and this one would make Alex Trebek particularly proud.

Record-Breaking Jeopardy Champ Amy Schneider Recalls How She Was Originally Supp (02/06/22): Amy Schneider's run on Jeopardy! just ended, but she recently recalled that she was first scheduled to be on in 2020 with Alex Trebek.

Champion Ken Jennings will be first interim 'Jeopardy!' host (11/24/20): A long-term host to replace Alex Trebek, who died of cancer on Nov. 8, will be named later.

Watch: Alex Trebek’s influence on pop culture, beyond ‘Jeopardy!’ (11/10/20): Trebek's classic visit to Boston for "Cheers" was just one of many memorable appearances for the "Jeopardy!" host, who died Sunday.

'Jeopardy!' pays heartfelt tribute to Alex Trebek on Monday's episode (11/10/20): "He will forever be an inspiration for his constant desire to learn, his kindness, and for his love of his family."

Video: Alex Trebek shares an update on his pancreatic cancer 1 year after diagno (03/2020): "I'd be lying if I said the journey had been an easy one. There were some good days, but a lot of not-so-good days."

Alex Trebek says he needs 30 seconds for exit on final 'Jeopardy' (01/2020): Trebek announced last March that he'd been diagnosed with stage 4 pancreatic cancer but will continue his job while still able.

How Watching ‘Jeopardy!’ Together Helped Me Say Goodbye to My Father (12/2019): Every night, as my father was dying, we made the show a ritual. Then Alex Trebek announced that he was sick, too.

'We love you, Alex': Alex Trebek gets emotional over 'Jeopardy!' contestant's un (11/2019): The end of “Jeopardy!” got unexpectedly emotional on Monday night. Host Alex Trebek, who recently revealed that he has resumed chemotherapy for Stage 4 pancreatic cancer, turned to contestant Dhruv Gaur for the final “Jeopardy!” answer. The category was “Famous Phrases&