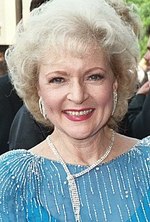 Betty Marion White Ludden (January 17, 1922 – December 31, 2021) was an American actress and comedian. A pioneer of early television, with a television career spanning more than seven decades, White was noted for her vast work in the entertainment industry and being one of the first women to work both in front of and behind the camera. She was the first woman to produce a sitcom (Life with Elizabeth) in the United States, which contributed to her being named honorary Mayor of Hollywood in 1955. White is often referred to as the "First Lady of Television", a title used for a 2018 documentary detailing her life and career. More about Betty White

Current items with a signature of Betty White

These are the most current items with a signature of Betty White that were listed on eBay and on other online stores - click here for more items.

Traded items with a signature of Betty White

The most expensive item with a signature of Betty White (Golden Girls Cast Signed 8x10 Photo JSA X4 Getty McClanahan Betty White Arthur 2) was sold in November 2022 for $3399.95 while the cheapest item (Hand Signed autographed Betty White rare Shambala Preserve Roar Member T-Shirt) found a new owner for $0.01 in March 2022. The month with the most items sold (444) was January 2022 with an average selling price of $99.00 for an autographed item of Betty White. Sold items reached their highest average selling price in March 2016 with $175.50 and the month that saw the lowest prices with $2.99 was June 2016. In average, an autographed item from Betty White is worth $64.99.

Most recently, these items with a signature of Betty White were sold on eBay - click here for more items.

Betty White And Bob Saget Have Both Been Skipped Over During In Memoriams This Y (07/04/22): We lost both Betty White and Bob Saget this year. But Awards ceremonies have skipped them over.

Betty White's Assistant Shares Cute Story About How The Star Felt After Learning (01/30/22): Apparently, Betty White had an adorable reaction to learning that her 100th Birthday Celebration would go to theaters.

Betty White’s Assistant Shares The Last Photo She Took With The Late Star In Swe (01/22/22): Betty White's assistant, Kiersten Mikelas, shared the last photo she took before her passing in a sweet post.

Betty White's Assistant Shared Touching Post, Photo On What Would Have Been Icon (01/18/22): Betty White's assistant was among many friends, family and fans who paid tribute to the icon on what would have been her 100th birthday.

After Letting Patrons Buy Beers For Betty White, Pub Finds Sweet Way To Use The (01/2022): Betty White may be gone, but she is immortalized in a small town's 'Blonde Betty' beer.

Betty White: Golden Girl of game shows (03/2015): Betty White and the Daytime Emmy Awards have a date April 26, when she will receive a Lifetime Achievement Award.

Craig Ferguson's final 'Late Late Show' guests include Jon Hamm, Jay Leno, Mila (11/2014): Craig Ferguson is bringing some friends back for his final week as host of CBS’ The Late Late Show . One of his final guests, though, will be former Tonight Show host Jay Leno. read more

Bend Like Betty: Hire Your Next Betty White (09/2014): Inside every older candidate could be a Betty White ready to shine. Content Classification:  Curated read more

'Hot in Cleveland' Creator on Show Secrets, Eve of "Betty White Fever" and Ultim (08/2014): As the TV Land success hits 100 episodes, Suzanne Martin and the stars reveal the special ingredients to its quick success read more

‘Hot in Cleveland’ cast on what they’ve all learned from Betty White (06/2014): “Hot in Cleveland” was just renewed for its sixth season on the TV Land Network. The show stars Betty White, Valerie Bertinelli, Jane Leeves and Wendie Malick.

Watch Mario Lopez Squirm During This Hilarious Betty White Prank! (05/2014): Actress and comedian Betty White recently stopped by Universal Studios Hollywood to promote the upcoming season of her prank show, "Off Their Rockers," and chatted with "Extra" host Mario Lopez.

Betty White on her romance regrets and the one she got right (04/2014): Actress and comedienne Betty White has opened up on the subject of romance in an interview with New You Magazine.

Betty White Talks About ‘Hot in Cleveland’ and ‘The Soul Man’ Live Team-Up (03/2014): Betty White, the former actress of the The Golden Girls, has been making promo appearances within the past few days to promote a highly anticipated TV sitcom collaboration. White has recently been featured in a few interviews sharing her excitement about …

Betty White: Valerie Harper is 'doing very well' thanks to 'her positive attitud (12/2013): Betty White had some good news to share about Valerie Harper when she appeared on CBS' "The Talk" on Monday (Dec. 2).

TV picks for Dec. 1-Dec. 5:  "Treme,” "Charlie Brown Christmas,” "Kirstie,” Bett (11/2013): Khandi Alexander in “Tremé,” whose final season begins Sunday. The five-episode coda for “Tremé” (8 p.m., HBO) begins as the characters continue to cope with the aftermath of Hurricane Katrina through tears, music and a whole lot of red beans and rice.

In-Flight Videos Starring Betty White, Ninjas, Santa Claus Are Making Airline Pa (10/2013): Flying these days can be a drag, right? But this month has seen a rush of airlines using comedy and hot dance numbers to spice up that dreariest part of the flight, the safety video.

Winner of the Win a Date With Betty White Contest Announced (08/2013): Ever wonder what it would be like to share an evening of witty banter with America's Golden Girl, Betty White? Well, one lucky couple will have their chance. Cody and Greg Flietner will be among the very ...

Hot In Cleveland First Look: Betty White Imagines Life as a Mother—Watch Now! (07/2013): We can never get enough Betty White! We're Americans, after all. So you know that we'll be tuning into this Wednesday's all-new Hot in Cleveland, and we've got your exclusive...

Betty White Flirts With Alex Pettyfer, Both Actors Auction Off Kisses (04/2013): Betty White is still such a hot property, even a peck on the cheek goes for top dollar. The 91-year-old "Hot in Cleveland" star appeared at Saturday's GLAAD Media Awards in Los Angeles, where she and "Magic Mike" hunk Alex … Continue reading →

Betty White Gets Wine-Tossing Lessons From NeNe Leakes On 'Off Their Rockers' (01/2013): After a few pointers from Leakes, as well as a demonstration, White was able to toss that wine with proficiency. What viewers didn't know is that the women weren't just tossing wine toward the camera. They were tossing it on castmember Michael Yama -- or at least that was the gag.

Betty White: Lucky to be working at 90 (08/2012): HOLLYWOOD, Aug. 26 (UPI) -- U.S. actress Betty White, 90, said she doesn't owe her longevity to healthy eating habits because hot dogs and Red Vines are among her favorite foods.

Betty White brings laughter, love for animals to D.C. (05/2012): TV stars come and go, but one woman with an infectious smile has always been there.

Barbara Walters Named Roastmaster at Betty White Friars Club Roast (03/2012): Jordan Zakarin The longtime TV journalist will preside over the May 16 dinner that will be held to both honor and mock the 90-year-old icon. read more

Betty White Turning 90, Still Playing Pranks (12/2011): NBC will honor the television icon with a 90-minute special honoring her birthday, followed by a preview of her new series in which she pranks youngsters.

More Betty White Fanfare -- NBC Is Doing A Special Broadcast Of Her 90th Birthda (11/2011): If you thought the obsession with Betty White was ending anytime soon, think again. She's just getting started.

Jason Sudeikis pines for Betty White (06/2011): Jason Sudeikis is worried he’s missed his chance with Betty White. The 35-year-old actor has discusses his romantic preferences in a new interview, and jokingly admitted he harbours a crush on Betty.

Real stories of a broken family, Betty White, Vegas hookers and more (04/2011): HBO's 'Cinema Verite' looks back at the life of the Loud family from the groundbreaking PBS show 'An American Family'