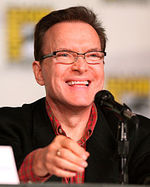 William Richard Werstine (born 1952), known professionally as Billy West, is an American voice actor, comedian, impressionist, musician, and former radio personality. His voice roles include Bugs Bunny in the 1996 film Space Jam and several subsequent projects, the title characters of Doug and The Ren & Stimpy Show, as well as the Futurama characters Philip J. Fry, Professor Farnsworth, Dr. Zoidberg, and Zapp Brannigan. In commercials, he is the current voice of the Red M&M and formerly voiced Buzz for Honey Nut Cheerios. West also voices other such established characters such as Elmer Fudd, Popeye, Shaggy Rogers, Skeets, Tom, Muttley, and Woody Woodpecker. He was a cast member on The Howard Stern Show, during which time he was noted for his impressions of Larry Fine, Marge Schott, George Takei, and Jackie Martling. More about Billy West

Current items with a signature of Billy West

These are the most current items with a signature of Billy West that were listed on eBay and on other online stores - click here for more items.

Traded items with a signature of Billy West

The most expensive item with a signature of Billy West (Futurama # 1 CGC SS 9.8 White Pages Newsstand 4x signed Billy West Phil Lamare) was sold in October 2021 for $700.00 while the cheapest item (Signed University of Pittsburgh Cup - Bill (Billy) West #20) found a new owner for $0.99 in December 2016. The month with the most items sold (9) was December 2022 with an average selling price of $149.99 for an autographed item of Billy West. Sold items reached their highest average selling price in October 2020 with $500.00 and the month that saw the lowest prices with $4.99 was September 2019. In average, an autographed item from Billy West is worth $61.50.

Most recently, these items with a signature of Billy West were sold on eBay - click here for more items.