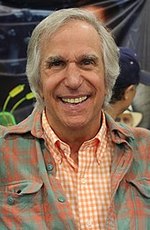 Henry Franklin Winkler (born October 30, 1945) is an American actor, comedian, author, executive producer, and director. Initially rising to fame as Arthur "Fonzie" Fonzarelli on the American television series Happy Days, Winkler has distinguished himself as a character actor for roles such as Arthur Himbry in Scream, Coach Klein in The Waterboy, Barry Zuckerkorn in Arrested Development, Eddie R. Lawson in Royal Pains, Fritz in Monsters at Work, Uncle Joe in The French Dispatch, and Gene Cousineau in Barry. He is the recipient of a number of accolades, including a Primetime Emmy, two Daytime Emmys, two Golden Globe Awards, and one Critics Choice Award. More about Henry Winkler

Current items with a signature of Henry Winkler

These are the most current items with a signature of Henry Winkler that were listed on eBay and on other online stores - click here for more items.

Traded items with a signature of Henry Winkler

The most expensive item with a signature of Henry Winkler (The Waterboy Signed Jersey Henry Winkler & Adam Sandler JSA/LOA) was sold in December 2020 for $695.00 while the cheapest item (HENRY WINKLER HAPPY DAYS THE FONZ,COOL Signed W/love Newspaper Photo) found a new owner for $0.99 in October 2022. The month with the most items sold (46) was April 2022 with an average selling price of $44.99 for an autographed item of Henry Winkler. Sold items reached their highest average selling price in September 2017 with $308.77 and the month that saw the lowest prices with $1.29 was October 2009. In average, an autographed item from Henry Winkler is worth $29.95.

Most recently, these items with a signature of Henry Winkler were sold on eBay - click here for more items.

Henry Winkler Breaks the Curse of Stardom (04/27/22): Now in his 70s, the pop culture icon has found his true calling on “Barry,” as the king of character actors.

Barry's Henry Winkler Sounds More Paranoid Than Anyone About Gene Being Killed O (11/09/21): Henry Winkler is very paranoid his Barry character will be killed off.

Henry Winkler Jumps On Wichita State Bandwagon, Gets All the Retweets (03/23/15): SPOILER: What a time to be alive.

Henry Winkler and Garry Marshall: how we made Happy Days (03/10/15): Henry Winkler: ‘Leather was associated with crime, so at first I had to wear a puce golf jacket. It did not look cool’ Related: Henry Winkler: 'The Fonz was everything I wanted to be' Robin Williams picked up a script and I realised I was in the presence of greatness Continue reading...

Banff to Honor Henry Winkler With Tribute (12/2014): The actor, director and producer who played the Fonz in the classic U.S. sitcom "Happy Days" will receive an award of excellence at the Canadian Rockies event. read more

Henry Winkler reflects on friend Robin Williams (08/2014): Actor, director, producer and writer Henry Winkler was in Indianapolis on Wednesday and reflected on his life and career.

40 Years of ‘Happy Days’ with Henry Winkler (02/2014): Dave Plier talks to television’s coolest icon, Henry Winkler on the 40th Anniversary of ‘Happy Days’ and great stories from behind-the-scenes, his roles on ‘Arrested Development’ and the new season ‘Royal Pains’, and the latest from his children’s book series …

Henry Winkler gets family sitcom (01/2014): Henry Winkler is to star in his very own family comedy The Winklers.

BBC reporter gets surprised by Henry Winkler on the street (12/2013): This reporter deserves a raise and a promotion for his accidental street interview with Henry "The Fonz" Winkler. BBC's James Landale was asking passersby on the street what they thought about a new addition to London's Heathrow Airport -- when … Continue reading →

Photos: Rehearsal Pics: Henry Winkler prepares his Hook for Richmond's Peter Pan (11/2013): As Happy Days the Musical prepares to launch its UK premiere production on tour in the new year, the original Fonz Henry Winkler is preparing for another go at pantomime magic, starring in Peter Pan at the Richmond Theatre, which opens on 10 December