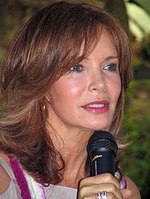 Jacquelyn Ellen "Jaclyn" Smith (born October 26, 1945) is an American actress and businesswoman. She is best known for her role as Kelly Garrett in the television series Charlie's Angels (1976–1981), and was the only original female lead to remain with the series for its complete run. She reprised the role with cameo appearances in the films Charlie's Angels: Full Throttle (2003) and Charlie's Angels (2019). Her other films include Nightkill (1980) and Déjà Vu (1985). Beginning in the 1980s, she began developing and marketing her own brands of clothing and perfume. More about Jaclyn Smith

Current items with a signature of Jaclyn Smith

These are the most current items with a signature of Jaclyn Smith that were listed on eBay and on other online stores - click here for more items.

Traded items with a signature of Jaclyn Smith

The most expensive item with a signature of Jaclyn Smith (Charlies Angels Cast Signed Autograph 8x10 Jaclyn Smith Ladd Fawcett) was sold in November 2020 for $199.95 while the cheapest item (AUTOGRAPHED Jaclyn Smith K-Mart Promo Flier Charlie's Angels) found a new owner for $0.99 in March 2020. The month with the most items sold (29) was April 2020 with an average selling price of $22.50 for an autographed item of Jaclyn Smith. Sold items reached their highest average selling price in December 2016 with $49.99 and the month that saw the lowest prices with $0.99 was March 2012. In average, an autographed item from Jaclyn Smith is worth $15.50.

Most recently, these items with a signature of Jaclyn Smith were sold on eBay - click here for more items.

Go Inside Jaclyn Smith's Los Angeles Home (04/16/14): Jaclyn Smith may be a Hollywood icon, but the “Charlie’s Angels” star revealed that her favorite place to be in the world is home. The 68-year-old opened her lovingly restored Georgian colonial to People magazine’s cameras recently, declaring it her “favorite place in the whole...

Jaclyn Smith Needed Grief Counselling After Mother's Death (04/13/14): Veteran actress Jaclyn Smith is still struggling to overcome the death of her mother five years ago, confessing she cries about the loss every...

Jaclyn Smith's Magnificent LA Home: Take a Tour (04/10/14): The TV icon (and furniture designer) shows off her meticulously decorated Georgian colonial. "I'm very neat and a perfectionist," says Smith. "Things have to be a certain way."

Jaclyn Smith Opens Up About the Ryan O'Neal Court Case (12/2013): The case between Ryan O'Neal and The University of Texas at Austin is now in the hands of the jury, which must decide if the school or O'Neal should have one of two Warhol portraits of Farrah Fawcett

We chat live with one of the most beautiful women in the world, Jaclyn Smith. (12/2012): Jaclyn tells us about her skin care line and Charlie’s Angels The Complete Series on DVD. Her skin care line is at JaclynSmithBeauty.com. …

Sears And Kmart Invite Shoppers To Deck The Halls This Holiday Season With Sandr (11/2012): HOFFMAN ESTATES, Ill., Nov. 7, 2012 /PRNewswire/ -- The holidays are right around the corner, and Sears and Kmart are the festive headquarters with everything needed to decorate the home and entertain ...