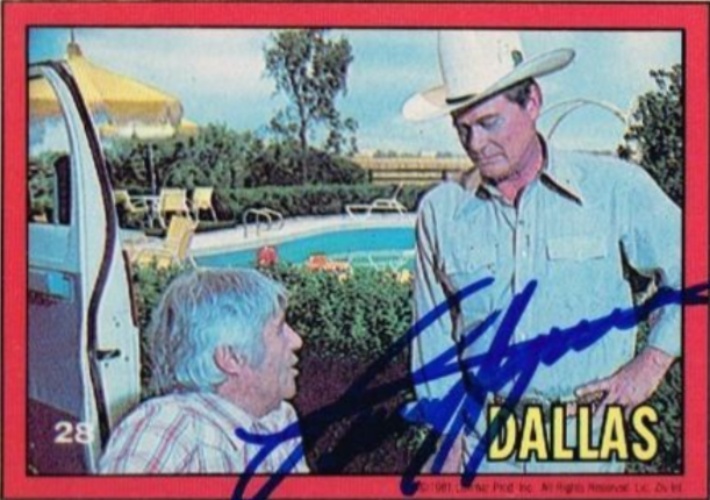 Larry Martin Hagman (September 21, 1931 – November 23, 2012) was an American film and television actor, director, and producer, best known for playing ruthless oil baron J. R. Ewing in the 1978–1991 primetime television soap opera, Dallas, and the befuddled astronaut Major Anthony Nelson in the 1965–1970 sitcom I Dream of Jeannie. Hagman had supporting roles in numerous films, including Fail-Safe, Harry and Tonto, S.O.B., Nixon, and Primary Colors. His television appearances also included guest roles on dozens of shows spanning from the late 1950s until his death, and a reprise of his signature role on the 2012 revival of Dallas. Hagman also worked as a television producer and director. He was the son of actress Mary Martin. Hagman underwent a life-saving liver transplant in 1995. He died on November 23, 2012, from complications of acute myeloid leukemia. More about Larry Hagman

Current items with a signature of Larry Hagman

These are the most current items with a signature of Larry Hagman that were listed on eBay and on other online stores - click here for more items.

Traded items with a signature of Larry Hagman

The most expensive item with a signature of Larry Hagman (8x10 Autographed Cast Photo original TV series Dallas Larry Hagman) was sold in November 2012 for $525.00 while the cheapest item (LARRY HAGMAN SIGNED 3X5 CARD DALLAS JR EWING VERY NICE!) found a new owner for $0.01 in October 2009. The month with the most items sold (46) was November 2012 with an average selling price of $31.50 for an autographed item of Larry Hagman. Sold items reached their highest average selling price in January 2015 with $200.00 and the month that saw the lowest prices with $0.01 was October 2009. In average, an autographed item from Larry Hagman is worth $24.99.

Most recently, these items with a signature of Larry Hagman were sold on eBay - click here for more items.

'Dallas' Star Larry Hagman -- R.I.P. ... But Only After You Pay Up (12/20/14): Legendary actor and "Dallas" star Larry Hagman broke his word by dying ... and now a guy who says he was left high and dry wants the ghost of Larry to ante up.John Castonia claims he was lured from Texas to Cali in 2012, to manage Hagman's…

Actor Larry Hagman gets bronze statue (09/22/14): WEATHERFORD, Texas— Actor Larry Hagman has been memorialized in bronze in his Texas hometown. The actor most famous for playing J.R. Ewing on the TV show “Dallas” was ...

Larry Hagman lives on in new Dallas (08/2014): Larry Hagman died midway through filming the latest season of Dallas but writers wrote his death into the story, creating a "memorial" for Hagman through the show.

Larry Hagman will never die as long as Dallas draws breath (02/2014): J.R. Ewing is gone, but his presence still looms large on Dallas — along with the influence of the actor who made the conniving oilman one of television’s most beloved characters.

Larry Hagman To Make Dallas Return From Beyond The Grave (01/2014): Late actor Larry Hagman will feature in the upcoming new season of Tv hit Dallas when producers use old footage of his iconic character J.R....

Dallas Stars In Dvd Tribute To Larry Hagman (11/2013): The cast and crew of hit drama series Dallas are to pay tribute to the show's late star Larry Hagman in a series of extra features on an upcoming...

Jesse Metcalfe Dishes On 'Dallas' Season 3; Wishes Larry Hagman Had Been Among T (09/2013): Jesse Metcalfe talks at the 2013 HBO Emmy Party about returning to work on "Dallas" for Season 3. Plus, what did he think of how the Emmys handled the In Memoriam section of the show? Why does he wish Larry Hagman had been among the five honored?

Larry Hagman's Dallas belt to go under the hammer (04/2013): Larry Hagman's bejewelled silver and gold belt buckle which he wore while playing J.R. Ewing in 'Dallas' is expected to

'Dallas': Lee Majors Heads to South Fork With Help From Larry Hagman (03/2013): The former Malibu neighbors had discussed reuniting on the series, but an offer didn’t come through until after Hagman’s November death. read more

Linda Gray misses Larry Hagman every day. (02/2013): The 'Dallas' actor lost his battle with cancer at the age of 81 in November and Linda - who has played his character JR Ewing's wife Sue Ellen since the late 1970s - is still saddened by her close friend's death.

Patrick Dempsey still knocks on Larry Hagman's trailer door every morning. (01/2013): The 'Dallas' star lost his battle with cancer aged 81 in November and Patrick – who has been a close friend of Larry ever since they starred on the original 'Dallas' together – revealed he misses his friend on the set of the reboot since he passed away.

Larry Hagman's ranch selling price slashed (12/2012): The asking price of Larry Hagman's California ranch has been slashed by almost half after its original $11 million (£6.8 million) listing failed to attract a buyer.