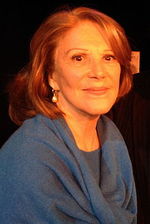 Linda Lavin (born October 15, 1937) is an American actress and singer. She is known for playing the title character in the sitcom Alice and she is also known for her stage performances, both on and Off-Broadway. After acting as a child, Lavin joined the Compass Players in the late 1950s. She began acting on Broadway in the 1960s, earning notice in It's a Bird...It's a Plane...It's Superman in 1966 and receiving her first Tony Award nomination in Last of the Red Hot Lovers in 1970. She moved to Hollywood in 1973 and began to work on television, making recurring appearances on the sitcom Barney Miller before getting the title role on the hit comedy Alice, which ran from 1976 to 1985. She appeared in many telefilms and later she appeared in other TV works. She has also played roles in several feature films. In 1987, she returned to Broadway, starring in Broadway Bound (winning a Tony Award), Gypsy (1990), The Sisters Rosensweig (1993), The Diary of Anne Frank (1997–1998) and The Tale of the Allergist's Wife (2000–2001), among others. In 2010, she appeared as Ruth Steiner in Collected Stories, garnering her fifth Tony nomination. She starred in NBC's short-lived sitcom, Sean Saves the World as Lorna and the CBS sitcom 9JKL. More about Linda Lavin

Current items with a signature of Linda Lavin

These are the most current items with a signature of Linda Lavin that were listed on eBay and on other online stores - click here for more items.

Traded items with a signature of Linda Lavin

The most expensive item with a signature of Linda Lavin (LINDA LAVIN - SCRIPT SIGNED CIRCA 1980) was sold in September 2019 for $220.00 while the cheapest item (LINDA LAVIN SIGNED 3X5 CARD ALICE THE MORNING AFTER) found a new owner for $0.01 in December 2009. The month with the most items sold (4) was January 2021 with an average selling price of $10.00 for an autographed item of Linda Lavin. Sold items reached their highest average selling price in September 2019 with $112.25 and the month that saw the lowest prices with $0.01 was December 2009. In average, an autographed item from Linda Lavin is worth $10.00.

Most recently, these items with a signature of Linda Lavin were sold on eBay - click here for more items.

Philip McKeon, Actor on ‘Alice,’ Dies at 55 (12/11/19): He played the son on the CBS sitcom, which starred Linda Lavin as an aspiring singer turned waitress, for more than half of its run.