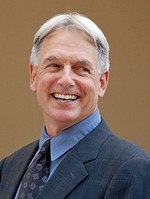 Thomas Mark Harmon (born September 2, 1951) is an American television and film actor. He has appeared in a wide variety of roles since the early 1970s. Initially a college football player, his role on St. Elsewhere led to his being named "Sexiest Man Alive" by People in 1986. After spending the majority of the 1990s as a character actor, he played Secret Service special agent Simon Donovan in The West Wing, receiving a 2002 Emmy Award nomination for his acting in a four-episode story arc. More about Mark Harmon

Current items with a signature of Mark Harmon

These are the most current items with a signature of Mark Harmon that were listed on eBay and on other online stores - click here for more items.

Traded items with a signature of Mark Harmon

The most expensive item with a signature of Mark Harmon (NCIS Cast Signed (7) 11 x 14 PHOTO with JSA Certificate - Mark Harmon, McCallum) was sold in August 2020 for $549.99 while the cheapest item (MARK HARMON AUTOGRAPH-8x10 PHOTO-HOLLYWOOD ACTOR-T.V.SHOW ST. ELSEWHERE.) found a new owner for $0.99 in December 2020. The month with the most items sold (11) was November 2020 with an average selling price of $51.00 for an autographed item of Mark Harmon. Sold items reached their highest average selling price in August 2016 with $137.49 and the month that saw the lowest prices with $1.49 was May 2018. In average, an autographed item from Mark Harmon is worth $20.50.

Most recently, these items with a signature of Mark Harmon were sold on eBay - click here for more items.

Mark Harmon to reimagine Shakespeare's rise for the CW (10/2014): The "NCIS" star will produce "Shakespeare's Sisters," a fantasy drama with the English playwright as its protagonist, The Hollywood Reporter reveals.

George Clooney, Mark Harmon Among 11 Celebrities Who Are Former Athletes (08/2014): Before celebrities like George Clooney and Jason Statham became actors, they were aspiring athletes. While...

Ellen DeGeneres, Mark Harmon are favorite TV personalities (01/2014): When Ellen DeGeneres hosts the Oscars on March 2, she will bring a lot of goodwill with her.

Mark Harmon: Not expanding state Medicaid program is stuff of nightmares (12/2013): Gov. Bill Haslam sat alone in the cold mansion atop the hill. A chilly breeze had developed — $2.8 million every day was flying out the window because he would not expand Medicaid.

Mark Harmon: 'Morally rudderless' Gonzales outrageous pick by Haslam on judicial (11/2013): You may have missed it, unless you stumbled across The Associated Press’ report late last month. Gov. Bill Haslam appointed Alberto Gonzales to a panel charged with nominating candidates for the Tennessee Supreme Court and our appeals courts.

Mark Harmon: ‘I’m not the big dog’ on ‘NCIS’ (09/2013): “NCIS,” starring Mark Harmon, is one of TV’s highest-rated shows and its audience, after 10 seasons, has expanded, not shriveled, with age. The series starts its 11th season Tuesday.

Mark Harmon stands up to cancer in new PSA (06/2013): The "NCIS" star has been chosen as the latest ambassador for Stand Up To Cancer and has filmed a new PSA about cancer immunotherapy

NCIS Star Mark Harmon: A Real-Life Hero To One California Man (05/2013): You know Mark Harmon as Special Agent Gibbs in the hit CBS show NCIS, but for one California man, Harmon is a real-life hero.

The Incredible Inman: Mark Harmon was among attractive cast of ’80s ‘Flamingo Ro (03/2013): By David Inman Q uestion: My husband and I were watching TV and saw a commercial for a program with Mark Harmon. About 20 years ago (give or ...

Friends will hold a fundraiser for Mark Harmon (12/2012): Michael Cook, who has been with Canyons Ski Patrol for 30 years, has known fellow patroller Mark Harmon for a little more than a decade.

Mark Harmon Honored with a Hollywood Walk of Fame Star Pictures (10/2012): We have added a set of pictures from the event "Leonard backstage - Paris Fashion Week". ... more