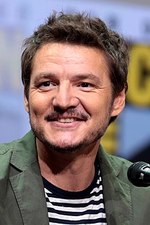 José Pedro Balmaceda Pascal (born 2 April 1975) is a Chilean and American actor. He began his career guest starring on various television shows before rising to prominence for portraying Oberyn Martell on the fourth season of the HBO fantasy series Game of Thrones (2014) and Javier Peña on the Netflix biographic crime series Narcos (2015–2017). Pascal has starred as the title character on the Disney+ Star Wars series The Mandalorian since 2019, reprising his role in the spin-off series The Book of Boba Fett. Outside of television, he has appeared in the films The Great Wall (2016), Kingsman: The Golden Circle (2017), The Equalizer 2 (2018), Triple Frontier (2019), Wonder Woman 1984 (2020), We Can Be Heroes (2020), The Bubble (2022), and The Unbearable Weight of Massive Talent (2022). More about Pedro Pascal

Current items with a signature of Pedro Pascal

These are the most current items with a signature of Pedro Pascal that were listed on eBay and on other online stores - click here for more items.

Traded items with a signature of Pedro Pascal

The most expensive item with a signature of Pedro Pascal (2020 Star Wars Masterwork Autograph PEDRO PASCAL DIN DJARIN MANDALORIAN Auto 1/1) was sold in December 2020 for $9999.99 while the cheapest item (Topps Star Wars Card Trader Mandalorian Series 1 White Signature Pedro Pascal) found a new owner for $0.99 in January 2021. The month with the most items sold (61) was January 2021 with an average selling price of $49.99 for an autographed item of Pedro Pascal. Sold items reached their highest average selling price in December 2020 with $220.00 and the month that saw the lowest prices with $19.99 was December 2015. In average, an autographed item from Pedro Pascal is worth $54.44.

Most recently, these items with a signature of Pedro Pascal were sold on eBay - click here for more items.

HBO's The Last Of Us Reveals New Pic And Casting News That Video Game Fans Will (06/10/22): If you're not already excited for Pedro Pascal's The Last of Us, now is the time to start!

Pedro Pascal Shares Important Way HBO's The Last Of Us Compares To Star Wars' Th (04/15/22): The Mandalorian star Pedro Pascal can't say much about his new show The Last of Us, but revealed how the two series are similar.

The Last Of Us Creator Celebrates Pedro Pascal's HBO Series Wrapping Production (11/08/21): The Last of Us' Neil Druckmann wrapped production the HBO adaptation and took to social media to celebrate.

The Last of Us HBO Series First Look Reveals Pedro Pascal and Bella Ramsey as Jo (09/2021): The first photo from HBO's The Last of Us series looks like it was lifted straight from the video game.

The Last of Us Fan Art Imagines What Pedro Pascal Will Look Like as Joel (02/2021): Fans have been imagining how Pedro Pascal will appear in The Last of Us with one portrait drawing the attention of the video game's creative director.

The Mandalorian Star Pedro Pascal Shoots Down Helmet Rumors (12/2020): The reports on The Mandalorian mask rumour have escalated to the point that it has been claimed that Pascal is planning to leave the series.