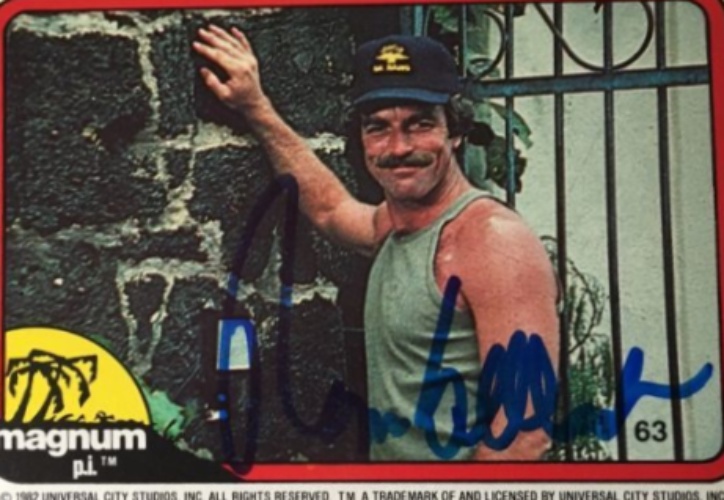 Thomas William Selleck (/ˈsɛlɪk/; born January 29, 1945) is an American actor. His breakout role was playing private investigator Thomas Magnum in the television series Magnum, P.I. (1980–1988), for which he received five Emmy Award nominations for Outstanding Lead Actor in a Drama Series, winning in 1985. Since 2010, Selleck has co-starred as New York City Police Commissioner Frank Reagan in the series Blue Bloods. Beginning in 2005, he has portrayed troubled small-town police chief Jesse Stone in nine television films based on the Robert B. Parker novels. More about Tom Selleck

Current items with a signature of Tom Selleck

These are the most current items with a signature of Tom Selleck that were listed on eBay and on other online stores - click here for more items.

Traded items with a signature of Tom Selleck

The most expensive item with a signature of Tom Selleck (TOM SELLECK SIGNED LICENSE PLATE MAGNUM, P.I. AUTHENTIC AUTOGRAPH BECKETT COA A) was sold in October 2022 for $550.00 while the cheapest item (TOM SELLECK AUTOGRAPHED SEPTEMBER 20, 2011 NYC OFFICIAL CITY GUIDE MAGAZINE) found a new owner for $0.99 in October 2019. The month with the most items sold (34) was May 2021 with an average selling price of $29.99 for an autographed item of Tom Selleck. Sold items reached their highest average selling price in September 2018 with $184.99 and the month that saw the lowest prices with $3.99 was May 2017. In average, an autographed item from Tom Selleck is worth $26.99.

Most recently, these items with a signature of Tom Selleck were sold on eBay - click here for more items.

Tom Selleck Talks Blue Bloods Approaching 300 Episodes And How He Used To Think (11/18/22): As Blue Bloods gets closer to hitting 300 episodes, Tom Selleck reflects on his career as both Frank Reagan and Thomas Magnum.

How CBS' Blue Bloods Season 13 Is Fixing A Plot Hole That Fans Have Questioned F (08/26/22): A Blue Bloods plot hole bigger than Tom Selleck's mustache is getting fixed on CBS and we have the details.

Friends Alum Tom Selleck Reveals Why He Was ‘Scared To Death’ While Guest-Starri (05/01/22): Richard Burke was an integral character on Friends in his handful of episodes, but Tom Selleck was apparently "scared to death" after taking the role.

Blue Bloods’ Tom Selleck Shares Thoughts On Why The CBS Show Has Been So Success (03/13/22): Blue Bloods star Tom Selleck opens up about why the CBS series has been successful for so long, and it makes perfect sense.

How Tom Selleck got famous (04/03/15): With an acting resume that starts with such gem parts as “Stud” in the 1970 farce “Myra Breckinridge” and proceeds to his Emmy- and Golden Globe-winning work on the ’80s TV series “Magnum, P.I.,” Tom Selleck is marking his sixth decade in the biz.

Tom Selleck Has Not Named His Mustache (09/2014): He says he has no problem being the "godfather of the mustache"

Tom Selleck On Early Career & Success On “Blue Bloods” (05/2014): Tom Selleck has kept audiences entertained for decades, and now he’s entertaining fans on the hit CBS drama “Blue Bloods.” But the big roles didn’t always come easy and being an actor isn’t what he wanted to be when he grew up.

NYPD Commissioner Bratton schools Tom Selleck on cop attire (01/2014): Don’t look for police commissioner Bill Bratton to break out the all-black uniform he sometimes wore when he was top cop in Los Angeles. “In New York, the commissioner is...

Daddy's girl all grown-up! Tom Selleck's daughter strips down to lingerie as the (12/2013): The 25-year-old from Los Angeles is the face of a Reviver, an on-the-go freshening wipe designed to remove bad odor from clothing.

Rachael Ray talks Tom Selleck, Thanksgiving & the Wheel of Gravy! (11/2013): The celebrity chef and daytime TV host gives the dish on her plans for the holiday season.

'Blue Bloods': Tom Selleck still draws a crowd (09/2013): Any performer who can bring in 11 million viewers on Friday night these days has a special appeal.

Bettye McCartt, Manager for Tom Selleck, Dies at 81 (08/2013): She worked with the actor since 1975, before he starred on the 1980s hit “Magnum, P.I.” Her other clients included Anthony Quinn and George Clooney. read more

Unveiled, Princess Diana's waltz with Tom Selleck (07/2013): NEW photographs have been revealed from the night that turned Princess Diana into a global superstar as she waltzed at a White House ball with a host of Hollywood stars.

Lawrence O’Donnell Eviscerates NRA ‘Poster Boy’ Tom Selleck: ‘It’s Time To Quest (01/2013): MSNBC's Lawrence O'Donnell went all the way back to a 1999 episode of The Daily Show to gain inspiration for his "Rewrite" segment last night. The subject was Tom Selleck, who became the "poster boy" for the NRA by filming an ad for the organization just one month before the Columbine shooting.

Hunky Tom Selleck Reflects On Life On The Tube (10/2012): He's created indelible images on the small screen and the big screen.

Tom Selleck Unimpressed With Uggie the Dog's Acting (09/2012): The Emmy Icon and star of the "Jesse Stone" TV movie series says his canine co-star gets overlooked in favor of a dog that is "just cute." read more

Tom Selleck explains grey hair (08/2012): Tom Selleck has joked that his wife would leave him if he ever shaved off his moustache.