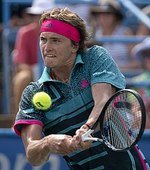 Alexander "Sascha" Zverev (born 20 April 1997) is a German professional tennis player. He has been ranked by the Association of Tennis Professionals (ATP) as high as world No. 3, and has been a permanent fixture in the top 10 since July 2017. Zverev's career highlights include titles at the 2018 and the 2021 ATP Finals and 2020 Tokyo Olympics. He is the only active player outside of the Big Four with five ATP Masters 1000 titles. Zverev has won 19 ATP titles in singles and two in doubles. He reached his first major final at the 2020 US Open, finishing runner-up to Dominic Thiem. More about Alexander Zverev

Current items with a signature of Alexander Zverev

These are the most current items with a signature of Alexander Zverev that were listed on eBay and on other online stores - click here for more items.

Traded items with a signature of Alexander Zverev

Most recently, these items with a signature of Alexander Zverev were sold on eBay - click here for more items.

Nadal Reaches French Open Final on Zverev’s Abrupt Injury (06/03/22): Rafael Nadal and Alexander Zverev had taken more than three hours to get toward the end of a second set. Then Zverev twisted his right ankle and had to stop.

Alexander Zverev Beats Carlos Alcaraz at the French Open (05/31/22): Zverev, the No. 3 seed, will face either No. 5 Rafael Nadal or No. 1 Novak Djokovic in the semifinal round.

Zverev’s Swings Merited More Than a Slap on the Wrist (03/2022): After striking the umpire’s chair during an outburst at a tournament in Mexico, Alexander Zverev can avoid a fine and suspension if he does not commit further violations for one year.

Alexander Zverev fined $40K, will forfeit $30K in prize money after chair-slammi (02/2022): The world No. 3 yelled obscenities toward an umpire and repeatedly smacked his chair after losing in a doubles match on Tuesday

With a Second ATP Finals Win, Alexander Zverev Proves He Is Rising (11/2021): This year gave the 24-year-old German star six singles titles, Olympic gold, an ATP Finals trophy, but also an ongoing tour investigation into allegations of physical abuse against a former girlfriend.

Dominic Thiem Comes Back From Down 2 Sets to Win U.S. Open Final (09/2020): Thiem stormed back to beat Alexander Zverev for the title in a fifth-set tiebreaker.