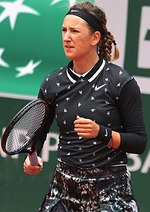 Victória Fyódarauna Azárenka (Belarusian: Вікторыя Фёдараўна Азаранка; Russian: Виктория Фёдоровна Азаренко; born 31 July 1989) is a Belarusian professional tennis player. Azarenka is a former world No. 1 in singles, having claimed the top ranking for the first time on 30 January 2012. She was the year-end No. 1 in 2012 and has held the top ranking for a combined total of 51 weeks. Azarenka has won 21 WTA singles titles, including two Grand Slam singles titles at the 2012 and 2013 Australian Open, becoming the first Belarusian player, male or female, to win a Grand Slam tournament singles title. Azarenka is also a three-time major finalist at the US Open, finishing runner-up to Serena Williams in both 2012 and 2013 and to Naomi Osaka in 2020. Her other important singles achievements include winning six Premier Mandatory tournaments (including the Sunshine Double in 2016), four Premier 5 tournaments, and the singles bronze medal at the 2012 Summer Olympics in London, as well as being the runner-up at the 2011 WTA Finals to Petra Kvitová, reaching three additional Grand Slam singles semifinals (Wimbledon in 2011 and 2012 and the French Open in 2013), and an additional nine major quarterfinal appearances. She finished with a year-end top 10 singles ranking for five consecutive years between 2009 and 2013. More about Victoria Azarenka

Current items with a signature of Victoria Azarenka

These are the most current items with a signature of Victoria Azarenka that were listed on eBay and on other online stores - click here for more items.

Traded items with a signature of Victoria Azarenka

Most recently, these items with a signature of Victoria Azarenka were sold on eBay - click here for more items.

Tennis Suspends Russia and Belarus but Will Allow Their Players to Compete (03/01/22): The move will allow stars like Daniil Medvedev of Russia and Victoria Azarenka of Belarus to participate in tournaments but as neutral players with no national identification.

For Victoria Azarenka, Disappointment Again, but Plenty of Hope (09/13/20): Unseeded coming into the U.S. Open and far removed from a time when she was at the top of the women’s game, Azarenka showed how dangerous she could be. Will it stick?

2020 US Open: Naomi Osaka and Victoria Azarenka win, will face off in in women's (09/11/20): It's a finals match bred from two great semifinal matches