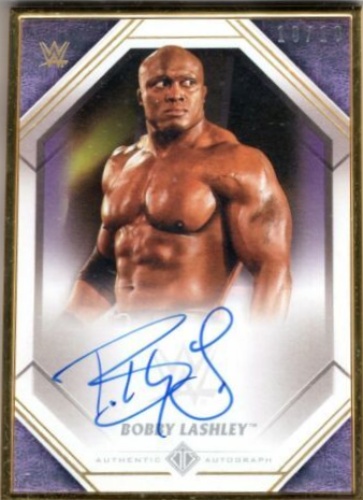 Franklin Roberto Lashley (born July 16, 1976) is an American professional wrestler, mixed martial artist and bodybuilder. He is currently signed with WWE, where he performs on the Raw brand under the ring name Bobby Lashley and is the current WWE United States Champion in his third reign. He is an eight-time world champion, having been a two-time WWE Champion, two-time ECW World Champion, and four-time Impact World Heavyweight Champion. Lashley is also known for his mixed martial arts (MMA) career in Bellator MMA and Strikeforce. More about Bobby Lashley

Current items with a signature of Bobby Lashley

These are the most current items with a signature of Bobby Lashley that were listed on eBay and on other online stores - click here for more items.

Traded items with a signature of Bobby Lashley

The most expensive item with a signature of Bobby Lashley (BOBBY LASHLEY 2022 PANINI IMPECCABLE CHAMP DEBUTS AUTO AUTOGRAPH CARD #19/21) was sold in November 2022 for $449.00 while the cheapest item (bobby lashley wwe autographed wrestling card signed wwf) found a new owner for $0.30 in August 2008. The month with the most items sold (19) was January 2022 with an average selling price of $15.00 for an autographed item of Bobby Lashley. Sold items reached their highest average selling price in April 2017 with $149.99 and the month that saw the lowest prices with $0.99 was March 2020. In average, an autographed item from Bobby Lashley is worth $12.14.

Most recently, these items with a signature of Bobby Lashley were sold on eBay - click here for more items.

Bobby Lashley expects feud with Brock Lesnar to go beyond Crown Jewel: 'Always g (11/02/22): Lashley is enjoying the build to Crown Jewel after an unsatisfying conclusion to his first match with Lesnar

Bobby Lashley gained confidence, brushed off negativity as long-awaited WWE cham (03/01/21): Lashley spoke to CBS Sports about his time in WWE as well as his upcoming title match with The Miz

Former WWE star Bobby Lashley signs long-term deal with Bellator (03/2015): MANILA, Philippines – Former World Wrestling Entertainment (WWE) superstar Bobby Lashley has inked a long-term contract extension with Bellator MMA. The announcement was made on Saturday, March 21 (PH Time) via press release, but the terms and other details of the deal were not revealed. "I've ...

Bobby Lashley Discusses CM Punk In The UFC, TNA Competing With WWE & Lots More I (02/2015): TNA World Champion Bobby Lashley recently spoke with the folks at "Give Me Sport" about his feelings on how TNA can compete with WWE , the differences between his first run in TNA and his current run, CM Punk transitioning from pro wrestling to mixed-martial-arts an more.

Bobby Lashley Discusses His TNA & MMA Careers, Being Excited For TNA's Current U (01/2015): Like this post? Share it! TNA World Champion Bobby Lashley recently spoke with Sports Vibe TV, discussing his busy schedule, being excited for the UK tour, dealing with his injuries, the feeling that he is running on fumes and more.

TNA References Bobby Lashley's Bellator 130 Win ... But No Mention Of SpikeTV - (10/2014): Like this post? Share it! TNA has made reference to Bobby Lashley’s win at Bellator 130 on Friday night, posting the following to promote this week’s episode of iMPACT.

Bobby Lashley Confirmed For MMA Fight With Undefeated Contender On Oct. 24th (09/2014): Like this post? Share it! Want to write for eWrestlingNews.com? Connect now and find out how to contribute.

Davey Richards Undergoes MRI, Bobby Lashley At The VMAs (08/2014): Like this post? Share it! -- Davey Richards got an MRI last week, and the good news is that his leg injury is said to be a "minor break". Word is that Richards could be back in the ring before the next set of TNA TV tapings.

Update On Bobby Lashley's MMA Return At Bellator 123 In September (07/2014): Want to write for eWrestlingNews.com? Connect now and find out how to contribute.

Bobby Lashley Back! (03/2014): Let's evaluate: what's Lashley been doing lately? Not much that I know of. His MMA aspirations seem to have fizzled out, which is probably a good thing in the bigger picture.

Ex-WWE star Bobby Lashley seeks multi-fight deal, wants four more fights in 2013 (07/2013): After fighting just once in all of 2012, heavyweight Bobby Lashley racked up two wins in the past month alone. If things go according to his plans, Lashley could have as many as six fights under his belt by year's end.

Bobby Lashley, Kendall Grove, Andre Winner among winners at GWC 1 (06/2013): It didn't take long for Bobby Lashley to show exactly what he wanted to do on Saturday night. Lashley made quick work of Matthew Larson at "Global Warrior Challenge: British Invasion."