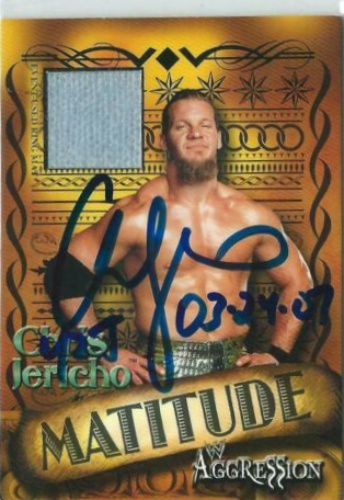 Christopher Keith Irvine (born November 9, 1970), better known by the ring name Chris Jericho, is an American-Canadian professional wrestler and singer. He is currently signed to All Elite Wrestling (AEW), where he is the leader of the stable Jericho Appreciation Society. Noted for his over-the-top rock star persona, he has been named by journalists and industry colleagues as one of the greatest professional wrestlers of all time. More about Chris Jericho

Current items with a signature of Chris Jericho

These are the most current items with a signature of Chris Jericho that were listed on eBay and on other online stores - click here for more items.

Traded items with a signature of Chris Jericho

The most expensive item with a signature of Chris Jericho (1998 Topps WCW/NWO Authentic CHRIS JERICHO Rookie Autograph BGS 9 Mint AEW Pop 1) was sold in August 2021 for $4900.00 while the cheapest item (Chris Jericho Signed Bookplate AUTO Autographed COA) found a new owner for $0.99 in September 2022. The month with the most items sold (19) was September 2021 with an average selling price of $29.99 for an autographed item of Chris Jericho. Sold items reached their highest average selling price in July 2012 with $201.25 and the month that saw the lowest prices with $1.37 was January 2010. In average, an autographed item from Chris Jericho is worth $25.00.

Most recently, these items with a signature of Chris Jericho were sold on eBay - click here for more items.

Chris Jericho explores the life and death of Chris Benoit 'probably for the last (03/24/20): Jericho and Benoit share a history together in the pro wrestling business that few can revisit these days

Chris Jericho says he won’t bring back ‘The List’ if he returns to WWE | Wrestli (12/2018): It’s no secret that Chris Jericho is one of the best wrestlers in the history of pro wrestling, but one of the many reasons that he is such a big star is due to the fact that he continues to reinvent himself. One of the biggest acts that he got over was a list. This […]

Fozzy's Chris Jericho Wouldn't Mind Never Wrestling Again Recap (03/2015): Fozzy frontman Chris Jericho says he'd be happy if he never wrestles again. The singer and WWE superstar balances his musical career with his stints in the ring, but says the band is now his priority

Photos Of Chris Jericho & His Kids + Cesaro/Kidd/Natalya Backstage At RAW Last N (02/2015): Like this post? Share it! -- Chris Jericho posted the following pic to Instagram of him and his kids in Tampa, Florida for the WWE house shows over the weekend.

Chris Jericho Defends Metallica's Lulu Project With Lou Reed (10/2014): Fozzy frontman Chris Jericho is among the many Metallica fans who didn't like their controversial collaboration with Lou Reed with the Lulu album - but he's glad they made it

Batista Appears On Chris Jericho's Podcast + The Current WWE NXT Takeover 2 Card (08/2014): Like this post? Share it! -- PodcastOne.com has the latest episode of Chris Jericho's podcast , Talk is Jericho, featuring an interview with Batista . You can listen to the full episode at the above link.

Chris Jericho Discusses The Upcoming Fozzy Tour, His Influences And More (07/2014): Alex Obert: Would you ever look into an opportunity for Michael Starr to appear at a Fozzy show and sing Tonite with you?

Chris Jericho Launches Fund For A Terminally Ill Fan (06/2014): Chris Jericho has released a special Youtube version of his Talk is Jericho Podcast. Jericho did this to help his friend Daniel House, who is battling stage 4 bowel cancer. House's condition is terminal, and his wishes before he passed away was to meet Jericho and see Fozzy perform live.

Chris Jericho Responds To Question On His Future (12/2013): Chris Jericho recently spoke to Australian-based music website Spaceship News about wrestling, touring and Fozzy’s upcoming tour with Steel Panther. During the interview, the multi-time champion was asked about his plans for 2014.

Wrestling Pro Chris Jericho to Star in Web Comedy (10/2013): The Canadian 10-parter, which co-stars Andy Kindler and Scott Thompson, features the veteran TV wrestler struggling to make it as an actor. read more

Chris Jericho Discusses Putting Over Younger Talent (09/2013): Chris Jericho spoke to Chris Van Vliet of WOIO-TV on if he wants to accomplish anything more in WWE.

Chris Jericho Discusses Match Quality During Last WWE Run | TWNP - Wrestling New (08/2013): Chris Jericho spoke with Donald Wood about taking time away from WWE and his match quality during his last run with World Wrestling Entertainment. “People are always putting words in my mouth I never once used the word hiatus or retirement; I’m just not working there,” Jericho said.

Third #August1Warning Video Released: Chris Jericho Referenced (07/2013): TNA has released a third #August1Warning video, which they say arrived at the company's headquarters on Tuesday afternoon. In this installment, the mystery man says, "You speculate, I laugh."

Paul Heyman, Chris Jericho, Mick Foley, Dolph Ziggler and Others Comment on Curt (05/2013): Chris Jericho: "Proud & excited for the debut of #CurtisAxel! He’s been waitin for this his whole life. Somewhere Mr Perfect is smiling his mischievous grin"

Chris Jericho on drifting from WWE, very mean robots (04/2013): Tampa's own Chris Jericho is a pretty fearless guy, but when it comes to giant robots with mean uppe

Chris Jericho is the only active veteran that "gets it". (03/2013): I've heard alot of mixed reactions about the possible Jericho vs. Fandango match at WrestleMania 29. How this is a waste of time. How Fandango dosen't deserve this match for his re-debut. How Jericho should be put in a title picture or a high profile match instead.

Chris Jericho and Seth Rollins Trade Shots on Twitter, Photo of Wade Barrett wit (12/2012): Rollins: "#justicelives in our hearts. And we will not be held down another second. Believe in righteousness. Believe in hope. #believeintheshield" Rollins: "@IAmJericho Not just talking, but actualizing.

Chris Jericho Idea... (10/2012): I have been thinking when Chris Jericho returns maybe have him form a new team with perhaps him plus 4 others in it made up of new superstars from NXT! The name I came up with also is NxtJeriNation... but what members could he help get over?

Chris Jericho: 'Fozzy Is Not A Vanity Project' (09/2012): The long-time wrestler has left WWE to tour with his band, Fozzy.

Chris Jericho On How His Departure Was Handled, Original Storyline Plans, Triple (08/2012): On him leaving the WWE for a while: "Vince knew and I knew for the entire run that I would be leaving as soon as the new record came out (Sin and Bones). We knew the entire time what my time frame was.

Chael Sonnen Shoots Down WWE Rumors, PAC To WWE Confirmed, Chris Jericho (07/2012): Sonnen said he'd go to the WWE as a fan, "but I go back to my promoter Dana White at the end of the night."

Chris Jericho Says Music Is His Number One Priority, Continues Countdown (06/2012): Speaking to Fighting Spirit Magazine , Chris Jericho says his number one priority is Fozzy. "When I was a kid I had two dreams, I wanted to be in a rock 'n' roll band and I wanted to be a wrestler, and I’m very fortunate that I got to do both at the highest level.

WWE apologizes to Brazil after Canadian Chris Jericho stomps on flag (05/2012): Professional wrestling managers say they have apologized to the Brazillian government for an incident where one of the sport's biggest stars, Canadian Chris Jericho, crumpled the country's flag and stomped on it during a performance on Thursday in Sao Paulo.

WWE Raw: Chris Jericho's feud with CM Punk getting personal (03/2012): What's the point of Jericho bringing up the demons of Punk's family? Personal demons have long been exploited for the sake of advancing a professional wrestling storyline.

Jim Ross Blogs About RAW: CM Punk & Chris Jericho, The Rock & John Cena (02/2012): WWE Hall of Famer Jim Ross is back with another blog update, which you can read in its entirety at JRsBarBQ.com . In this entry, JR talks in-depth about Monday's eventful RAW, last weekend's UFC pay-per-view from Japan and more.

Straight Shoot: Chris Jericho Is A New Type Of Heel (01/2012): Chris Jericho is back! But is he a new style of heel? After weeks of build-up, the series of bizarre inexplicable promos airing on Monday Night Raw were finally paid off with the return of Chris Jericho.

Chris Jericho vs CM Punk: whose side are you on? (11/2011): Assuming that this great matchup does happen next year, who will you be pulling for? I really enjoy what Punk does, but I'd have to go with Jericho. To me, he's one of, if not the best entertainer in wrestling. But one things for sure, we'll get the best matches we've seen in a long time.

Will the real Chris Jericho please stand up? (09/2011): You know I'm gonna fire off a quick rant because I'm sick of seeing this. Chris Jericho and Austin and others talking about people stealing their stuff.

Chris Jericho Talks WWE Return, Wrestling Undertaker At WM28 & More (06/2011): Former WWE star Chris Jericho was interviewed by TheSuplex.com on Wednesday night - and you can listen to audio of the interview below. Here are some of the topics discussed: - FOZZY - His return to WWE?

Chris Jericho and band Fozzy to play Red Dog on Friday night (05/2011): Chris Jericho may be best known as a former WWE wrestler, or even a Dancing with the Stars contestant. Or maybe as a game-show host. But on Friday, Peterborough will know him as a howling rock singer. The American band Fozzy plays the Red Dog Friday night.[...]

Chris Jericho: Dancing Producers Only Showed My Serious Side (04/2011): The latest contestant to be eliminated says he and partner Cheryl Burke had a lot of fun on the show

Chris Jericho Blasts TNA For The "Bush League" 3/3/11 Video (02/2011): Chris Jericho appeared on the Live Audio Wrestling radio show over the weekend and ripped apart TNA for the lame "3/3/11" video that aired at the end of last week's iMPACT! TNA had hyped the "most shocking moment of the year" - and delivered a weak ripoff of WWE's recent 2/21/11 videos.