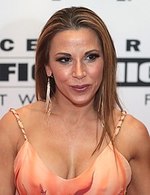 Mickie Laree James-Aldis (born August 31, 1979) is an American professional wrestler and country singer. As a wrestler, she is a commentator for WWE's brand Main Event and performs under WWE's SmackDown brand. More about Mickie James

The most expensive item with a signature of Mickie James (WWE MICKIE JAMES SIGNED NEW DIVA BELT WITH EXACT PROOF) was sold on eBay in March 2010 for $629.99 while the cheapest item (Mickie James WWE Autographed Signed 4x6 Photo) found a new owner for $0.55 in August 2008. The month with the most items sold (35) was March 2010 with an average selling price of $9.99 for an autographed item of Mickie James. Sold items reached their highest average selling price in June 2015 with $74.99 and the month that saw the lowest prices with $1.00 was October 2016. In average, an autographed item from Mickie James is worth $12.99.

Current items with a signature of Mickie James

These are the most current items with a signature of Mickie James that were listed on eBay and on other online stores - click here for more items.

Traded items with a signature of Mickie James

Most recently, these items with a signature of Mickie James were sold on eBay - click here for more items.

Former TNA Knockout/WWE Diva Mickie James & TNA Star Magnus Get Engaged - Detail (12/26/14): Like this post? Share it! "I was waiting for it to fit to make the big announcement… But apparently my friends & family are way too nosey & smart for that! Lol! Im so excited to announce our engagement!!! Love love love!!!

Mickie James To Appear At Tonight's 'Queens Of Combat 3' iPPV Event, Lucha Under (11/30/14): Like this post? Share it! Want to write for eWrestlingNews.com? Connect now and find out how to contribute.

Former WWE Diva/TNA Knockout Mickie James Comments On Giving Birth To A Baby Boy (09/28/14): Like this post? Share it! Mickie James tweeted the following after she gave birth to a new baby boy over the weekend. Mickie and and Magnus are now the proud parents of Donovan Patrick Aldis:

Today In Pro Wrestling History Summerslam '93 & '98, Sunday Night Heat, Mickie J (08/2014): Like this post? Share it! Want to write for eWrestlingNews.com? Connect now and find out how to contribute.

Mickie James Confirms Pregnancy Reports (05/2014): Former WWE Diva and TNA Knockout Mickie James confirmed reports during her appearance on Totally Driven Radio that she is pregnant and that she is due in September.

Mickie James enjoyed riding in a parade, eager to return for WrestleMania week (03/2014): Mickie James, who for now is wrestling on the independent circuit, will be back in New Orleans for the week of WrestleMania 30 to participate in several events.

Mickie James Talks About Her Visit to the WWE Performance Center, TNA Locker Roo (02/2014): Mickie James recently spoke with Aaron Oster of The Baltimore Sun. Here are some highlights. What the TNA locker room was like before she left: It was cool. It was going through a lot of changes. It was going from just taping in Orlando to taking the big jump and doing the live tapings on the road.

WWE Star Has Neck Surgery, Mickie James WWE Performance Center (01/2014): “I got a call from the WWE about coming down and working with some of the girls. I’m interested in learning about the other side of the business so I thought it was a great opportunity. Having trained in small gyms and garages, it was an impressive site to see and nice to work with the WWE.”

Mickie James Comments on Helping the Divas Out & Possible Return (11/2013): Former Women’s and Divas Champion Mickie James sparked rumors of a possible return to WWE this week by rekindling her relationship with World Wrestling Entertainment.

Mickie James *spoilers* (09/2013): according to the front page, Mickie James has parted ways with TNA. This comes after she drop(s)(ped) her title on the iMPACT! taping.

Mickie James on Who She’d Like to Wrestle, Traveling with TNA Officials & More (08/2013): 4th & Pain recently spoke with TNA Knockouts Champion Mick James. Here are some of the topics discussed. * Second country album release: “I should have carried my belt at the CMT Awards and sat down on the stage.”

Mickie James' CD not just a vanity project (06/2013): TNA Knockout Mickie James has recently regained gold in the form of the Knockouts Championship. But she's probably hoping that she'll earn more gold, in the form of a gold album, with the recent release of her second country music CD.

Second album a milestone for Mickie James (05/2013): Tonight, Impact Wrestling will feature a Knockouts Title match between Velvet Sky and Mickie James; but as she fights in the ring, the siren from Virginia is also waging another battle – on the country music charts.

Incoming heel turn - Mickie James (04/2013): I just saw this and it validated my thoughts since her return to tv. I say its about time. Thoughts?

Mickie James Talks About Flying with the Title Belt, Leaving the Impact Zone, Mo (03/2013): As noted yesterday, Mickie James sat down with Brandon Baxter for an interview. Here are some highlights. What it’s like being outside the Impact Zone: “Oh my gosh, it’s incredible. It’s so incredible, because the live crowd.

Michelle McCool Talks About Working with Mickie James (12/2012): Stomping Grounds: “Piggie James was the storyline that brought LayCool to fruition and really started and helped develop our characters. It was a main storyline that, at the time, started giving Divas more screen time and longer matches — we even had a huge celebration.

Mickie James Making TV Return To TNA This Thursday; Changes To The Knockouts Div (11/2012): This Thursday's Impact Wrestling broadcast will feature the television return of Mickie James as she has been announced to compete in a #1 Contender Knockout Battle Royal for the TNA Women's Knockout Championship currently held by Tara.

Mickie James Taking Time Off To Nurse Rib Injury, Comments On Her TNA Status (09/2012): Mickie James is taking a few weeks off from competing to nurse a rib injury. She aggravated the injury during TNA Wrestling's live event tour last week.

Former WWE Star Says Mickie James 'Got Crazy' When John Cena Broke Up With Her (06/2012): Kenn Doane, formerly Kenny Dykstra and Kenny from the Spirit Squad, has continued dishing dirt via Twitter regarding John Cena and Mickie James' relationship years ago.

Mickie James Interview - Whether She Would Return To WWE, Knockouts Division (05/2012): Mickie James spoke to Mike Buda of SportstownChicago.com promoting her match on June 30 against Melina at the Coliseo Ruben Rodriguez in Bayamon, Puerto Rico. During the interview, the multi-time women's champion commented on whether she would consider returning to WWE.

Mickie James On Why She Travels On The Road By Herself, Stacy Keibler, Injuries (08/2011): Mickie James spoke with Ledger-Enquirer.com to promote TNA Wrestling's live event yesterday in Columbus, Georgia. Highlights from the interview are as follows:

TMZ Reports, Steve Corino, Mickie James and Tough Enough (06/2011): TMZ is reporting that Tough Enough’s Michelle has separated from her husband Johnny Fairplay. They have apparently filed for divorce in North Carolina.

The Rock Praises Mickie James! (02/2011): TNA Knockout Mickie James caught Dwayne "The Rock" Johnson's long awaited return to World Wrestling Entertainment yesterday, writing on Twitter: "Finally getting a chance to catch up on @TheRock's charismatic return... Literally got chills... & remembered why I do... What I do!"

Mickie James Discusses Joining TNA, Being Single, Her Music & More (01/2011): TNA's Mickie James and Jeremy Borash were on the Monsters in the Morning show in Orlando (XM 152). - She talked about this being her first country album, Strangers & Angels. The hosts asked her how we can get more people into country music.

Mickie James Discusses Her Singing Debut on iMPACT! and Leaving WWE (12/2010): Her Signing Debut: "I was really singing during that performance, because I thought in my mind as a performer, you know, you can do it one of two ways. Because it is a show, and TV, and you can do things a number of ways.