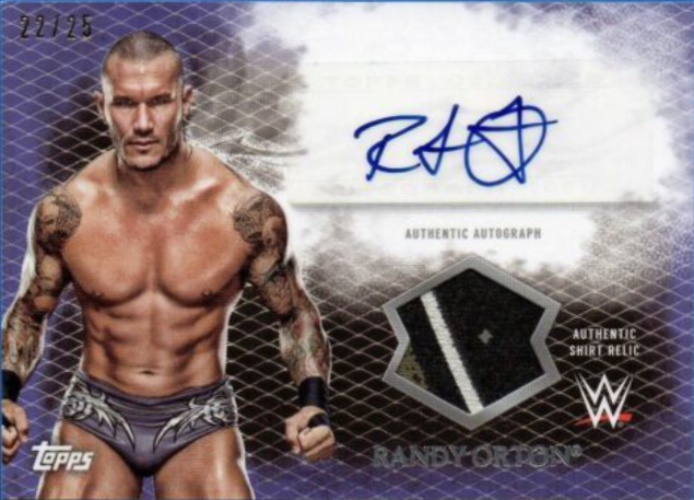 Current items with a signature of Randy Orton

These are the most current items with a signature of Randy Orton that were listed on eBay and on other online stores - click here for more items.

Traded items with a signature of Randy Orton

The most expensive item with a signature of Randy Orton (RANDY ORTON 2022 PANINI REVOLUTION WWE LAVA AUTO # /10 AUTOGRAPH SSP PARALLEL) was sold in June 2022 for $2425.00 while the cheapest item (2021 Topps SLAM Randy Orton & Matt Riddle Fire White Dual Signature Super Rare D) found a new owner for $0.49 in July 2021. The month with the most items sold (20) was September 2022 with an average selling price of $100.47 for an autographed item of Randy Orton. Sold items reached their highest average selling price in March 2017 with $242.50 and the month that saw the lowest prices with $0.97 was October 2010. In average, an autographed item from Randy Orton is worth $34.99.

Most recently, these items with a signature of Randy Orton were sold on eBay - click here for more items.

Matt Riddle talks record-breaking SummerSlam, the evolution of RK-Bro and his jo (08/27/21): Riddle won the Raw tag titles with Randy Orton at SummerSlam

WWE champion Drew McIntyre tests positive for COVID-19 ahead of scheduled match (01/11/21): McIntyre was set for a main event bout with Randy Orton on Monday's episode of Raw

Randy Orton addresses issues with NXT, Tommaso Ciampa: 'You've got to look at th (06/17/20): Orton wants wrestlers to have lengthy, financially-beneficial careers and doesn't believe the NXT style provides that

2020 WWE Backlash: Edge suffers triceps injury during 'Greatest Wrestling Match (06/16/20): Edge and Randy Orton delivered a fantastic match at Backlash, but now Edge is back on the sidelines

Randy Orton on recent Black Lives Matter support: 'I'm embarrassed to say it, bu (06/2020): Orton, who once spoke out against Colin Kaepernick, recently began tweeting in support of the movement

WWE news, rumors: Randy Orton injury update, what to expect from final Raw of th (12/2019): Orton's live event match with AJ Styles ended abruptly due to what appeared to be a leg injury

Watch Randy Orton's INCREDIBLE Wrestlemania RKO On Seth Rollins (03/2015): Was it the best ever delivered by The Viper? Answer: YES...

Post-Raw Randy Orton fan video, update on Mark Henry injury, more (12/2014): As noted earlier, Randy Orton came out to help Cena and delivered RKO to J&J security and to Seth Rollins. Cena then put out Big Show with the Attitude Adjustment and celebrated with Orton in front of the live crowd.

Backstage News & Updates On When Randy Orton Is Expected To Return, & More News (11/2014): Like this post? Share it! -- As previously reported, there were recent discussions about having a John Cena vs. Randy Orton vs. Seth Rollins three-way TLC match for WWE TLC. However, a source notes that there is talk about pushing Orton’s first return appearance back until the actual PPV.

Randy Orton Comments on a Babyface Turn, His Rematch, Shirt (10/2014): “Yes, but I still have my rematch from April. I think. LoL” Another fan wrote that they don’t ever want Orton to turn babyface because it doesn’t suit him.

Watch Randy Orton, Goldust enter the ring in WWE 2K15 (08/2014): While we still don't know how well the actual wrestling aspect of WWE 2K15 will hold up, these two vignettes - one above and one below the break - demonstrate that the developers certainly understand the over-the-top theatrics that have turned pro...

PHOTO: Randy Orton Receives 12 Stitches After MITB (06/2014): Want to write for eWrestlingNews? Connect now and find out how to contribute.

Backstage Changes For Randy Orton & Sheamus (05/2014): WWE has changed some of their originally intended plans for the future. Originally, Randy Orton was going to switch to a baby face, as the company had even informed their merchandise department to work on some baby face items for Orton for down the line.

VIDEO: WWE's Top 10 Looks At Randy Orton's 'RKO' (04/2014): Want to write for eWrestlingNews? Connect now and find out how to contribute your own content.

Chair Shots Wrestlemania Preview: Day 5 (03/2014): Well here we are dear readers, just a few short days away from the biggest event of the year.

RANDY ORTON clap clap clapclapclap (01/2014): I think Orton is incredible in the ring and love his current persona. Do other people feel this way? Or are you sick of him? I pretty much think JBLs hack commentary about him is right.

Is Randy Orton Best for the WWE's Business (12/2013): Randy Orton is a polarizing figure who has had many controversies in his tenure as a WWE Superstar. Can he be trusted as a top guy in the company? Contributor: Power Howard Published: Dec 23, 2013

Randy Orton Retains His Title During WWE Survivor Series 2013 (11/2013): Find out how Randy managed to take down The Big Show, then get all the results from one of the WWE’s biggest nights!

Goldust Talks About a Singles Match Against Cody, His Recent Match with Randy Or (09/2013): The health benefits he has seen since starting DDP Yoga: "With DPP Yoga, there are a couple benefits. I stand up straighter now, and I can bend in ways I couldn't bend. I feel so much better: my joints, muscles, and bones. It is awesome."

Daniel Bryan and Randy Orton Fined By WWE For Chair Shot Exchange On Monday's Ra (06/2013): “We don’t allow chair shots to the head in WWE,” said Paul "Triple H" Levesque, WWE's Executive Vice President, Talent and Live Events. “We understand it was in the heat of the moment but we take this very seriously and as a result, [Orton and Bryan] were fined.”

Press Release For "12 Rounds: Reloaded" Starring Randy Orton (05/2013): A twisted genius and a good man are going head-to-head in the ultimate game of cat and mouse!

Poor Randy Orton ... (04/2013): I feel bad for the guy. Word going around that he was upset at the crowd being disinterested in his match. Honestly, I'd be mad if I was in Randy Orton's shoes too. I think this is the first time any crowd has been so uninterested in Orton. The feeling of being uninteresting cannot feel good to him.

When will Randy Orton Main Event another Wrestlemania? (01/2013): I love Randy Orton, but I noticed he hasn't been main-evented a Wrestlemania since his match with Triple H. I always felt Randy Orton's storylines heading into Wrestlemania are always great.

Latest Episode of WWE's OTR, Mark Henry at TLC?, The Rock, Rick Steiner, Randy O (12/2012): Randy Orton is featured in the Superstar Spotlight on WWE's website. - WWE is now officially advertising The Rock for Elimination Chamber. Previously, just the arena was advertising him.

The Randy Orton Push 2013 (11/2012): So, according to reports, Randy Orton has been earmarked for a big push soon. How do you think WWE should go about it?

Randy Orton Disputes Reports Concerning His Past (08/2012): Randy Orton took to Twitter Tuesday evening to dispute online reports stating that his starring role in the WWE Studios and Twentieth Century Fox Home Entertainment film The Marine: Homefront was nixed after companies were informed of his dishonorable discharge from the Marines.

Randy Orton Comments On His Return To Raw, Says He Was On "Vacation" (07/2012): Randy Orton returned to action Monday night on Raw after serving a 60-day suspension for his second violation of WWE's Talent Wellness Program.

The Bright Side: Vacant Apex (05/2012): Greetings, mizfan fans! Ok, ok, I’m sure there was a virtual chorus of boos just now, so to any of you who were eagerly waiting the Positivity Report for the latest episode of Smackdown, I apologize for my unexpected absence.

The Return of the Mega Powers: John Cena & Randy Orton (10/2011): Hey guys, Knox here. Whats up with everyone, hope all is going smooth. I'm blogging on the forming of a possible tag team that would shake things up. I want to see the leaders of the new Era as a tag team. I'm talking about John Cena & Randy Orton.

Randy Orton causes Severe Bleeding on Cody Rhodes in SmackDown (09/2011): Remember Me? If this is your first visit, be sure to check out the FAQ by clicking the link above. You may have to register before you can post: click the register link above to proceed. To start viewing messages, select the forum that you want to visit from the selection below.

Why Randy Orton is Still Good (05/2011): Randy Orton has been a buzzing topic in the Internet Wrestling Community of late. In the past year, he fell in the eyes of the majority of the IWC. I honestly have to disagree with those who say he should not be the number #1 guy on SmackDown and here' why:

Randy Orton Discusses His WrestleMania Match, Being Face vs. Heel & More (03/2011): You’ve been working as a babyface – although you’re certainly not a traditional babyface – for about a year now. Are you feeling comfortable in that role?