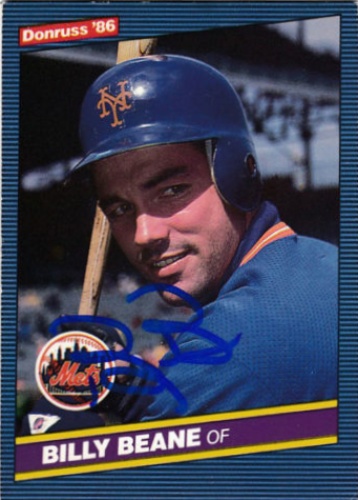 William Lamar Beane III (born March 29, 1962) is an American former professional baseball player and current front office executive. He is the executive vice president of baseball operations and minority owner of the Oakland Athletics of Major League Baseball (MLB); he is also minority owner of Barnsley FC of the EFL Championship in England and AZ Alkmaar of the Eredivisie in the Netherlands. From 1984 to 1989 he played in MLB as an outfielder for the New York Mets, Minnesota Twins, Detroit Tigers, and Oakland Athletics. He joined the Athletics' front office as a scout in 1990, was named general manager after the 1997 season, and was promoted to executive vice president after the 2015 season. More about Billy Beane

Current items with a signature of Billy Beane

These are the most current items with a signature of Billy Beane that were listed on eBay and on other online stores - click here for more items.

Traded items with a signature of Billy Beane

If you're interested in Billy Beane Rookie cards you might want to take a look at our sister site that specializes in Baseball Rookie Cards only.

The most expensive item with a signature of Billy Beane (Billy Beane Autographed ROMLB with JSA) was sold in September 2013 for $750.00 while the cheapest item (BILLY BEANE Authentic Hand Signed Autograph 4x6 Photo - OAKLAND ATHLETICS GM) found a new owner for $0.75 in May 2022. The month with the most items sold (11) was January 2013 with an average selling price of $10.50 for an autographed item of Billy Beane. Sold items reached their highest average selling price in September 2013 with $381.00 and the month that saw the lowest prices with $0.99 was April 2009. In average, an autographed item from Billy Beane is worth $10.50.

Most recently, these items with a signature of Billy Beane were sold on eBay - click here for more items.

MLB rumors: Mets may have interest in adding Oakland's Billy Beane to front offi (09/18/21): The Mets appear bound for a front office makeover this offseason

Samson: What a potential deal with Billy Beane's group means for John Henry and (10/13/20): Samson weighed in on the latest Nothing Personal with David Samson podcast

Oakland Athletics executive Billy Beane could leave baseball if Red Sox deal goe (10/12/20): Beane is co-chairman of a company looking to buy a piece of the Red Sox

Why the Athletics are set to reconstruct roster after crashing out early again i (10/09/20): Billy Beane and company have a lot of questions to answer before 2021

MLB playoff schedule, updates: Billy Beane's A's look to snap 0-9 skid in winner (10/2020): Thursday brings us five MLB playoff games. Stay here to follow along with the action through the day and night

A's: Billy Beane introduces Oakland players to former teammate Billy Bean (03/2015): Bean, who played with Beane in the same outfield for Triple-A Toledo in 1988, says players and others have been reaching out to him individually

The 12th greatest GM of all time is the real “Moneyball” innovator, not Billy Be (01/2015): Brad Pitt was too young to portray him, though. Maybe Kevin Kline could've?

Billy Beane did not want to trade Josh Donaldson (12/2014): © Dilip Vishwanat/Getty Images Josh Donaldson would still be in Oakland if Billy Beane had a choice. Remember all the speculation about Billy Beane possibly trading Josh Donaldson because of a conflict of personalities ? It looks like we have confirmation that that was not the case.

Billy Beane Shows Why Leaders Can't Leave Data Science to the Data Scientists (09/2014): This article is by Florian Zettelmeyer, director of the Program on Data Analytics at Kellogg School of Business, and Matthias Bolling, a consultant with Egon Zehnder International.

The 'Lespedes' Trade May End Up Being Billy Beane's Biggest Blunder (08/2014): Memo to Ben Cherington: Should Billy Beane call on Sunday,Major League Baseball's waiver trade deadline day, wondering if the Red Sox can try with all their might to sneak a certain Cuban slugger through, theres only one retort: No, you cant have him back.

GameDay: Billy Beane Goes All In With A’s Trade (07/2014): When you go all in in poker you’re betting you’ve got the best hand. Billy Beane won’t know until October if the river card is an Ace or a Joker.

The Beane Count lives! (05/2014): A long time ago, a young baseball writer invented a strange statistic named after a charismatic baseball executive. Both the stat and the exec continue to thrive. Well, one of them's still thriving.

Billy Beane Has a Distinguished List of Distant Relatives, Including Madonna and (10/2013): No wonder Billy Beane is so smart.

Billy Beane and Brian Sabean sit tight (08/2013): By Monte Poole The A's barely cleared their throat and the Giants stayed stone silent as the non-waiver trade deadline passed Wednesday, which should answer the question of how each general manager feels about his team.

Kawakami: Billy Beane has little reason to trade (07/2013): With Athletics built to last, and PED suspensions likely to weaken other American League teams, Oakland GM Billy Beane can sit back and relax-- if it were in his nature

NBC Covers Famous Gay Athletes, Confuses Billy Beane For Billy Bean (04/2013): Wait, that's what Moneyball was about? h/t to Steve E. Update (11:11 p.m.): @ deadspin Good catch. We apologize for the error, and we have corrected it for all other time zones. — NBC Nightly News (@nbcnightlynews) April 29, 2013

Poole: The next generation of Billy Beane's 'Moneyball' is here, and it's rich w (03/2013): Daric Barton, the last vestige of a once-struggling A's franchise who somehow stuck around for years, is gone.

A's general manager Billy Beane could be quieter than usual at meetings (12/2012): NASHVILLE, Tenn. -- The A's, never hesitant to make a splash, are a popular target for other teams at the winter meetings.