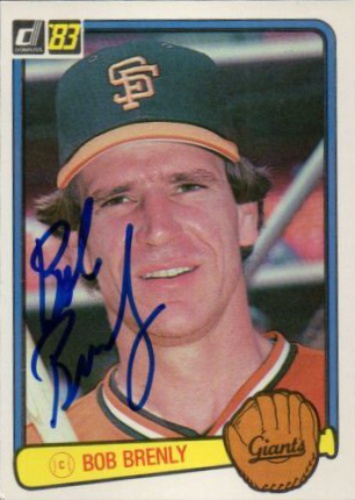 Robert Earl Brenly (born February 25, 1954) is an American baseball sportscaster and a former professional baseball player, coach and manager. He played the majority of his Major League Baseball career as a catcher with the San Francisco Giants. After retiring as a player, Brenly worked as a broadcaster with the Chicago Cubs, then as a coach with the Giants, then as a broadcaster for Fox. He was hired to manage the Arizona Diamondbacks for the 2001 season, and won the franchise's only championship his first year, becoming the fourth rookie manager to win a World Series and first since 1961. In 2004, Brenly was released by the Diamondbacks and again became a broadcaster with the Cubs until 2012. He now serves as a color commentator for Diamondbacks broadcasts. More about Bob Brenly

Current items with a signature of Bob Brenly

These are the most current items with a signature of Bob Brenly that were listed on eBay and on other online stores - click here for more items.

Traded items with a signature of Bob Brenly

Most recently, these items with a signature of Bob Brenly were sold on eBay - click here for more items.

Bob Brenly might get his own street (09/23/13): One of Coshocton's most notable natives might have a city street named after him.

Bob Brenly: robot umps now (05/22/13): He didn’t actually use those words, but I kinda wish he did because I have a lot of fun with the “robot umps now” thing on Twitter. But Brenly does tell Nick Piecoro of the Arizona Republic that he thinks the game is too fast, the technology is too good and the calls are too…

Bob Brenly: 'The Diamondbacks...not a bad Plan B' (02/16/13): Former Chicago Cubs TV analyst Bob Brenly said he was planning to return to the team's broadcast booth last year until a snag in negotiations led to his new job with the Arizona Diamondbacks.

Matt Spiegel A Candidate To Replace Bob Brenly? (10/25/12): Look, with Bob Brenly heading to Arizona, someone needs to fill his chair and keep Len Kasper company.

Bob Brenly leaves Cubs' broadcast booth (10/2012): Cubs analyst Bob Brenly has informed WGN-Ch. 9 that he will not be returning to the team's broadcast booth next year and will instead seek another baseball broadcasting position, the station announced Wednesday.