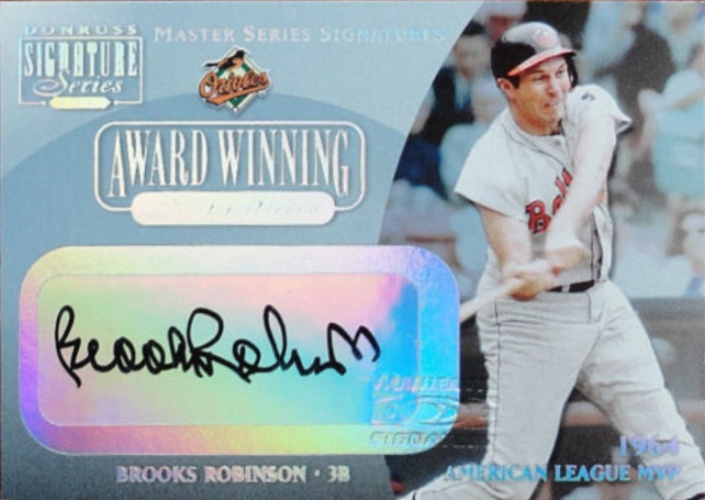 Brooks Calbert Robinson Jr. (born May 18, 1937) is a former third baseman in Major League Baseball who played his entire career for the Baltimore Orioles from 1955 to 1977. Nicknamed "the Human Vacuum Cleaner" or "Mr. Hoover", he is generally considered to have been the greatest defensive third baseman in major league history. A 15-time All-Star, he won 16 consecutive Gold Glove Awards, setting a record later tied by Jim Kaat and broken by Greg Maddux. His 2,870 career games at third base not only exceeded the closest player by nearly 700 games when he retired, but also remain the most games by any player in major league history at a single position. His 23 seasons spent with a single team set a major league record since matched only by Carl Yastrzemski. More about Brooks Robinson

Current items with a signature of Brooks Robinson

These are the most current items with a signature of Brooks Robinson that were listed on eBay and on other online stores - click here for more items.

Traded items with a signature of Brooks Robinson

If you're interested in Brooks Robinson Rookie cards you might want to take a look at our sister site that specializes in Baseball Rookie Cards only.

Most recently, these items with a signature of Brooks Robinson were sold on eBay - click here for more items.

Colorado Rockies: Adam Ottavino on free agency, his “new pitch” from 2018, the p (12/06/18): MLB Network's show MLB Now is hosted by Brian Kenny weekdays at 12 PM MT. It has a recurring panel of 2 MLB Network analysts and insiders and one special g...

When it comes to Baseball Hall of Fame voting, great numbers matter -- and so do (12/02/18): Take this into consideration during the annual Hall of Fame debate

What's your favorite story about Orioles Hall of Famer Brooks Robinson? (05/2014): The Orioles are off today. And I'm traveling from Kansas City on my way to Pittsburgh.

Brooks Robinson sues Seminole Tribe after 2012 casino stage fall (04/2014): Renowned baseball hall-of-famer Brooks Robinson plunged six feet from an unsecured stage during a charity event at the Hard Rock Casino in Hollywood, Fla., two years ago and is now suing the Seminole Tribe for nearly $10 million for his permanent injuries.

Orioles notes and observations (07/2013): The Orioles tried not to make a big deal of Wei-Yin Chen’s absence for nearly two months because of a strained oblique.

Brooks Robinson happy to see 'wonderful' state of the Orioles (05/2013): As the calendar is about to turn to June, the Orioles are 29-24 and find themselves in the midst of the American League playoff race.

Brooks Laich on meeting his namesake, Orioles legend Brooks Robinson (04/2013): Brooks Laich has encountered plenty of enthralled fans during his NHL career, the ones with wide eyes and quickened heartbeats, the ones who can't believe they're actually in the presence of their heroes. Read full article >>

Web Extra: Read Transcript From Brooks Robinson Statue Ceremony (09/2012): Brooks Robinson--immortalized in bronze. The Hall of Fame third-baseman looks back on his 23 seasons with the Orioles at a special statue unveiling at Camden Yards. WJZ has the speech, and reaction from other O's legends.

Brooks Robinson in attendance for Palmer sculpture ceremony (07/2012): Jim Palmer is being honored with his sculpture today.

Brooks Robinson All-Star Game will feature state's best — including an Orioles d (06/2012): Old Mill senior pitcher Josh Hader headlines class for Sunday's 31st-annual showcase As Old Mill senior Josh Hader was driving toward Camden Yards yesterday, he was thinking about the news conference for the 31 s t annual Brooks Robinson All-Star game that he was about to attend at the warehouse.

Brooks Robinson: Building on a career at JSU (10/2011): If you are in need of something built, and someone to build it, Brooks Robinson is probably your man. The junior safety for the Gamecocks loves to build things. Most recently he has built an overhang that covers a grill and table. The overhang is complete with lights and fixtures.