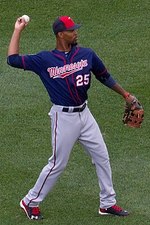 Byron Kerion Buxton (born December 18, 1993) is an American professional baseball center fielder for the Minnesota Twins of Major League Baseball (MLB). He was the second highest-rated prospect in baseball according to MLB.com and Baseball Prospectus in 2015. More about Byron Buxton

Current items with a signature of Byron Buxton

These are the most current items with a signature of Byron Buxton that were listed on eBay and on other online stores - click here for more items.

Traded items with a signature of Byron Buxton

If you're interested in Byron Buxton Rookie cards you might want to take a look at our sister site that specializes in Baseball Rookie Cards only.

The most expensive item with a signature of Byron Buxton (Byron Buxton 2013 Bowman Chrome RC auto autograph GEM MINT Investment Grade Lot) was sold in April 2021 for $6999.00 while the cheapest item (Byron Buxton Topps BUNT 2022 Reverence Red Relic Signature) found a new owner for $0.99 in May 2022. The month with the most items sold (84) was April 2022 with an average selling price of $49.99 for an autographed item of Byron Buxton. Sold items reached their highest average selling price in May 2018 with $149.00 and the month that saw the lowest prices with $2.04 was April 2013. In average, an autographed item from Byron Buxton is worth $30.00.

Most recently, these items with a signature of Byron Buxton were sold on eBay - click here for more items.

Twins star Buxton to have season-ending surgery (09/24/22): Minnesota Twins outfielder Byron Buxton won't return this season and will have surgery on his troublesome right knee.

Twins All-Star Byron Buxton to undergo season-ending knee surgery (09/23/22): Buxton has played in 92 games this season, his most since 2017

Byron Buxton injury update: Twins star hits 10-day injured list with hip issue (08/23/22): Minnesota is fighting for a division title, but will be without its star center fielder for at last 10 days

Twins' Byron Buxton gets chance to start in long-awaited All-Star Game appearanc (07/2022): The former second overall draft pick is finally at the All-Star Game in his eighth MLB season

Byron Buxton of the Twins Is ‘the Best Player in the World’ (05/2022): The Byron Buxton Experience is finally happening for the Minnesota Twins and the team could not be happier. A little caution along the way can’t hurt.

Byron Buxton returns to Twins lineup less than week after hurting knee on slide (04/2022): The injury-prone Minnesota star is starting at DH on Thursday

Talks stall, but Buxton wants to stay with Twins (07/2021): Twins center fielder Byron Buxton still has a strong desire to remain with the organization, even though his agent rejected the latest offer from the team last week.

Twins' Byron Buxton suffers hand fracture shortly after returning from injured l (06/2021): Buxton was hit by a pitch on Monday night and is back on the injured list

Byron Buxton injury update: Struggling Twins lose star outfielder for 'weeks' to (05/2021): Buxton has been one of the best players in baseball in the early going this season

MLB April awards: The best and worst of the month, featuring Braves' Ronald Acuñ (04/2021): May is upon us, so let's revisit the first month of the 2021 season

Twins' Byron Buxton cracks tooth eating steak in latest weird injury of 2021 MLB (03/2021): Buxton joins Brendan McKay of the Tampa Bay Rays and Spencer Torkelson of the Detroit Tigers as players who have had to deal with injuries coming from strange reasons

Buxton, Sano are Baldelli's top priorities as spring training approaches (02/2019): With no Joe Mauer in the lineup and a new manager in Rocco Baldelli, the Minnesota Twins will look a bit different in 2019.

Byron Buxton hopes for big season (01/2015): Twins' top prospect hopes all the injuries are behind him and he can focus on reaching the majors.

Twins: Byron Buxton symptom-free as he recovers from concussion (09/2014): Twins outfield prospect Byron Buxton was free of post-concussion symptoms for several days when he was sent home to Georgia recently.

TwinsCentric: A look at Byron Buxton's swing (01/2014): The mechanics of the top prospect in MLB and the Twins are working with Buxton on smoothing out his swing.

Shooter Now: Will Twins' Byron Buxton outperform Michael Wacha? (10/2013): Pitcher Michael Wacha, 22, who started for the St. Louis Cardinals in Game 2 of the World Series against Boston on Thursday night, was the 19th overall pick out of Texas A&M in the 2012 draft.