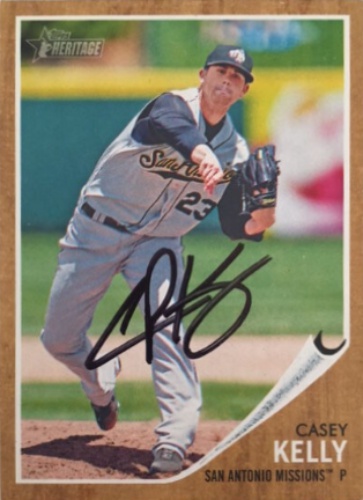 Casey Patrick Kelly (born October 4, 1989) is an American professional baseball pitcher for the LG Twins of the KBO League. He was a first-round draft choice, 30th overall, in the 2008 Major League Baseball Draft by the Boston Red Sox. Kelly was the top minor league prospect in the Red Sox organization when he was acquired by the San Diego Padres after the 2010 season, along with three other prospects, in exchange for All-Star player Adrián González. He made his Major League Baseball (MLB) debut with San Diego in 2012, but underwent Tommy John surgery the following year. Kelly was traded to the Atlanta Braves after the 2015 season. He has also pitched for the San Francisco Giants. More about Casey Kelly

Current items with a signature of Casey Kelly

These are the most current items with a signature of Casey Kelly that were listed on eBay and on other online stores - click here for more items.

Traded items with a signature of Casey Kelly

The most expensive item with a signature of Casey Kelly (CASEY KELLY HAND SIGNED AUTOGRAPHED BASEBALL BALLS LOT OF 30 MLB AUTHENTIC) was sold in January 2013 for $137.50 while the cheapest item (2013 Bowman Chrome Baseball #ACR-CK CASEY KELLY * ROOKIE * AUTOGRAPH * Padres) found a new owner for $0.99 in August 2022. The month with the most items sold (13) was December 2009 with an average selling price of $49.00 for an autographed item of Casey Kelly. Sold items reached their highest average selling price in January 2013 with $137.50 and the month that saw the lowest prices with $0.99 was January 2016. In average, an autographed item from Casey Kelly is worth $9.99.

Most recently, these items with a signature of Casey Kelly were sold on eBay - click here for more items.

A 'very favorable' BP for Casey Kelly (03/15/15): Padres right-hander throws all his pitches in 10-minute session.

Casey Kelly wins in MLB debut (08/2012): SAN DIEGO — It was a frustrating night for the Atlanta Braves, the NL wild-card leaders who mustered only four hits against the San Diego Padres. Three of them came off Casey Kelly, who was making his major league debut. "We actually hit a lot of balls hard, but they ...