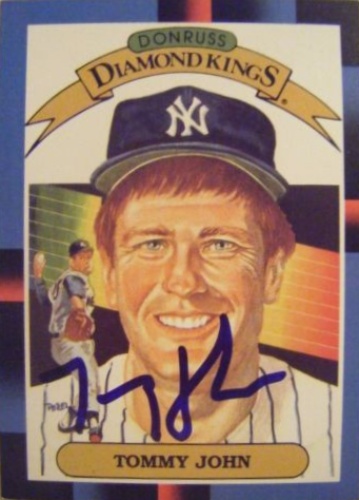 Thomas Edward John Jr. (born May 22, 1943), nicknamed "The Bionic Man," is an American retired professional baseball pitcher who played in Major League Baseball (MLB) for 26 seasons between 1963 and 1989. He played for the Cleveland Indians, Chicago White Sox, Los Angeles Dodgers, New York Yankees, California Angels, and Oakland Athletics. He was a four-time MLB All-Star and has the third-most wins (288) of any pitcher since 1900 not in the Hall of Fame. Known for his longevity, John was the Opening Day starter six times – three for the White Sox (1966, 1970, and 1971) and three times for the Yankees (1981, 1982, and 1989). More about Tommy John

Current items with a signature of Tommy John

These are the most current items with a signature of Tommy John that were listed on eBay and on other online stores - click here for more items.

Traded items with a signature of Tommy John

If you're interested in Tommy John Rookie cards you might want to take a look at our sister site that specializes in Baseball Rookie Cards only.

Most recently, these items with a signature of Tommy John were sold on eBay - click here for more items.

Scott Effross off Yankees' playoff roster, needs Tommy John surgery, per report (10/11/22): Effross was a major contributor in the bullpen after being picked up at the trade deadline

Rays' Andrew Kittredge to undergo Tommy John surgery as Tampa Bay loses closer f (06/10/22): Kittredge is one of several notable Rays pitchers who are on the shelf

Yankees' right-hander Luis Gil to undergo Tommy John surgery (05/2022): Gil will miss the remainder of the 2022 season and then some

Mississippi State's Landon Sims, possibly top college arm in MLB draft, out for (03/2022): Sims will undergo Tommy John surgery and miss the rest of the season

Nats' Ross out for season; no surgery right now (08/2021): Joe Ross will rest his partially torn ulnar collateral ligament rather than undergo Tommy John surgery at this time but will miss the rest of the season.

Phillies' Rhys Hoskins medically cleared and expects to be ready for Opening Day (02/2021): Hoskins had Tommy John surgery last October, but should be in Philadelphia's lineup on April 1

Sources: Red Sox to be cautious with Sale rehab (01/2021): The Red Sox intend to take it slow with Chris Sale while he rehabs from Tommy John surgery, sources tell ESPN's Buster Olney.

Sources: Kahnle, Dodgers reach 2-year deal (12/2020): Tommy Kahnle, who had Tommy John surgery on Aug. 4 and is likely to return in late 2021 or at the start of the 2022 season, has reached a two-year deal with the Dodgers, sources confirmed to ESPN.

Padres' Mike Clevinger needs Tommy John surgery and will miss entire 2021 MLB se (11/2020): Clevinger also signed a two-year deal with San Diego and will return to the Padres in 2022

Yankees reliever Kahnle chooses free agency (10/2020): The New York Yankees said Saturday that reliever Tommy Kahnle, who is recovering from Tommy John surgery, has refused an outright assignment to the minor leagues and elected to become a free agent.

Cardinals' Dakota Hudson to have Tommy John surgery, likely to miss entire 2021 (09/2020): Hudson went down with an elbow problem earlier this month

First-place Rays lose another key pitcher as Yonny Chirinos needs Tommy John sur (08/2020): Chirinos is the seventh Rays pitcher to land on the injured list; he's out for the season

Angels' Shohei Ohtani fails to record an out in first pitching appearance since (07/2020): The Angels' two-way star had a disastrous return to the mound

Yankees' Aaron Hicks says he'll be ready to play if 2020 MLB season starts in Ju (06/2020): Hicks is coming back from Tommy John surgery

Angels' Shohei Ohtani cleared to throw off mound, closing in on end of Tommy Joh (11/2019): Ohtani should be good to go from multiple injuries come spring training

Is baseball battling a Tommy John epidemic? (03/2015): As MLB elbow surgeries continue, experts hone in on a culture that may be pushing young pitchers too much, too soon.

Tommy John surgery didn't foil Smoltz's Hall bid (01/2015): John Smoltz wasn't just the rare pitcher who excelled as a starter and closer, he's also the first pitcher to be elected to the Hall of Fame after undergoing Tommy John Surgery.

Kris Medlen signs with Royals to begin second Tommy John comeback (12/2014): Kris Medlen has signed with the Royals, beginning his comeback from Tommy John surgery for the second time.

Football: Why DT Cousin is delaying Tommy John surgery to finish out the season (11/2014): Devlyn Cousin was going to make the most of this opportunity.

12 obscure facts about Tommy John surgery (06/2014): Tommy John made his living on the mound for the Dodgers (and then the Yankees), but made his biggest mark for returning to pitch after a revolutionary surgery in 1976 which now bears his name.

Fighting back vs. Tommy John surgery (05/2014): If Stephen Strasburg served as a warning shot and Matt Harvey a wake-up call, consider Jose Fernandez a body blow to the game of baseball.

Players who underwent Tommy John surgery in 2014 (04/2014): Share This Story! Posted! A link has been posted to your Facebook feed." Sent!

Turpin tumbler returns after Tommy John surgery (01/2014): Understandable, perhaps, for a girl in competitive gymnastics not to know anything about a former Major League pitcher who hasn't played since 1989.

Baseball star Tommy John to speak Feb. 8 - TehachapiNews.com (12/2013): It was announced last week that Tommy John will be the featured speaker at CSUB Baseball's "Hot Stove Dinner" set for Feb. 8 at the Kern County Fairgrounds.

Matt Harvey: I’m ‘Ahead Of Schedule’ In Tommy John Rehab (10/2013): But that doesn't mean he'll be taking the mound at any point in 2014. The Mets "are not prepared to let Harvey pitch next season," the Daily News reported.

Volcanoes Announce Promotion in Conjunction with Appearance by Tommy John (07/2013): KEIZER, OR - The Salem-Keizer Volcanoes extend an opportunity to all fans for a chance to win a Volcanoes game-used jersey and four box seat tickets by joining the Volcanoes social media conversation.

Phillies Minor League Report: Reading's Tyson Gillies homers twice, Lakewood's Y (06/2013): Loading... Zambrano pitched the first two innings for the IronPigs during the first game, but left the game with right shoulder tightness. The tightness in his shoulder may have contributed to him giving up four earned runs on three hits in his short time on the mound.

Pirates’ Morton Reflects On Tommy John Recovery Process (02/2013): Charlie Morton underwent Tommy John surgery in June and has been working hard to regain his form during his recovery process.

Comtpon to have Tommy John surgery (01/2013): Branson grad Mike Compton has seen his sophomore season at Florida State end before it could begin. The right-handed pitcher will undergo Tommy John surgery to repair damaged ulnar collateral ligament in his right elbow.

Giants' Brian Wilson 'way ahead' in Tommy John rehab (09/2012): San Francisco Giants right-hander Brian Wilson is scheduled to throw Oct. 19 for the first time since Tommy John surgery, and the always-confident closer insists he will be full strength by next year.

Andover's Carlson fighting back from Tommy John surgery at junior college powerh (06/2012): ANDOVER — There were more than a few dark moments when Shawn Carlson felt he would never return to the pitcher's mound. "I thought my career was over," said Carlson. "I thought I would never pitch again. I thought I would be drafted, then it was taken away. I was afraid."

Vance Worley Won't Need Tommy John Surgery (05/2012): Vance Worley met with Dr. James Andrews and got some good news: he won't need Tommy John surgery, which means he can keep playing this season, even though he has a bone chip in his elbow. Photo Credit: Getty Images

Baker preps for long recovery from Tommy John (04/2012): Minnesota Twins right-hander Scott Baker has started the long rehab process after Tommy John surgery, and he says he hopes to finally put behind him the elbow problems that have bothered him for years.

Piedra Vista ace Jacy Cave to miss season after Tommy John surgery (01/2012): The two-time defending 4A baseball state champion Piedra Vista Panthers will have to make a run at a three-peat without their ace pitcher in 2012.

Myers returns after Tommy John Surgery (12/2011): For some kids, sports are more than just something to do or pass the time. They’re a passion. That’s exactly what baseball is to Monmouth College fifth-year senior Zach Myers. Last year, Myers was struck with an arm injury and had to undergo season ending Tommy John surgery.

Tommy John surgery set for pitcher John Lackey: What is it? (10/2011): Right-hander, who was awarded five-year, $82.5 million contract with the Sox in 2010, opted for procedure following down year

BRODEUR: Bethel's Slavick fights back from Tommy John surgery (06/2011): BETHEL -- Tyler Slavick had exhibited early genius on a pitcher's mound, a third no-hitter to his name before a learner's permit. As a lefthander polished beyond his years, his mailbox was sure to be crammed with letters from colleges craving his rare services in a not too distant future.

The misperceptions of Tommy John surgery (03/2011): Opening day in Major League Baseball is Thursday. It is a time of hope, as fans in all major league cities dream of pennants and World Series titles. Unfortunately, for the second straight year a perennial playoff hopeful saw its playoff hopes jeopardized before the season ever started.

A's Outman shares Tommy John surgery advice for Wainwright (02/2011): PHOENIX—Twenty months after having Tommy John surgery, Oakland A's lefthander Josh Outman is back. Well, almost. "Once I make the team, I can say I'm back," Outman said Friday morning. "Everything is feeling good so far.