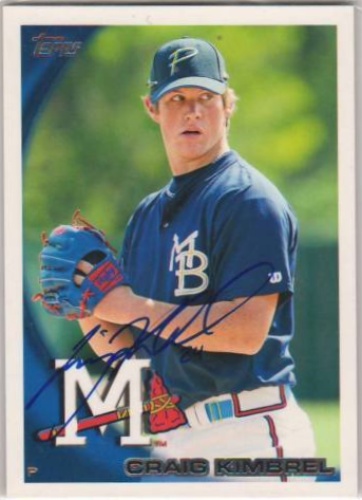 Craig Michael Kimbrel (born May 28, 1988) is an American professional baseball pitcher for the Los Angeles Dodgers of Major League Baseball (MLB). He previously played for the San Diego Padres, Boston Red Sox, Atlanta Braves, Chicago Cubs, and Chicago White Sox. He is an eight-time All-Star, two-time Reliever of the Year, and a 2018 World Series champion. He is known for his triple-digit fastball, as well as his unique pre-pitch stare. Listed at 6 feet 0 inches (1.83 m) and 210 pounds (95 kg), he both throws and bats right-handed. More about Craig Kimbrel

Current items with a signature of Craig Kimbrel

These are the most current items with a signature of Craig Kimbrel that were listed on eBay and on other online stores - click here for more items.

Traded items with a signature of Craig Kimbrel

If you're interested in Craig Kimbrel Rookie cards you might want to take a look at our sister site that specializes in Baseball Rookie Cards only.

The most expensive item with a signature of Craig Kimbrel (Craig Kimbrel Autographed/Signed Atlanta Braves Blue Majestic MLB Jersey LE 1/46) was sold in September 2016 for $549.99 while the cheapest item (Craig Kimbrel Hand Signed 8X10 Photo Atlanta Braves) found a new owner for $0.99 in November 2021. The month with the most items sold (21) was December 2020 with an average selling price of $8.50 for an autographed item of Craig Kimbrel. Sold items reached their highest average selling price in September 2015 with $199.99 and the month that saw the lowest prices with $0.99 was October 2015. In average, an autographed item from Craig Kimbrel is worth $29.97.

Most recently, these items with a signature of Craig Kimbrel were sold on eBay - click here for more items.

Dodgers pull struggling Kimbrel from closer role (09/24/22): Craig Kimbrel is out as closer for the Los Angeles Dodgers, who will go with a committee approach in the final two weeks of the regular season, manager Dave Roberts said.

Batting Around: Should Dodgers stick with Craig Kimbrel or give closer's role to (08/18/22): Kimbrel has had a tough 2022 season; will Dave Roberts make a switch before the playoffs?

Five ways the Craig Kimbrel trade bolsters Dodgers' pitching, balances the roste (04/01/22): Trading AJ Pollock comes with risks, but adding a proven closer such as Craig Kimbrel was too valuable an opportunity for the Dodgers to pass up.

Kid who imitated White Sox’ Craig Kimbrel a star on his own merits (01/2022): Chase Boykin is good at imitating Craig Kimbrel, but the 10-year-old is even better at playing shortstop for the West Englewood Tigers.

Cubs' Kimbrel gets 5 outs to notch 350th save (04/2021): Cubs closer Craig Kimbrel recorded the first ever five-out save Thursday to reach 350 for his career.

Why these three MLB All-Star closers are struggling in 2020; and who is in line (08/2020): Brad Hand, Edwin Diaz and Craig Kimbrel have each already experienced turbulence this season

Cubs barely survive a bullpen meltdown, but they have a Craig Kimbrel problem (07/2020): The Cubs prevailed over the Reds on Monday night, but their closer struggled mightily

Craig Kimbrel made up some clever t-shirts for the new-look Braves (03/2015): After trading the likes of Justin Upton, Jason Heyward, and Evan Gattis as well as adding a handful of veteran free agents, the Braves have a ton of new faces in camp this spring.

Braves' Craig Kimbrel continues to rack up saves at record-setting pace (06/2014): On Friday night, Craig Kimbrel made history for the Atlanta Braves by collecting the 155th save of his major league career, breaking the franchise record of 154 set by John Smoltz.

Craig Kimbrel struggles in return from right shoulder issue, apologizes for reac (04/2014): Craig Kimbrel was called on Saturday for the first time since complaining of discomfort in his shoulder last Monday. The appearance did not go smoothly.

Arbitration round-up: Craig Kimbrel, Doug Fister, Homer Bailey among those farth (01/2014): In the event that a player and team go to an arbitration hearing, the arbiter must choose which salary the player will receive. They can't just find a suitable midpoint between the team's submission and the player's.

Braves Closer Craig Kimbrel Considering a Career Change (11/2013): May be a good move.

Braves, Huntsville native Craig Kimbrel picks up award (09/2013): Atlanta Braves closer Craig Kimbrel, who led the Majors with 12 saves during August, has been selected as the winner of the Major League Baseball Delivery Man of the Month Award for August.

Fernando Rodney, Craig Kimbrel and the Fickle Nature of Baseball Closers (05/2013): Closing in the bigs ... fun job, if you can stay consistent.

Craig Kimbrel gives up ninth-inning homer as Braves fall to Diamondbacks (06/2012): ATLANTA - In what's been a season of precipitous highs and lows for the Braves, Craig Kimbrel has been their one...