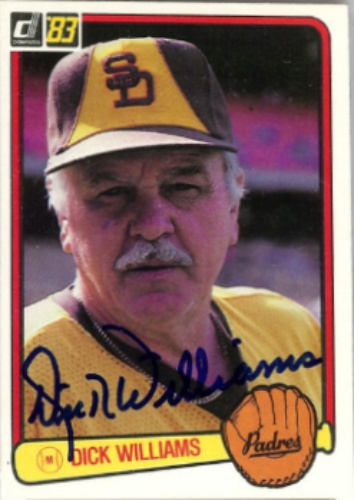 Richard Hirschfeld Williams (May 7, 1929 – July 7, 2011) was an American left fielder, third baseman, manager, coach and front-office consultant in Major League Baseball. Known especially as a hard-driving, sharp-tongued manager from 1967 to 1969 and from 1971 to 1988, he led teams to three American League pennants, one National League pennant, and two World Series triumphs. He is one of nine managers to win pennants in both major leagues, and joined Bill McKechnie in becoming only the second manager to lead three franchises to the Series. He and Lou Piniella are the only managers in history to lead four teams to seasons of 90 or more wins. Williams was inducted into the National Baseball Hall of Fame in 2008 following his election by the Veterans Committee. More about Dick Williams

Current items with a signature of Dick Williams

These are the most current items with a signature of Dick Williams that were listed on eBay and on other online stores - click here for more items.

Traded items with a signature of Dick Williams

The most expensive item with a signature of Dick Williams (1952 Topps #396 Dick Williams Signed AUTO RC Rookie HOF PSA/DNA Authentic HIGH#) was sold in January 2021 for $816.66 while the cheapest item (Dick Williams 84 World Series Signed Gateway Cachet) found a new owner for $0.01 in November 2010. The month with the most items sold (62) was July 2011 with an average selling price of $29.27 for an autographed item of Dick Williams. Sold items reached their highest average selling price in September 2013 with $56.50 and the month that saw the lowest prices with $3.50 was July 2020. In average, an autographed item from Dick Williams is worth $15.07.

Most recently, these items with a signature of Dick Williams were sold on eBay - click here for more items.

Reds' Williams resigns as head of baseball ops (10/07/20): Dick Williams has resigned as the Reds' president of baseball operations after nearly 15 years with the team, citing spending time with his family as one of the primary reasons for the move.

Reds president of baseball operations Dick Williams steps down to pursue persona (10/07/20): Williams had been with the team since 2006

Dick Williams Dishes Out Changes in the D-Hall (09/11/14): Dick Williams, Director of Dining Services, has greatly helped to direct the changes made to the Grinnell Dining Hall over the summer. The S&B’s Thanh Mai […]

Dick Williams Relays: Mallard Creek’s Quashawn Cunningham sprints away from comp (04/2014): The only thing in front of Quashawn Cunningham at the Dick Williams Relays was his personal goal. The Mallard Creek High senior blazed to wins Friday in the 100 and 200 meters and the Mavericks’ 4x100 relay at East Mecklenburg to establish his credentials as one of N.C.’s best sprinters.

Valentine another Dick Williams? Red Sox will find out soon enough (12/2011): I'll be perfectly honest with you. I can't say with very much certainty that the Red Sox made the right choice by hiring Bobby Valentine to manage the club.

Remembering Dick Williams, a ‘man of substance’ (07/2011): In his 13 years as a major league player, Dick Williams was a bench jockey nonpareil. That is to say he “had a mouth on him.” It wasn’t until he became a manager who won pennants with three different clubs that it became clear that the mouth was attached to a superior brain.