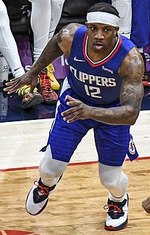 Eric Bledsoe (born December 9, 1989) is an American professional basketball player for the Portland Trail Blazers of the National Basketball Association (NBA). He plays the point guard position. After a season of college basketball with the Kentucky Wildcats, he was selected by the Oklahoma City Thunder with the 18th overall pick in the 2010 NBA draft and subsequently traded to the Los Angeles Clippers. Bledsoe had a four-year tenure with the Phoenix Suns between 2013 and 2017, before being traded to the Milwaukee Bucks. More about Eric Bledsoe

Current items with a signature of Eric Bledsoe

These are the most current items with a signature of Eric Bledsoe that were listed on eBay and on other online stores - click here for more items.

Traded items with a signature of Eric Bledsoe

If you're interested in Eric Bledsoe Rookie cards you might want to take a look at our sister site that specializes in Baseball Rookie Cards only.

The most expensive item with a signature of Eric Bledsoe (Game Worn Used Signed Eric Bledsoe Shoe Sneaker PE) was sold in February 2020 for $299.99 while the cheapest item (2020-21 Select Basketball Eric Bledsoe Silver Auto Signature Series /249) found a new owner for $0.01 in December 2021. The month with the most items sold (21) was March 2010 with an average selling price of $15.75 for an autographed item of Eric Bledsoe. Sold items reached their highest average selling price in December 2012 with $224.99 and the month that saw the lowest prices with $1.25 was August 2021. In average, an autographed item from Eric Bledsoe is worth $14.99.

Most recently, these items with a signature of Eric Bledsoe were sold on eBay - click here for more items.

Eric Bledsoe Absorbs Contact, Makes 360 Pass Cross-Court to P.J. Tucker (12/2014): Phoenix Suns point guard Eric Bledsoe 's court vision and incredible athleticism were on display against the Oklahoma City Thunder.  As he drove to the basket in the third quarter, Bledsoe absorbed contact and still managed to kick it out to P.J. Tucker, who splashed in the three. [ NBA ]

Eric Bledsoe on flagrant foul he took from Nerlens Noel: ‘They did it on purpose (11/2014): Bledsoe says the Sixers warned him before the game that he would be targeted for his previous comments.

Here’s where Eric Bledsoe should go next season as a restricted NBA free agent (08/2014): Houston, Milwaukee and Sacramento are all in the mix

Eric Bledsoe and the frustrations of NBA restricted free agency (07/2014): Bledsoe is holding out for a maximum five-year, $80 million deal, while the Suns are offering four-years, $48 million.

Suns extend qualifying offers to Eric Bledsoe and P.J. Tucker to make them restr (06/2014): Suns retain the right to match offers Bledsoe and Tucker may receive in free agency.

Lakers might chase Eric Bledsoe, per report (01/2014): Before getting all carried away with the "L.A. always gets the top free agents!" stuff, let's look at this situation. Bledsoe 24 years old and, before knee surgery, he averaged 18 points, 5.8 assists and 4.2 rebounds in his first season as a starter.

2013 NBA schedule: Eric Bledsoe returns to LA to face Clippers for first time (12/2013): On the season, Bledsoe is averaging 18.4 points, 5.9 assists and 4.3 rebounds while shooting a solid 49.2 percent from the field. The youngster is also shooting a respectable 35.4 percent from long range despite shooting a much higher volume than he has at any point in his career.

Eric Bledsoe injury: Suns guard might return Wednesday (11/2013): Bledsoe has missed Phoenix's last four games. When he tried to go through warmups on Sunday in Orlando, he quickly realized he was not ready to return, via Paul Coro of the Arizona Republic :

Donald Sterling nearly sabotaged Clippers trade of Eric Bledsoe (10/2013): Sterling's stance left the team's head coach in a difficult position. From Wojnarowski: With Sterling, rational thought and debate aren't always part of the discussion. Whatever his reasons, everyone else awaited Rivers' conversations with Sterling.

Taking stock of the game and course of Eric Bledsoe (09/2013): This will be a season of dramatic change for Eric Bledsoe, who for the first time in his NBA career will be looked upon as a crucial component of his team’s construction.

NBA trade rumors: Raptors targeting Eric Bledsoe, per report (06/2013): The Toronto Raptors have discussed a trade involving point guard Eric Bledsoe with the Los Angeles Clippers recently, according to ESPN's Marc Stein . Talks are only at the "exploratory stage" at this point, but the Raptors' interest in L.A.'s prized young point guard is said to be "significant."

Eric Bledsoe destroys Tony Allen's layup attempt (04/2013): Better luck next time, Tony Allen . Eric Bledsoe would like you to kindly get that weak stuff out of his house.

Clippers' Eric Bledsoe wants to play Saturday (03/2013): Guard's calf feels better, but he will be a game-time decision. There was excitement in Eric Bledsoe 's voice.