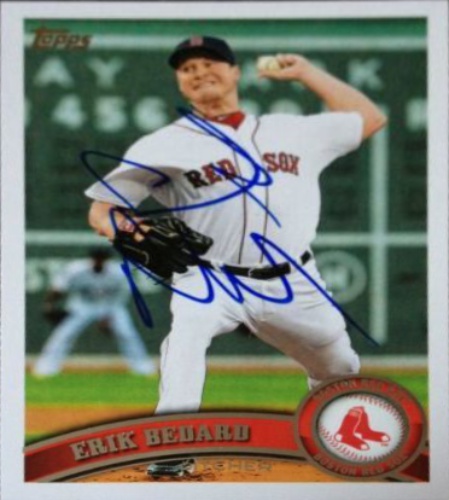 Current items with a signature of Erik Bedard

These are the most current items with a signature of Erik Bedard that were listed on eBay and on other online stores - click here for more items.

Traded items with a signature of Erik Bedard

The most expensive item with a signature of Erik Bedard (SEATTLE MARINERS ERIK BEDARD SIGNED AUTHENTIC JERSEY) was sold in May 2015 for $139.99 while the cheapest item (Erik Bedard Mariners Autographed Baseball Photo Card) found a new owner for $0.29 in January 2010. The month with the most items sold (7) was April 2008 with an average selling price of $5.50 for an autographed item of Erik Bedard. Sold items reached their highest average selling price in May 2015 with $139.99 and the month that saw the lowest prices with $0.73 was November 2016. In average, an autographed item from Erik Bedard is worth $4.95.

Most recently, these items with a signature of Erik Bedard were sold on eBay - click here for more items.

Erik Bedard out 4-6 weeks with back injury (03/23/15): He was making his way back from shoulder surgery before this latest injury.

Erik Bedard pitches two scoreless innings (03/09/15): AT THE PLATE: Jimmy Rollins was two for three with a double, a triple and a run. Top prospect Corey Seager had a pinch-hit double in the eighth inning that raised his spring average to .375. Howie Kendrick and Andre Ethier each drove in a run. Seager scored on a single by Scott Van Slyke to tie...

Rays activate Joel Peralta, designate Erik Bedard for assignment (07/2014): Bedard was demoted from the rotation to the bullpen three weeks ago, but has barely pitched since then and at age 35 could be nearing the end of the line.

John Lackey trumps Erik Bedard in throwback pitcher's duel as Red Sox top Rays, (04/2014): Congratulations! Your weather is set to . You can change the location at any time. Don't have an account?

Canada's Erik Bedard not interested in relief role with Rays (03/2014): Canadian pitcher Erik Bedard, who signed a minor league contract with the Tampa Bay Rays in February, has told the Tampa Tribune he would exercise his opt-out clause and try to latch on with another club if he's not named a starter.

Canadian Erik Bedard, Astros look to hand Blue Jays 8th straight loss (07/2013): Houston Astros lefty Erik Bedard likely is hoping a return to his native Canada will also be the end of his four-start losing streak, while the Blue Jays are eager to snap a seven-game losing skid of their own.

Astros send Phil Humber to bullpen, Erik Bedard back to rotation (05/2013): HOUSTON -- The Houston Astros have moved struggling starter Philip Humber out of the rotation and into the bullpen.

Erik Bedard , Brad Peacock win final rotation spots for Astros (03/2013): KISSIMMEE, Fla. (AP) Brad Peacock and Erik Bedard have made the Houston Astros' rotation and will pitch the fourth and fifth games of the regular season.

Pitcher Erik Bedard gets one more shot (02/2013): The smalltown boy, the kid from Navan who beat the odds to make it to Major League Baseball, is once again looking to prove the doubters wrong.

Pirates part ways with veteran left-hander Erik Bedard (08/2012): Opening-day starter had a major league high 14 losses and his struggles put a strain on the bullpen.

Cubs hitters tee off on Canadian pitcher Erik Bedard (07/2012): Pittsburgh Pirates left-hander Erik Bedard of Navan, Ont., matched a career-worst by giving up nine runs — eight earned — over 4 1/3 innings in a 14-4 loss to the Chicago Cubs.