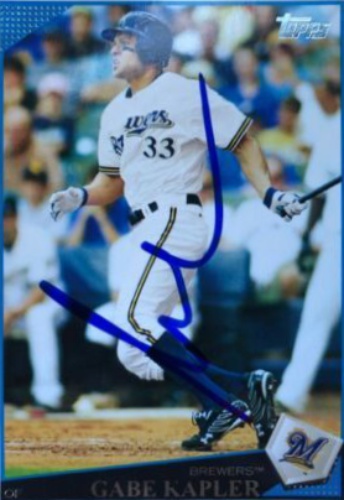 Current items with a signature of Gabe Kapler

These are the most current items with a signature of Gabe Kapler that were listed on eBay and on other online stores - click here for more items.

Traded items with a signature of Gabe Kapler

The most expensive item with a signature of Gabe Kapler (Gabe Kapler Alyssa Nakken Signed Major League Baseball PSA DNA Coa Giants) was sold in May 2022 for $159.00 while the cheapest item (Gabe Kapler Autographed Auto Team Postcard Texas Rangers!) found a new owner for $0.01 in December 2017. The month with the most items sold (15) was June 2008 with an average selling price of $5.02 for an autographed item of Gabe Kapler. Sold items reached their highest average selling price in September 2012 with $65.00 and the month that saw the lowest prices with $0.99 was May 2015. In average, an autographed item from Gabe Kapler is worth $7.00.

Most recently, these items with a signature of Gabe Kapler were sold on eBay - click here for more items.

Kapler resumes protest; Zaidi expresses support (06/01/22): After standing for the national anthem Monday in honor of the Memorial Day holiday, Giants manager Gabe Kapler remained in the clubhouse Tuesday to protest the direction of the nation after the school shootings that killed 21 in Uvalde, Texas, last week.

Kapler may suspend protest for Memorial Day (05/29/22): Giants manager Gabe Kapler says he may stay on the field during the national anthem for San Francisco's game on Memorial Day, It's a day that "deserves special attention," he said.

Giants' Gabe Kapler skipping national anthem 'until I feel better about the dire (05/28/22): Kapler said he's not going to come out for the anthem 'going forward' amid the recent gun violence

Kapler to not take field during anthem in protest (05/27/22): Giants manager Gabe Kapler wrote that he is "not okay with the state of this country" after the school shooting in Texas and that he "felt like a coward" for not protesting "the lack of delivery on the promise of what our national anthem represents."

Giants manager Gabe Kapler won't come out of clubhouse for national anthem (05/27/22): Kapler said he's not going to come out for the anthem until he feels better about 'the direction of our country'

Being Gabe Kapler: Inside the mind of the San Francisco Giants' nonconformist ma (05/2022): The Giants skipper doesn't fit the mold of a traditional manager, with a style and patience informed by his music-loving, free-thinking father. It has helped the team keep perspective through hot starts and hitting walls.

Giants manager Gabe Kapler perfectly outlined how irrelevant 'unwritten rules' a (04/2022): Can we all please stop getting angry when opponents try?

Giants' Logan Webb to make first Opening Day start after breakout year (03/2022): Logan Webb is the youngest pitcher in the Giants rotation but he'll be the one leading them into the season. Gabe Kapler named him the opening day starter on Monday.

How Giants can bolster lineup with MLB adding universal DH (02/2022): The Giants had a universal DH in 2020 and it showed how Gabe Kapler might handle the extra lineup spot. They'll have plenty of options whenever the 2022 season starts.

Posey (thumb) exits Giants' win; X-rays negative (07/2021): The X-rays on Posey's left thumb were negative. Manager Gabe Kapler said the catcher could be available off the bench vs. the Cardinals on Monday.

Kapler: Pitches near Trout's head not malicious (08/2020): The Giants and Angels both downplayed the two ninth-inning pitches that were thrown near Mike Trout's head, with manager Gabe Kapler calling pitcher Shaun Anderson "jumpy."

Giants' Kapler kneels with players during anthem (07/2020): Giants manager Gabe Kapler joined several of his players in dropping to a knee during the national anthem before Monday night's exhibition game against the host Athletics.

Giants manager Gabe Kapler says it will be 'tremendous challenge' to stop spitti (05/2020): Spitting and other baseball habits will be prohibited when baseball returns

Giants make Nakken 1st female coach in MLB (01/2020): The Giants made Alyssa Nakken the first female coach on an MLB staff Thursday. She will be in uniform, will travel, throw batting practice and hit fungoes, manager Gabe Kapler said.

Giants' Gabe Kapler hasn't spoken with free agent Madison Bumgarner (11/2019): Will the Giants end up bringing him back?

Bryce Harper bats against four-man outfield; Gabe Kapler says to ignore that shi (03/2019): The Phillies' $330 million outfielder faces an odd defensive alignment in his exhibition debut. His new manager doesn't want the slugger to change his game if he sees it again.

Gabe Kapler: ‘There Is Nowhere On Earth Like Boston For A Player’ (04/2014): Gabe Kapler was one of nine players on the field when the Boston Red Sox...

Gabe Kapler's top 10 culinary experiences along the MLB trail (02/2014): Gabe Kapler loves food. And he had a chance to experience many culinary delights during his MLB career. Here's a look at his top 10 places to dine on the road.

Jay and Dan's Podcast: Episode 18 with Gabe Kapler and Mark McMorris (12/2013): Make some time for a marathon pod...and for good reason. Jay and Dan talk baseball with Gabe Kapler. Then snowboarding with Mark McMorris. And we are introduced to a new game, "I Stopped Listening to Music in High School" with contestant Dan O'Toole. Cheers!

Gabe Kapler Leads Israel in Baseball Classic (09/2012): Team Israel has announced its 28-man roster for the World Baseball Classic Qualifier, which begins this week. Click here for the rest of the article...