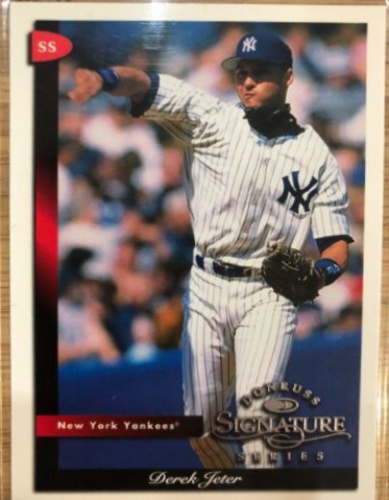 Derek Sanderson Jeter (/ˈdʒiːtər/ JEE-tər; born June 26, 1974) is an American former professional baseball shortstop, businessman, and baseball executive. As a player, Jeter spent his entire 20-year Major League Baseball (MLB) career with the New York Yankees. He was elected to the Baseball Hall of Fame in his first year of eligibility in 2020; he received 396 of 397 possible votes (99.75%), the second-highest percentage in MLB history (behind only teammate Mariano Rivera) and the highest by a position player. He was the chief executive officer (CEO) and part owner of the league's Miami Marlins from September 2017 to February 2022. More about Derek Jeter

Current items with a signature of Derek Jeter

These are the most current items with a signature of Derek Jeter that were listed on eBay and on other online stores - click here for more items.

Traded items with a signature of Derek Jeter

If you're interested in Derek Jeter Rookie cards you might want to take a look at our sister site that specializes in Baseball Rookie Cards only.

The most expensive item with a signature of Derek Jeter (DEREK Jeter signed autographed 1995 Columbus Clippers Program Card uncut sheet) was sold in May 2021 for $49222.00 while the cheapest item (Derek Jeter Fleer 2001 MLB All-Star game 2001 Ritz/Oreo Baseball Signature Card) found a new owner for $0.01 in November 2022. The month with the most items sold (168) was January 2022 with an average selling price of $204.50 for an autographed item of Derek Jeter. Sold items reached their highest average selling price in August 2018 with $1397.50 and the month that saw the lowest prices with $49.00 was August 2009. In average, an autographed item from Derek Jeter is worth $199.99.

Most recently, these items with a signature of Derek Jeter were sold on eBay - click here for more items.

Yankees honor Jeter on Hall of Fame induction (09/10/22): Derek Jeter returned to Yankee Stadium for the first time in five years and was honored for his induction to the Hall of Fame two years ago.

Charming, engaging, intense: 'The Captain' director Randy Wilkins on working wit (07/28/22): ESPN speaks to the filmmaker tasked with telling the story of an MLB icon.

‘We can compete:’ Marlins, without Jeter, open spring camp (03/2022): The Marlins opened camp - their first in five years without Derek Jeter as part of the team's leadership group - on Monday with some traditional signs of spring-training optimism.

Derek Jeter steps down as Marlins CEO citing 'the vision for the future of the f (02/2022): The Hall of Famer had been the club's CEO since 2017

Jeter: Will be 'active' to make Marlins a winner (10/2021): The Marlins aren't winning at anywhere near the rate Derek Jeter wants, and he says he will be busy this offseason trying to help the team get better through free agency or trades.

Derek Jeter documentary series set for 2022 release as Yankees legend gets 'Last (05/2021): 'The Captain' will be a six-part series with Randy Wilkins directing and Spike Lee as executive producer

Baseball Hall's July inductions to move indoors (02/2021): Baseball's Hall of Fame has canceled its traditional outdoor induction ceremony for the second straight summer because of the pandemic and plans an indoor, televised event for Derek Jeter and others being honored.

Jeter calls Marlins' playoff berth a 'steppingstone' (09/2020): Marlins CEO Derek Jeter said Monday: "We didn't come here to chase 'a' championship or 'a' playoff appearance. We want to be sustainable."

Baseball Hall of Fame opens Inductees Exhibit (08/2020): The Baseball Hall of Fame's class of 2020 has to wait a year to get inducted because of the coronavirus pandemic, but the careers of Derek Jeter, Ted Simmons, Larry Walker and Marvin Miller are already being celebrated at the shrine.

Marlins' Derek Jeter announces move to daily testing schedule after COVID-19 out (07/2020): As many as 17 Marlins personnel have tested positive for coronavirus in recent days

Derek Jeter says he would've moved out of Manhattan if Yankees lost 2000 Subway (06/2020): Jeter would've felt so bad after losing the battle of New York he would have moved

Here are Derek Jeter's most memorable moments in his Hall of Fame career for Yan (05/2020): From the Jeffrey Maier incident to the flip play, we look back at the best of the Yankees' Hall of Fame captain

Marlins shut down outfield pool, nightclub at stadium ahead of 2020 season (03/2020): Another staple in Miami's ballpark lost under Derek Jeter's leadership

Derek Jeter breaks down 'The Flip' play from 2001 ALDS against Athletics for fir (01/2020): Jeter goes into detail of one of the most incredible defensive plays in the history of the sport

Twitter Mailbag: Sign-stealing, Derek Jeter, and Charles Foster Kane (11/2019): And is Derek Jeter the only guy who will get elected to the Hall of Fame this time around?

Nick Mitchell, Oregon State Beavers quarterback, admires Derek Jeter, loves to f (04/2015): Congratulations! Your weather is set to . You can change the location at any time. Don't have an account?

Derek Jeter pitches pear salad for Tampa airport ‘sports lounge’ (03/2015): Derek Jeter is looking to add professional restaurateur to his résumé after retiring from baseball. The former Yankee has signed on with Concessions Tampa to open a sports-themed restaurant at...

Dispatch from Sloan: Talking Tim Tebow, Derek Jeter, and the Truth and Joy Found (02/2015): Let me see, I think is the fourth year I've attended the MIT Sloan Sports Analytics Conference. Or it might be the fifth. I've never been a math master, which is just the kind of self-aware confession that annually...

Julius Thomas tells why "it's not so easy" in piece for Derek Jeter's site (10/2014): Julius Thomas runs in a touchdown against the Cowboys during a preseason game. (Seth McConnell, The Denver Post via Getty Images)Back up to Week 6, when the Broncos defeated the Jets in New

Yankees Derek Jeter to continue commitment to students (06/2014): When Yankee captain Derek Jeter hangs up his pinstripes at the end of his 20th season, his charity will continue to impact the lives of city high school students, his sister told the Daily News.

This Derek Jeter Scouting Report Says Everything and Nothing at the Same Time (05/2014): Knowledge is power.

Yankees' Derek Jeter rubs Robinson Cano's beard after giving him a hug (04/2014): The two former teammates met up before the Yankees and Mariners played in the Bronx on Tuesday.

Derek Jeter doesn't expect his final Opening Day to be any different (03/2014): Yankee captain is set to retire following the season

Justin Verlander’s salute to Derek Jeter (02/2014): The Tigers' ace sounds like he'll tune in for the Farewell Tour

Rounding Third: Michael Young: A poor man's Derek Jeter (01/2014): An early-morning fire has caused an apartment building to collapse in New Westminster, but according to radio reports no one has been injured.

Fine print may spoil 'Spend Game Day With Derek Jeter' auction promise (11/2013): Yankees' captain's contest not all it's cracked up to be

Derek Jeter Is The MVP Of His Generation. At Least. (09/2013): Like Babe Ruth, Joe DiMaggio and Mickey Mantle, the shortstop carried a generation for the Yankees and for baseball.

Derek Jeter takes his latest return to Yankees in stride (08/2013): Derek Jeter found it “hard to believe” that Monday marked the first time that he and Alex Rodriguez – as well as Curtis Granderson – were in the same lineup in 2013.

Derek Jeter unnerves Yankee fans with no fixed date for bouncing off the disable (03/2013): More stress for the Yankees who have been hit hard by the injury bug this offseason. Captain Derek Jeter is in the midst of a minor setback in recovery from his ankle injury as his return date remains unknown.

Derek Jeter gets back on diamond (01/2013): Derek Jeter worked out on a baseball field Monday in Tampa, Fla., for the first time since breaking his left ankle in October.

Derek Jeter Calls Grieving Mother Of Victoria Soto; MLB Observes Moment Of Silen (12/2012): “Vicki loved the Yankees — that was part of her eulogy,” Soto's cousin told the New York Daily News. “No one in the family reached out, so (Jeter) must have heard about it and ... reached out."

Photo: Derek Jeter makes the best face ever (09/2012): US Presswire caption, untouched: "New York Yankees designated hitter Derek Jeter watches a ball being tossed in the dug out during a game against the Toronto Blue Jays at the Rogers Centre." Perfect.

Derek Jeter Is Still Playing The Game The Right Way (08/2012): Once upon a time in baseball, it was easy to enjoy greatness.

Derek Jeter has found his swing and off to a hot start this season (04/2012): Struggling at the plate, he reverted to his old approach

Were the Critics of Derek Jeter’s Critics Right? (09/2011): Derek Jeter. "All of Derek Jeter's critics earlier in the season are hiding under a rock somewhere. A big rock. They've disappeared. You never hear from them. What's happened?"

Dissecting Derek Jeter's stunning revival (08/2011): Has it really been three months since baseball fans were treated to this:

Derek Jeter In Line To Return Monday (06/2011): Derek Jeter will begin a minor league rehab assignment on Saturday and is in line to return to the New York Yankees for Monday's series opener against the Cleveland Indians.

Derek Jeter hoping to have fun as 3,000-hit milestone approaches (05/2011): OAKLAND, Calif. -- Earlier in the year, Yankees captain Derek Jeter said he'd try to enjoy his climb toward 3,000 hits. With just 17 hits to go until reaching the milestone, Jeter hopes that he can still achieve that goal.

A New Book Paints An Unflattering Picture Of Derek Jeter (04/2011): A new biography of New York Yankee Derek Jeter paints a somewhat unflattering portrait of the one of the most beloved figures in baseball. Ian O'Connor's book titled "The Captain" will hit the shelves in May, but juicy bits from the books are already hitting the tabloids.

Cito Culver excited to take grounders with idol Derek Jeter (03/2011): Opening day for baseball season gets underway on Thursday. Spring training is winding down and it has been an exciting one for Irondequoit's Cito Culver with the New York Yankees...

Derek Jeter Gets Mad With Yankees Over Negotiations (12/2010): Derek Jeter has shown he can get angry over baseball. Rather than his usual vague media responses that hides what is really going on in the Yankee shortstop head, Jeter let it be know that the negotiations with Yankees over his free agent status, disturbed him.