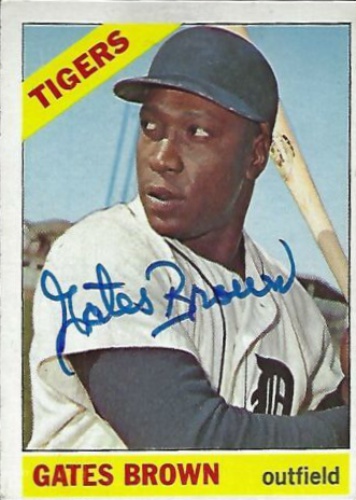 William James "Gates" Brown (May 2, 1939 – September 27, 2013) was an American Major League Baseball left fielder who spent his entire career with the Detroit Tigers (1963–1975). He batted left-handed and threw right-handed. More about Gates Brown

Current items with a signature of Gates Brown

These are the most current items with a signature of Gates Brown that were listed on eBay and on other online stores - click here for more items.

Traded items with a signature of Gates Brown

The most expensive item with a signature of Gates Brown (1968 Detroit Tigers Autographed 8x10 Norm Cash Eddie Matthews Gates Brown Comer) was sold in September 2013 for $154.99 while the cheapest item (Gates Brown auto signed 1968 Topps card Tigers #583) found a new owner for $0.50 in August 2010. The month with the most items sold (28) was September 2013 with an average selling price of $11.49 for an autographed item of Gates Brown. Sold items reached their highest average selling price in January 2018 with $75.00 and the month that saw the lowest prices with $0.99 was December 2009. In average, an autographed item from Gates Brown is worth $7.99.

Most recently, these items with a signature of Gates Brown were sold on eBay - click here for more items.

John Harbaugh remembers growing up around Gates Brown (03/25/14): Orlando — There is a lot of Detroit in Baltimore Ravens head coach John Harbaugh. He grew up in Ann Arbor, the son of former Michigan assistant Jack Harbaugh, watching and rooting for the Tigers.

Ashway: Gates Brown, pinch hitter of renown (10/08/13): Commenting not available. Login now | Register for an account disclaimer= http://www.gainesvilletimes.com/ encourages readers to interact with one another. We will not edit your comments, but we reserve the right to delete any inappropriate responses.

Gates Brown memorial service turns into a celebration of his life (10/07/13): For 13 major league seasons, all with the Detroit Tigers, William 'Gates' Brown popped off the bench as cold as his favorite beverage, with the game on the line in the late innings, and delivered.

Former Tiger Gates Brown's memorial service turns into a celebration of his life (10/06/13): For 13 major seasons, all with the Tigers, William (Gates) Brown popped off the bench as cold as his favorite beverage, with the game on the line in the late innings, and delivered.

Former Tiger Gates Brown remembered for having a special affinity with fans (10/2013): Fans, former teammates and family members gathered all afternoon to honor the people's Tiger. They came to mourn. They came to share stories and they came to praise a man who always put fans first whether he was in a Tigers uniform or in a wheelchair where he greeted fans at Comerica Park.

Former Tiger Gates Brown dies at age 74 (09/2013): Gates Brown, the best pinch-hitter in Detroit Tigers history and a member of the 1968 World Series champions, died Friday, the team said. He was 74.