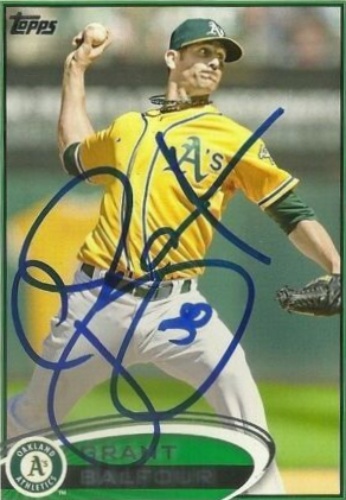 Grant Robert Balfour (born 30 December 1977) is an Australian former professional baseball relief pitcher. He played in Major League Baseball (MLB) for the Minnesota Twins, Milwaukee Brewers, Tampa Bay Devil Rays / Rays, and Oakland Athletics. He is the all-time save leader and strikeout leader among Australian MLB pitchers, and holds the Oakland Athletics consecutive save record at 44. More about Grant Balfour

Current items with a signature of Grant Balfour

These are the most current items with a signature of Grant Balfour that were listed on eBay and on other online stores - click here for more items.

Traded items with a signature of Grant Balfour

The most expensive item with a signature of Grant Balfour (Grant Balfour Game-Used & Signed Wilson A2000 GLOVE- Oakland A'S - MCM) was sold in February 2020 for $224.50 while the cheapest item (GRANT BALFOUR SIGNED TOTAL CARD 2008 POSTSEASON RAYS) found a new owner for $0.01 in October 2008. The month with the most items sold (26) was October 2008 with an average selling price of $10.24 for an autographed item of Grant Balfour. Sold items reached their highest average selling price in February 2020 with $224.50 and the month that saw the lowest prices with $0.55 was June 2019. In average, an autographed item from Grant Balfour is worth $8.00.

Most recently, these items with a signature of Grant Balfour were sold on eBay - click here for more items.

Rays' Grant Balfour returns after death of father (03/15/15): PORT CHARLOTTE — Grant Balfour sat in the hospital room all day and spent his nights sleeping there on a pullout bed for two weeks, leaving his dying father's side only to go work out and throw.

Rays honor the father of Grant Balfour (03/15/15): David Balfour was a longtime executive with the Sydney Blue Sox of the Australian Baseball League, and when Grant returned from the funeral Sunday there was a touching tribute waiting for him ...

Grant Balfour comes to Baltimore for first time since deal with Orioles fell thr (04/2014): The last time Grant Balfour was in Baltimore, he thought he had landed in the place where he'd spend the next two years of his career.

Major League Baseball: Why Grant Balfour of Tampa Bay Rays is jealous of you (03/2014): Grant Balfour has his own maniacal fan base, a $12 million contract which catapults him into BRW rich-list status and has just gone from relief pitcher to closer status after returning to Tampa Bay. And yet, Sydneysiders, he is jealous of you.

MLB roundup: Grant Balfour contract details, Rockies sign Paul Janish (01/2014): In the first year of his 2-year, $12 million deal, Balfour will get a $1 million signing bonus and earn just $4 million for the 2014 season, and $7 million in 2015, according to the New York Post's Joel Sherman . The small-market Rays couldn't afford Balfour under normal circumstances.

Source: Grant Balfour on Yankees’ radar (12/2013): According to industry sources, the Yankees have shown some interest in closer Grant Balfour, whose two-year deal with the Orioles disintegrated. Balfour has converted 62 of 67 save opportunities the...

MLB free agent rumors: Mariners pursuing Grant Balfour, Brian Wilson (11/2013): Seattle is looking to sign a proven closer during the offseason. The Mariners used Danny Farquhar and Tom Wilhelmsen in the closer's role during 2013. Both pitcher had ERA's greater than 4.00 and combined to blow nine saves on the season.

Grant Balfour gives A's what they need (10/2013): Oakland Athletics can't be nice guys if they hope to advance past ALDS and Detroit Tigers

Oakland A's Grant Balfour gives up homerun in 10th, gets rare loss (06/2013): SEATTLE (AP) -- The Oakland Athletics aren't used to seeing anything go wrong when Grant Balfour's on the mound.

Keown: Grant Balfour's potty mouth that roars (05/2013): His peers claim he uses the foulest language in the game. He bleeping agrees.

Oakland A's closer Grant Balfour recovering ahead of schedule (02/2013): Balfour is recovering from minor knee surgery but he's getting better quicker than expected

A's Exercise Team Option, Retain Grant Balfour (10/2012): The Oakland Athletics have exercised their $4.5 million contract option for closer Grant Balfour, while the AL West champions have declined their half of a $10 million mutual option for shortstop Stephen Drew.