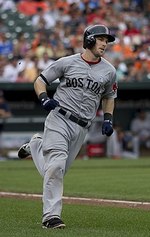 Current items with a signature of Stephen Drew

These are the most current items with a signature of Stephen Drew that were listed on eBay and on other online stores - click here for more items.

Traded items with a signature of Stephen Drew

If you're interested in Stephen Drew Rookie cards you might want to take a look at our sister site that specializes in Baseball Rookie Cards only.

The most expensive item with a signature of Stephen Drew (Autographed Stephen Drew Baseball Bat) was sold in August 2014 for $200.00 while the cheapest item (STEPHEN DREW AUTO SIGNED CAMDEN RIVERSHARKS TEAM BALL!!) found a new owner for $0.01 in September 2009. The month with the most items sold (14) was September 2008 with an average selling price of $17.23 for an autographed item of Stephen Drew. Sold items reached their highest average selling price in January 2017 with $99.95 and the month that saw the lowest prices with $0.99 was June 2019. In average, an autographed item from Stephen Drew is worth $9.99.

Most recently, these items with a signature of Stephen Drew were sold on eBay - click here for more items.

How is Yankees' Stephen Drew changing his hitting approach? (03/20/15): The Yankees signed Drew this offseason to be their starting second baseman

Stephen Drew’s awful 2014: Legit excuse or continued decline? (03/10/15): SARASOTA, Fla. — Yankees manager Joe Girardi said Stephen Drew was the Yankees’ starting second baseman on Tuesday. And Drew made it clear that was his expectation when he was...

Stephen Drew ends hitless drought after 29 at-bats (06/2014): Stephen Drew hadn't felt the joy of a base hit since June 17. He was able to end the drought with a ground-rule double against the Yankees on Friday night.

Stephen Drew set to rejoin Red Sox Monday (05/2014): BOSTON - Now that the Red Sox have finally fixed what was wrong with the left side of their infield, Stephen Drew is about to return.

Red Sox haven’t talked to Stephen Drew at all this season (04/2014): Just in case anyone thought the Red Sox might have considered making a run at re-signing shortstop Stephen Drew now that he remains a free agent one month into the season, Rob Bradford of WEEI.com says it's not happening.

Stephen Drew free agency: Mets unlikely to sign shortstop (01/2014): One by one, Drew seems to be losing potential suitors. One wonders if teams are just waiting for his price to drop as low as possible. The Mets' have been one of the popular guesses for those trying to project where Drew might end up this offseason.

Stephen Drew could land in either NY dugout (12/2013): There is still the possibility free-agent shortstop Stephen Drew could wind up in New York with either the Mets, where he would be a strong fit, or the Yankees. Thus...

Stephen Drew Is Just Like His Brother, Right Down to the Ring (10/2013): The Red Sox shortstop claims he does not follow in his brother J.D.'s footsteps, except that he wears a No.7 jersey and now has a Red Sox ring like him.

Farrell considers a change for Stephen Drew (09/2013): Red Sox manager John Farrell has been unshakably loyal to Stephen Drew this season, and with good results. Drew had a two-run homer in Thursday’s 3-1 victory against Baltimore.

The Case For Stephen Drew (08/2013): Agree or disagree, John Farrell is making the safe call in sticking with Stephen Drew over Xander Bogaerts.

Coming to the defense of Stephen Drew (04/2013): Based on email, Twitter and an occasional listen to sports talk radio, Stephen Drew is the subject of consternation among many Red Sox fans. That should not be the case.

Red Sox shortstop Stephen Drew wants to be his own man in Boston (12/2012): Stephen Drew believes his defense improved after his long rehab from an ankle injury.

Red Sox, Tigers And Yankees Among Teams Looking At SS Stephen Drew (11/2012): The Tigers, Red Sox and Yankees are among teams to have interest in free-agent shortstop Stephen Drew.

Brentwood Gazette published Educating Essex head Stephen Drew takes helm at Bren (09/2012): STEPHEN Drew is not the type of head teacher who hides himself away in his office.

Tigers trade chatter: D-Backs' Stephen Drew drawing interest (07/2012): The Tigers are said to be looking at pitching or second-base help. Could they be looking at shortstop, too?

Arizona Diamondbacks' Stephen Drew takes a major step in rehabilitation (05/2012): Notes: It wasn't in live game conditions -- it was simulated -- but it was a huge step in Drew's ongoing rehab and ultimate return to the Diamondbacks.

Many Arizona Diamondbacks can empathize with rehabbing Stephen Drew (04/2012): D-Backs Extra: Time will tell how long Diamondbacks shortstop Stephen Drew will need before his injured ankle returns to normal. That is, if it ever truly does.

Diamondbacks' Stephen Drew optimistic about possible Opening Day return (02/2012): A little more than a week before he plans to report to Salt River Fields for spring training, Diamondbacks shortstop Stephen Drew (ankle) doesn't wonder if he'll play. He wonders when.

GM Kevin Towers: Arizona Diamondbacks have backup plan for Stephen Drew (11/2011): With still no timetable set for shortstop Stephen Drew's recovery from ankle and sports-hernia surgeries, the Diamondbacks believe they are covered in the event he isn't ready for Opening Day.