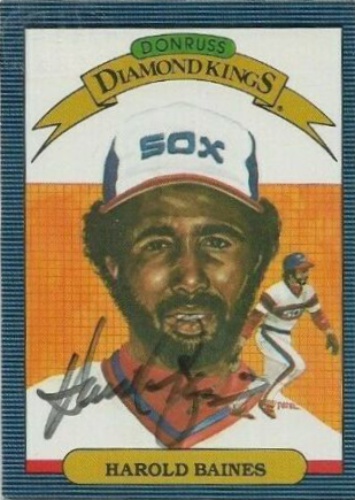 Harold Douglas Baines (born March 15, 1959) is an American former right fielder and designated hitter (DH) in Major League Baseball who played for five American League (AL) teams from 1980 to 2001, and is best known for his three stints with the Chicago White Sox. A Maryland native, he also played seven years with his hometown team, the Baltimore Orioles, over three separate periods. The first overall selection in the 1977 Major League Baseball Draft and a six-time All-Star, Baines led the AL in slugging percentage in 1984. He held the White Sox team record for career home runs from 1987 until Carlton Fisk passed him in 1990; his eventual total of 221 remains the club record for left-handed hitters, as do his 981 runs batted in (RBI) and 585 extra base hits with the team. His 1,688 hits and 1,643 games as a DH stood as major league records until David Ortiz broke them in 2013 and 2014. He also held the mark for career home runs as a DH (236) until Edgar Martínez passed him in 2004. More about Harold Baines

Current items with a signature of Harold Baines

These are the most current items with a signature of Harold Baines that were listed on eBay and on other online stores - click here for more items.

Traded items with a signature of Harold Baines

If you're interested in Harold Baines Rookie cards you might want to take a look at our sister site that specializes in Baseball Rookie Cards only.

The most expensive item with a signature of Harold Baines (1982-83 Harold Baines autographed Chicago White Sox professional mode... Lot 307) was sold in September 2016 for $1300.00 while the cheapest item (1997 HAROLD BAINES LEAF SIGNATURE SERIES AUTO) found a new owner for $0.01 in September 2010. The month with the most items sold (51) was December 2018 with an average selling price of $20.00 for an autographed item of Harold Baines. Sold items reached their highest average selling price in October 2013 with $94.99 and the month that saw the lowest prices with $0.99 was August 2010. In average, an autographed item from Harold Baines is worth $15.99.

Most recently, these items with a signature of Harold Baines were sold on eBay - click here for more items.

Baseball's quietest man will be the reason for many Hall of Fame speeches (12/07/19): Last winter's surprise selection of Harold Baines could blow the doors to Cooperstown wide open Sunday night -- and beyond.

Lennon: Baines' election changes how I vote for HOF (12/15/18): The fine line between the truly great players and the very good ones has become blurred in the age of statistical analysis.

Jeff Jacobs: As Harold Baines heads to Cooperstown, we worry about the Hall of F (12/14/18): When Harold Baines was elected to the Baseball Hall of Fame last weekend by the Today's Game Era committee, it had the smoke-filled-room scent of an inside job. And when Tony La Russa - who managed Baines in the minors and majors and is one of the 12 who voted for Baines - went afte

The Hall of Fame is lesser for Harold Baines' inclusion and Dick Allen’s absence (12/13/18): Baines was a good but not great player, and his induction shows the backroom dealing that Allen will have to overcome.

Lennon: Baines' election changes how I vote for HOF (12/2018): The fine line between the truly great players and the very good ones has become blurred in the age of statistical analysis.