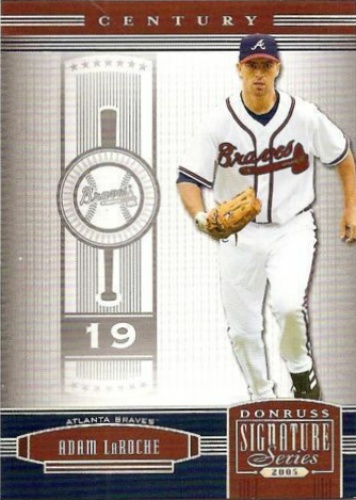 Current items with a signature of Adam LaRoche

These are the most current items with a signature of Adam LaRoche that were listed on eBay and on other online stores - click here for more items.

Traded items with a signature of Adam LaRoche

If you're interested in Adam LaRoche Rookie cards you might want to take a look at our sister site that specializes in Baseball Rookie Cards only.

The most expensive item with a signature of Adam LaRoche (Adam Laroche Signed Autographed Nationals Home Jersey Size XL Proof Jsa Coa) was sold in November 2014 for $200.00 while the cheapest item (2003 Donruss Studio Adam LAROCHE RC Signed AUTO Braves) found a new owner for $0.01 in April 2010. The month with the most items sold (11) was July 2009 with an average selling price of $9.99 for an autographed item of Adam LaRoche. Sold items reached their highest average selling price in October 2019 with $159.20 and the month that saw the lowest prices with $0.50 was September 2010. In average, an autographed item from Adam LaRoche is worth $5.99.

Most recently, these items with a signature of Adam LaRoche were sold on eBay - click here for more items.

Country star Luke Bryan calls White Sox's Adam LaRoche 'inspiring' (03/23/15): GLENDALE, Ariz. – Country music star Luke Bryan has had an opportunity to meet his share of celebrities during his career, but even he was a little giddy about the man he met in the White Sox locker room Monday morning at Camelback Ranch.

Spring training not ideal place for Adam LaRoche to learn DH routine (03/22/15): GLENDALE, Ariz. — Adam LaRoche hasn't found the spring at Camelback Ranch to be a particularly good training ground to figure out how to be a successful designated hitter.

For Adam LaRoche, DH training will come during White Sox season (03/22/15): GLENDALE, Ariz. – Adam LaRoche hasn’t found the spring at Camelback Ranch to be a particularly good training ground to figure out how to be a successful designated hitter.

Adam LaRoche had fond memories of time in White Sox clubhouse long ago (11/2014): The lesson in the White Sox's signing of Adam LaRoche is simple:

Nats Journal: Adam LaRoche back in Nationals lineup, not concerned about back st (08/2014): Adam LaRoche has dealt with back stiffness for years and knows his recent bout isn't serious.

Nats Journal: Adam LaRoche was next to pitch in the Nationals’ 16-inning win (06/2014): The first baseman hasn't pitched in a professional baseball game since 2003 and has been dying to do it again.

DC Sports Bog: Adam LaRoche joins Twitter (03/2014): It's as good a time as any to revisit other Nationals players' #FirstTweets.

DC Sports Bog: Nats’ Adam LaRoche with some ducks (01/2014): LaRoche poses with the spoils of another hunt.

Adam LaRoche out again; Chad Tracy back at first (07/2013): The Nationals think Tracy's track record as a pinch hitter outweighs his current struggles.

Adam LaRoche And His Son Would Like To Show You Their Very Large Guns (06/2013): No big deal, just the Washington Nationals first baseman and his son enjoying a summer day with their guns. Someone should introduce these two to Brek Shea . I bet they could team up for a kick-ass Fourth of July party. [ Records and Radio | Instagram ]

Adam LaRoche continues his surge (05/2013): After a viciously slow start to the season, the first baseman is helping carrying the team's offense.

Adam LaRoche snaps long hit drought (04/2013): The first baseman snaps an 0 for 26 hitless drought with a single, and after watching film with close friend Chipper Jones.

Countdown to spring training: No. 8, Adam LaRoche (02/2013): As the Washington Nationals prepare to report to Viera for spring training, we count down 10 players to watch this spring:

Adam LaRoche, Nationals still talking contract (10/2012): First baseman Adam LaRoches representatives from the SFX agency and the Nationals have continued to discuss a new contract for next season and beyond, with no deal imminent but the sides working toward an agreement. Read full article >>

Adam LaRoche helps Nationals claim first place in NL East midway through season (07/2012): The saying repeated often about the Washington Senators during the 1940s and 1950s was “First in war, first in peace and last in the American League.”

Adam LaRoche feeling good, but doesn’t expect to be at full strength by opening (02/2012): Almost each day brings another small milestone for Adam LaRoche . Every workout means more progress for his right shoulder, another step between the surgery that repaired a torn labrum last May and a fresh start in Washington. Read full article >>