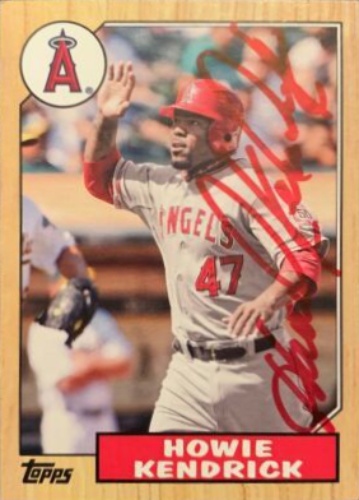 Howard Joseph Kendrick III (born July 12, 1983) is an American former professional baseball infielder and current special assistant to the General Manager for the Philadelphia Phillies. The Los Angeles Angels of Anaheim selected Kendrick in the tenth round of the 2002 Major League Baseball draft. He made his Major League Baseball (MLB) debut in 2006. He has played in MLB for the Angels from 2006 to 2014, Los Angeles Dodgers from 2015 to 2016, the Phillies in 2017 and the Washington Nationals from 2017 to 2020, winning a World Series Championship with them in 2019. In 2011, he appeared in the MLB All-Star Game. While primarily a second baseman throughout his career, he has also played first base and left field. More about Howie Kendrick

Current items with a signature of Howie Kendrick

These are the most current items with a signature of Howie Kendrick that were listed on eBay and on other online stores - click here for more items.

Traded items with a signature of Howie Kendrick

If you're interested in Howie Kendrick Rookie cards you might want to take a look at our sister site that specializes in Baseball Rookie Cards only.

The most expensive item with a signature of Howie Kendrick (HOWIE KENDRICK game used autographed Rawlings fielders glove 2011 PSA/DNA LOA) was sold in January 2020 for $695.00 while the cheapest item (2005 Cal Lg SIGNED Set, ADAM JONES & Howie Kendrick AUTO/AUTOGRAPH - RARE & MINT) found a new owner for $0.01 in September 2019. The month with the most items sold (17) was October 2019 with an average selling price of $24.00 for an autographed item of Howie Kendrick. Sold items reached their highest average selling price in May 2020 with $159.00 and the month that saw the lowest prices with $0.99 was August 2010. In average, an autographed item from Howie Kendrick is worth $17.97.

Most recently, these items with a signature of Howie Kendrick were sold on eBay - click here for more items.

Howie Kendrick, 2019 World Series hero for Nationals, retires after 15 MLB seaso (12/22/20): Kendrick, 37, made the announcement on social media on Monday

Kendrick, Nats' hero in 2019 playoffs, retires (12/22/20): Howie Kendrick announced via Instagram on Monday that he was retiring after 15 major league seasons.

Nats put Kendrick on IL with hamstring strain (09/09/20): The Nationals put 1B Howie Kendrick on the 10-day injured list, retroactive to Sunday, with a strained left hamstring.

Nats' Soto, Kendrick in camp after 2-week delay (07/17/20): Juan Soto and Howie Kendrick, who missed nearly two weeks of workouts for unspecified reasons, finally joined the Nats on Thursday for an intrasquad scrimmage.

Howie Kendrick's Game 7 homer shouldn't be overlooked; neither should his potent (04/01/20): Kendrick could be a vital piece for the defending World Series champs

Nationals bring back World Series hero Howie Kendrick on one-year deal, per repo (12/2019): The veteran hitter was highly productive in 2019

What are the chances of Howie Kendrick returning to Nationals? (11/2019): A reluctant market and particular skill gives Kendrick a chance to return to Washington.

BB Hall of Fame gets nice array of World Series artifacts (10/2019): COOPERSTOWN, N.Y. (AP) -- Artifacts from the World Series are headed to the Baseball Hall of Fame, including the ball hit by Washington's Howie Kendrick off the right-field foul pole for the go-ahead home run in Game 7.

Wire Taps: Michael A. Taylor simplifies swing; Kurt Suzuki and Yan Gomes ready f (02/2019): Catch up on the last 24 hours in Nationals news before we get to the first Grapefruit League game of the year tomorrow night...

New Dodgers second baseman Howie Kendrick quickly finds comfort zone (03/2015): If Howie Kendrick wondered how he would fit in with a new team after nine seasons with the Angels, those questions have been answered less than a month into his first spring with the Dodgers.

Dodgers Welcome 2B Howie Kendrick (12/2014): As a baseball fan, Howie Kendrick is impressed and intrigued by the Los Angeles Dodgers' offseason overhaul.

Angels GM doesn't seem eager to trade 2nd baseman Howie Kendrick (11/2014): Howie Kendrick is drawing the most trade interest among Angels players this winter, which is hardly a surprise.

Howie Kendrick's postseason track record hasn't been a hit (10/2014): Five years would seem long enough for Howie Kendrick to distance himself from a postseason resume that is nowhere near as glowing as his nine-year body of work for the Angels.

Howie Kendrick's hit sparks rally as Angels defeat Phillies, 4-3 (08/2014): There are plenty of baseball slang terms for the hit that pushed the Angels toward a 4-3 victory over the Philadelphia Phillies on Wednesday night at Angel Stadium, none of them very manly or flattering — dying quail, jam shot, blooper, lawn dart, duck snort.

Birthday Boy Howie Kendrick Leads Angels Past Rangers, 5-2 (07/2014): Howie Kendrick celebrated his 31st birthday with three hits, including an RBI single during a four-run sixth inning as the Los Angeles Angels sent the Texas Rangers to their seventh straight loss, 5-2 on Saturday night.

Howie Kendrick is fitting in as Angels' latest leadoff batter (04/2014): The second baseman has done well in his first two games at the top of the batting order. The leadoff spot in the Angels' batting order has been a case of musical chairs this season.

ESPN: Detroit Tigers a 'possible' trade fit with Angels, Howie Kendrick (11/2013): Kendrick is a career .292 hitter and has had double-digit home runs in four of his past five seasons, including a career-high 18 in 2011 when he was an All-Star.

Angels rumors: Erick Aybar trade unlikely, Howie Kendrick still in play (07/2013): Both Aybar and Kendrick, who are signed to team-friendly contracts through the next few seasons, were rumored to be available Tuesday afternoon.

Angels' Howie Kendrick doesn't want to mess with a good thing (06/2013): Howie Kendrick began Saturday batting .325, fifth in AL, in part because he's been going to the opposite field. But Angels would like him to use the whole field.