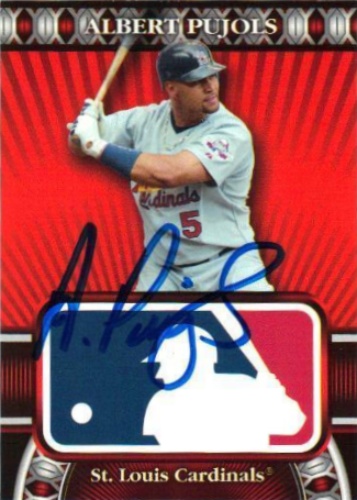 José Alberto Pujols Alcántara (born January 16, 1980) is a Dominican-American professional baseball first baseman and designated hitter for the St. Louis Cardinals of Major League Baseball (MLB). Nicknamed "The Machine" or "La Máquina" in Spanish, he played his first 11 seasons in MLB for the Cardinals, then played with the Los Angeles Angels for more than nine seasons before joining the Los Angeles Dodgers for half a season. With St. Louis, Pujols was a three-time National League (NL) Most Valuable Player (MVP) (2005, 2008, 2009) and nine-time All-Star (2001, 2003–2010). After joining the Angels in 2012, he made one All-Star appearance, in 2015. After returning to the St. Louis Cardinals in 2022, he was chosen for the All-Star game as a legacy selection by MLB Commissioner Rob Manfred in honor of his career achievements. He is considered one of the greatest players of all time. More about Albert Pujols

Current items with a signature of Albert Pujols

These are the most current items with a signature of Albert Pujols that were listed on eBay and on other online stores - click here for more items.

Traded items with a signature of Albert Pujols

If you're interested in Albert Pujols Rookie cards you might want to take a look at our sister site that specializes in Baseball Rookie Cards only.

The most expensive item with a signature of Albert Pujols (2001 Bowman Chrome ALBERT PUJOLS Rookie Refractor Autograph BGS 9 Auto 9) was sold in September 2022 for $25000.00 while the cheapest item (,?2009 Upper Deck Signature Stars Albert Pujols St. Louis Cardinals #8?) found a new owner for $0.01 in December 2022. The month with the most items sold (126) was September 2022 with an average selling price of $374.99 for an autographed item of Albert Pujols. Sold items reached their highest average selling price in June 2018 with $599.99 and the month that saw the lowest prices with $4.99 was January 2019. In average, an autographed item from Albert Pujols is worth $124.99.

Most recently, these items with a signature of Albert Pujols were sold on eBay - click here for more items.

Three things on Cardinals' offseason to-do list after bidding farewell to Albert (10/10/22): The Cardinals have the pieces in place for another successful (regular) season in 2023

St. Louis Cardinals Eliminated by Philadelphia Phillies in Wild-Card Round (10/09/22): With the Phillies topping the Cardinals in the wild-card round, Albert Pujols and Yadier Molina have likely played their final game. Cooperstown is waiting.

Albert Pujols, Yadier Molina both end legendary careers with hits, but Cardinals (10/09/22): The two future Hall of Famers called it a career on Saturday night

Albert Pujols almost retired midseason before highlight second half (10/07/22): Pujols played himself back into an everyday role after the All-Star break

Pujols says he almost quit after struggles in June (10/07/22): Before making history with his 700th career home run, Albert Pujols said he considered calling it quits in June after a rough start to the year.

2022 MLB bold postseason predictions, from Albert Pujols to Aaron Judge (10/2022): Will Pujols have the October of his life? Will the National League continue its dominance?

Fan who caught Albert Pujols' 700th Home Run ball intends to keep it, per report (09/2022): Pujols says he's not concerned about getting ball from his 700th home run

Albert Pujols in pursuit of 700 home runs: Everything to know as Cardinals legen (08/2022): Pujols has been red hot in August and could jump A-Rod on the all-time HR list soon

Pujols honored to win Ali award for off-field work (07/2022): Albert Pujols won the Muhammad Ali Sports Humanitarian Award as part of the 2022 ESPYS, the result of his foundation's work in the Dominican Republic and with those who have Down syndrome.

WATCH: Albert Pujols homers for first time since return to Cardinals as Busch St (04/2022): He did so at the expense of the Royals on Tuesday night

Batting Around: What other late-career MLB reunion do you want to see? (03/2022): Albert Pujols is back in St. Louis; Zack Greinke is in Kansas City again; so who should be next?

Pujols thrilled to play in D.R., not ready to retire (10/2021): Albert Pujols, who is getting ready to play winter ball in the Dominican Republic for the first time in his career, said he isn't quite ready to retire from Major League Baseball just yet.

WATCH: Albert Pujols homers against Angels, his former club, as Dodgers win Free (08/2021): Pujols hit 222 home runs in his 10 years with the Angels

MLB trends: How substance crackdown has impacted spin rates; Albert Pujols makin (06/2021): What have we learned from MLB's first 10 days of sticky-stuff enforcement?

WATCH: Giants outfielder Mike Tauchman robs Albert Pujols of walk-off homer in w (05/2021): 'You practice it as a little kid over your chain-link fence in the backyard,' Tauchman said afterward

Albert Pujols moves ahead of Alex Rodriguez for second place on MLB's all-time R (08/2020): Pujols drove in his 2,087th run Monday and only Hank Aaron is ahead of him now

MLB's all-drafted after the fifth round team: Albert Pujols, Mike Piazza, Nolan (05/2020): The 2020 MLB Draft will span just five rounds; here's an idea of the talent that could slip through

'That's the guy!' The arrival of Albert Pujols (04/2020): In 2001, nobody expected Albert Pujols to become Albert Pujols. But it didn't take long to realize something special was happening in St. Louis.

How much money could be spent in Vegas on free agents? (12/2018): In trying to figure out what kind of megadeals could be struck at the winter meetings, we look back at the history of big-money free-agent contracts.

Angels' Albert Pujols is swinging better this spring (03/2015): The difference in Albert Pujols is evident to Angels hitting coach Don Baylor, who has watched the slugger rifle line drives all over the field for more than a month now.

Albert Pujols says he’d rather watch his daughter in the Olympics than play in 2 (02/2015): Seems like a legit reason.

Smith: O.C. kids help Angels' Albert Pujols stay grounded (11/2014): ORANGE - One of the best baseball players of all time walked around the Orange High field in a ball cap, T-shirt and sweats as he introduced himself to a knees-shaking, 7-year-old boy who's just learning the game.

Albert Pujols plays the “you never played the game!” card (08/2014): Whatever motivates you, Albert.

Albert Pujols Drives In Only Run To Lift Angels Past Orioles (07/2014): Albert Pujols hit an RBI single in the 13th inning, and the Los Angeles Angels beat the Baltimore Orioles 1-0 Thursday night to avert a three-game series sweep.

Albert Pujols has a swollen lymph node in his groin (06/2014): The aches keep on coming for El Hombre

Albert Pujols gets day off on eve of Angels' series against Athletics (05/2014): Thursday night's game between the Angels and Seattle Mariners was played with almost a half-billion dollars' worth of player contracts on the bench.

Albert Pujols extends charity services to Nashville (01/2014): Albert Pujols, currently of the Los Angeles Angels of Anaheim, visited the University Club of Nashville to announce that his charity, the Pujols Family Foundation, will be extending its services to th

Cusumano: You can thank Albert Pujols for Michael Wacha (09/2013): Also, Frank takes a good look at Michael Wacha's near-no-hitter, and offers his opinion on why, if the game was played in 1982, Wacha would have gotten his no hitter.

Albert Pujols and Torii Hunter Alleged to Have Turned Angels Clubhouse into a Fi (08/2013): There is a report that during the 2012 season, Angels Torii Hunter, now on the Detroit Tigers, and Albert Pujols, now on the DL, got into a fight. And the fight apparently happened after Pujols...

Is Albert Pujols officially a bust? (07/2013): The aging slugger has eight years and $200 million left on his contract

ANGELS 3, DETROIT 1: Albert Pujols, Jered Weaver provide a big lift as Halos swe (06/2013): Albert Pujols got the biggest hit of the game. Jered Weaver delivered the most encouraging performance, as far as the Angels were concerned.

Albert Pujols, the Angels' 10-year, $240 Million Man, None and Done? (05/2013): When Albert Pujols signed with the Anaheim Angels of Anaheim in December 2011, some baseball experts wondered what kind of production the 33-year-old would give in the later years of his 10-year,...

Albert Pujols won't let sore foot slow him down (03/2013): The Angels first baseman is wearing custom orthotics and has to spend a little extra time in the training room, but those are the only concessions he has made for the plantar fasciitis in his left foot.

Baseball notes: Albert Pujols eases in (02/2013): Pujols had off-season surgery to clean up his knee and will not go 100 percent this early.

Albert Pujols : Won't Play in Classic (01/2013): Update: Pujols will not play for the Dominican Republic in this year's World Baseball Classic, Mike DiGiovanna of the Los Angeles Times reports.

Albert Pujols’ contract not a smart move for Angels, says Tony La Russa (09/2012): “I think Albert is perfect — I call him Albert P. Pujols for Albert Perfect Pujols — but I don’t think that I would ever endorse a contract beyond six years, tops.”

Miguel Cabrera and Albert Pujols sit with injuries (08/2012): The Detroit Tigers and Los Angeles Angels each sat a star in the hopes of keeping them healthy for rest of the season.

How much do the Cards miss Albert Pujols? (06/2012): News 4's Steve Savard and 101ESPN's Bob Ramsey discuss how much the Cardinals miss having Albert Pujols.

Albert Pujols a $240 million mistake so far (04/2012): On the first day of spring training, Albert Pujols stood before microphones in Arizona to formally introduce a new era for the Los Angeles Angels.

Editorial: Going to bat for Albert Pujols' humility, a superstar who has all bas (02/2012): If they had planned it, the Angels couldn't have created a nicer way for Southern California's newest sports star to make a good first impression with the region's fans.

Tribe fans wanted Albert Pujols? If it only were that simple: Hey, Hoynsie! (12/2011): The new year can't prevent some 2011 topics from filling up Paul Hoynes' mailbag.

Albert Pujols Helps Cardinals Past Mets, 6-2 (07/2011): Albert Pujols hit a two-run homer in the first and Jake Westbrook had the Mets pounding the ball into the ground over eight excellent innings as the St. Louis Cardinals beat New York 6-2 Thursday to avoid a three-game sweep.

Albert Pujols and the Plight of Latino Baseball Players (06/2011): The Cardinals first baseman is the best slugger since Lou Gehrig. Why isn't he a household name yet?