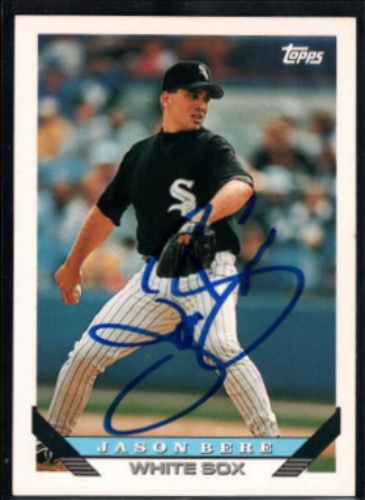 Jason Phillip Bere (born May 26, 1971) is an American former professional baseball pitcher and bullpen coach. He played in Major League Baseball for parts of 11 seasons from 1993 to 2003, for the Chicago White Sox, Cincinnati Reds, Milwaukee Brewers, Chicago Cubs, and Cleveland Indians. He was elected to the 1994 MLB All-Star Game, but injuries limited his playing career. Bere was the Indians' bullpen coach from 2015 to 2017. More about Jason Bere

Current items with a signature of Jason Bere

These are the most current items with a signature of Jason Bere that were listed on eBay and on other online stores - click here for more items.

Traded items with a signature of Jason Bere

The most expensive item with a signature of Jason Bere (Chicago White Sox Jason Bere signed auto OAL baseball World Series Cubs Indians) was sold in November 2017 for $25.00 while the cheapest item (JASON BERE, 1992 BOWMAN RC BASEBALL AUTOGRAPHED CARD # 358, WHITE SOX, PITCHER) found a new owner for $0.10 in July 2014. The month with the most items sold (6) was December 2011 with an average selling price of $0.99 for an autographed item of Jason Bere. Sold items reached their highest average selling price in November 2017 with $25.00 and the month that saw the lowest prices with $0.10 was July 2014. In average, an autographed item from Jason Bere is worth $1.12.

Most recently, these items with a signature of Jason Bere were sold on eBay - click here for more items.

For Jason Bere, no regrets over career that could have been (02/25/14): When Derek Jeter recently announced that 2014 would be his final season, Baseball America nostalgically posted its Top 100 Prospects list from spring training 1993, the list on which Jeter's name first appeared.