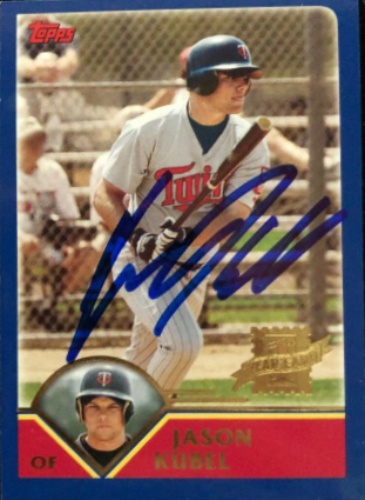 Current items with a signature of Jason Kubel

These are the most current items with a signature of Jason Kubel that were listed on eBay and on other online stores - click here for more items.

Traded items with a signature of Jason Kubel

If you're interested in Jason Kubel Rookie cards you might want to take a look at our sister site that specializes in Baseball Rookie Cards only.

The most expensive item with a signature of Jason Kubel (Minnesota Twins Jason Kubel Signed MLB Jersey) was sold in October 2009 for $190.00 while the cheapest item (JASON KUBEL SIGNED 8X10 PHOTO MINNESOTA TWINS AUTO MLB) found a new owner for $0.01 in December 2009. The month with the most items sold (14) was October 2009 with an average selling price of $3.63 for an autographed item of Jason Kubel. Sold items reached their highest average selling price in December 2011 with $90.00 and the month that saw the lowest prices with $0.99 was January 2008. In average, an autographed item from Jason Kubel is worth $5.50.

Most recently, these items with a signature of Jason Kubel were sold on eBay - click here for more items.

Twins release veteran OF Jason Kubel (06/16/14): Kubel, 32, hit .224 with one home run, 13 RBI and a .295 slugging percentage in 176 plate appearances with the Twins this season. He went unclaimed when the team placed him on waivers last week, and now he is free to sign with any major league team.

Twins Release Jason Kubel (06/16/14): TODAY: Kubel has officially been released by the Twins, reports MLB.com’s Rhett Bollinger (via Twitter). YESTERDAY, 12:59pm: The Twins haven’t yet released Kubel and have until the end of the official business day Tuesday to decide on him, Mike Berardino … Continue reading →

Twins release veteran OF Jason Kubel (06/2014): Kubel, 32, hit .224 with one home run, 13 RBI and a .295 slugging percentage in 176 plate appearances with the Twins this season. He went unclaimed when the team placed him on waivers last week, and now he is free to sign with any major league team.

Twins: Slumping Jason Kubel tries to fight back against the shift (05/2014): NEW YORK -- Jason Kubel turned 32 on Sunday, but there wasn't much to celebrate.

TwinsCentric: Jason Kubel off to a fast start (04/2014): Jason Kubel has hammered pitching. Is he healthy again?

Jason Kubel: 'Feels like I haven't left' (02/2014): Twins outfielder Jason Kubel talks about rejoining the Twins after leaving in 2011 for a two-year contract with the Arizona Diamondbacks.

Minnesota Twins: Jason Kubel could earn up to $3 million (12/2013): Veteran outfielder Jason Kubel, recently signed to a minor league deal, will receive a $2 million base salary if he makes the Twins' big-league roster.

Cleveland Indians add Jason Kubel in trade to bring versatility to bench (08/2013): DETROIT: At one time, Jason Kubel was a prized prospect in the Minnesota Twins’ farm system.

Justin Upton traded, Jason Kubel staying put, Orioles go on (01/2013): Yes, now we can assume Jason Kubel is off the trade block and off the Orioles’ radar.

Potential Targets: Jason Kubel (12/2012): The Texas Rangers are still likely searching for at least one more middle-of-the-order type hitter. The options are dwindling, but here's one. Photo Credit: Getty Images

Ex-Twin Jason Kubel mashes some baseballs in Arizona (07/2012): The former Twins outfielder hit four home runs over the weekend and leads the National League in RBI.

Arizona Diamondbacks' Jason Kubel motivated to make big impact (03/2012): The Diamondbacks' new left fielder is the quiet type, a sort of silent strongman they are counting on to provide thump in the middle of the order.

Sore left foot could lead Twins to end Jason Kubel's season early (09/2011): Jason Kubel isn't officially shut down, as teammates Joe Mauer and Tsuyoshi Nishioka are, but if he plays again this season, it will be in a limited capacity.

The bright spot: Jason Kubel's hot bat has been a ray of sunshine in a gloomy sp (05/2011): Rick Porcello was Detroit's starter Tuesday in a 10-2 victory over the Twins and saw Jason Kubel for the first time since last season. Wednesday, he was asked if Kubel - one of baseball's hottest hitters this season - looked any different.