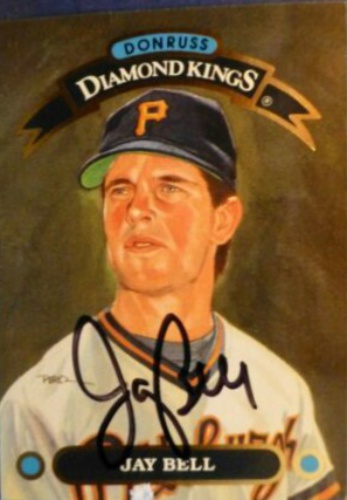 Jay Stuart Bell (born December 11, 1965) is an American former Major League Baseball shortstop and former manager of the Rocket City Trash Pandas of the Southern League. He played for the Cleveland Indians (1986–88), Pittsburgh Pirates (1989–96), Kansas City Royals (1997), Arizona Diamondbacks (1998–2002) and New York Mets (2003). He was the bench coach for the Cincinnati Reds, and was the bench coach for the New Zealand national baseball team that competed in the 2013 World Baseball Classic. More about Jay Bell

Current items with a signature of Jay Bell

These are the most current items with a signature of Jay Bell that were listed on eBay and on other online stores - click here for more items.

Traded items with a signature of Jay Bell

The most expensive item with a signature of Jay Bell (Jay Bell Auto Autographed Signed 1993 Upper Deck SP #182 Baseball Card - Pirates) was sold in May 2021 for $200.00 while the cheapest item (JAY BELL AUTOGRAPHED VINTAGE PHOTO PIRATES) found a new owner for $0.01 in May 2011. The month with the most items sold (10) was February 2016 with an average selling price of $2.80 for an autographed item of Jay Bell. Sold items reached their highest average selling price in February 2012 with $49.99 and the month that saw the lowest prices with $0.38 was March 2014. In average, an autographed item from Jay Bell is worth $2.99.

Most recently, these items with a signature of Jay Bell were sold on eBay - click here for more items.

Take our Jay Bell quiz (11/12/13): The former Pittsburgh hitting coach reportedly is joining new Reds manager Bryan Price's staff as bench coach. How much do you know about Bell?

Pirates’ Jay Bell: The Little Things Are “Extremely Important” (03/2013): Pirates pitching coach Jay Bell hopes to encourage the team as they get ready for another season and remind players that it's not always just about scoring a home run.

A Hitting Lesson With The Pirates’ Jay Bell (02/2013): The sun rises on another day at Pirate City in Bradenton, Fla., which means Jay Bell is already hard at work. With the new day's sunshine blaring into his eyes, it didn't take long to realize, this guy lives and breathes hitting.