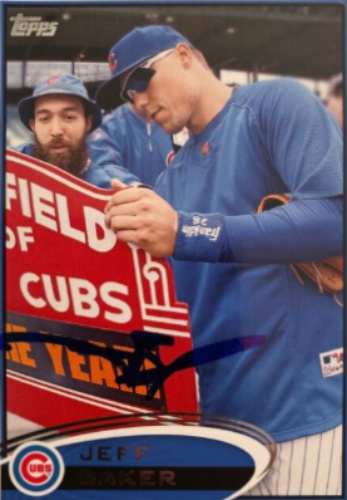 Current items with a signature of Jeff Baker

These are the most current items with a signature of Jeff Baker that were listed on eBay and on other online stores - click here for more items.

Traded items with a signature of Jeff Baker

The most expensive item with a signature of Jeff Baker (RARE SIGNED CHICAGO CUBS JEFF BAKER GAME USED BAT COA) was sold in September 2011 for $59.99 while the cheapest item (Jeff Baker Autographed Card auto) found a new owner for $0.25 in July 2010. The month with the most items sold (6) was July 2008 with an average selling price of $1.99 for an autographed item of Jeff Baker. Sold items reached their highest average selling price in September 2010 with $59.95 and the month that saw the lowest prices with $0.79 was July 2021. In average, an autographed item from Jeff Baker is worth $2.76.

Most recently, these items with a signature of Jeff Baker were sold on eBay - click here for more items.

Happy trails to you, Jeff Baker, until we meet again: Slidell Town Talk (01/20/15): Earlier this month, we said good-bye to a genuinely great guy.  He will be missed by so many people in Slidell and from away, me included. Jefferson William Baker, Sr., was a man of many talents and had a zest...

Jeff Baker's Single Gives Marlins Walk-Off Win Over Nats (07/28/14): Jeff Baker hit a two-out RBI single to cap a four-run rally in the ninth inning by the Miami Marlins, who extended their winning streak to five games by beating the Washington Nationals 7-6.

Watch: Jeff Baker hits walk-off double off Yasiel Puig's face as Marlins edge Do (05/04/14): Jeff Baker's walk-off made Yasiel Puig violently crash into the wall and put the Marlins above .500.

Jeff Baker: Predictions for beer trends in 2014 (01/2014): Maybe it’s cliché, but I thought it apropos to review some of the craft beer trends from last year and turn an eye to what might lay ahead in 2014. I’m calling it: the black IPA is on its last legs.

Nats Journal: Nationals show interest in Jeff Baker (12/2013): Still looking to beef up their bench, the Nationals have been in touch with free agent Jeff Baker.

Jeff Baker: counting down Wordstock's 12 must-see writers and panels (09/2013): Check back every day this week for more Wordstock tips and recommendations.

Jeff Baker: Jeffery Deaver found a formula for success as a thriller writer (06/2013): Deaver is the author of 10 novels featuring Lincoln Rhyme and Amelia Sachs, and recently wrote a novel in the James Bond series.

Jeff Baker: Elliott Smith biography due out in October (05/2013): Schultz teaches at Pacific University and is the author of books on Truman Capote and Diane Arbus.

Jeff Baker: inside a slaughterhorse; another great TV show; Friday events (04/2013): Conover's book "Whiteout" is an inside look at the high life in Aspen, Colo.