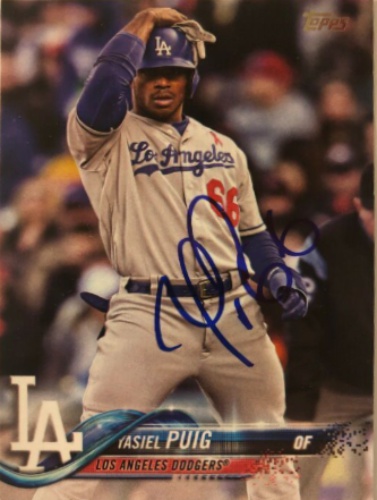 Yasiel Puig Valdés (/ˈjɑːsiɛl ˈpwiːɡ/ YAH-see-el PWEEG, Spanish: ; born December 7, 1990) is a Cuban-born American professional baseball right fielder for Kiwoom Heroes of the KBO League. He has played in Major League Baseball (MLB) for the Los Angeles Dodgers, Cincinnati Reds, and Cleveland Indians. His nickname is "The Wild Horse", given to him by former longtime Dodgers broadcaster Vin Scully. More about Yasiel Puig

Current items with a signature of Yasiel Puig

These are the most current items with a signature of Yasiel Puig that were listed on eBay and on other online stores - click here for more items.

Traded items with a signature of Yasiel Puig

If you're interested in Yasiel Puig Rookie cards you might want to take a look at our sister site that specializes in Baseball Rookie Cards only.

The most expensive item with a signature of Yasiel Puig (2012 Leaf Valiant Draft Prismatic BLACK Yasiel Puig Rookie RC Signed AUTO 1/5) was sold in June 2013 for $1325.00 while the cheapest item (Yasiel Puig #5 Sketch Card Limited Edition 4/5 Edward Vela Signed) found a new owner for $0.99 in January 2022. The month with the most items sold (43) was October 2017 with an average selling price of $69.99 for an autographed item of Yasiel Puig. Sold items reached their highest average selling price in March 2016 with $400.00 and the month that saw the lowest prices with $9.99 was June 2019. In average, an autographed item from Yasiel Puig is worth $64.99.

Most recently, these items with a signature of Yasiel Puig were sold on eBay - click here for more items.

Puig changing plea to not guilty of lying in probe (12/01/22): Former major league outfielder Yasiel Puig has decided to withdraw his agreement to plead guilty to a charge of lying to federal agents investigating an illegal gambling operation.

Agent says Puig felt 'rushed' at probe with feds (11/16/22): A statement from Yasiel Puig's agent says the former major leaguer did not have a criminal attorney with him and felt compromised partly because of his mental health issues at an interview with federal agents investigating an illegal gambling operation.

Ex-Dodgers star Yasiel Puig to plead guilty to lying to federal authorities in s (11/15/22): Puig last played in the U.S. major leagues in 2019

Yasiel Puig denies allegations in sexual assault lawsuit; accuser responds (04/2021): Puig has not played in an MLB game since 2019

Source: Puig still a free agent after positive test (07/2020): Yasiel Puig's deal with the Braves is off after the veteran outfielder announced Friday that he has tested positive for COVID-19.

Yasiel Puig headlines 15 free agents who could fill universal DH roles for NL te (05/2020): Some National League clubs might need to sign a slugger in free agency if the universal DH rule is implemented

Yasiel Puig confirms Marlins and others made him offers, but doesn't think there (04/2020): Puig divulged as much during a recent interview with El Nuevo Herald

2019 Cincinnati Reds questions: Which version of Yasiel Puig will show up this s (02/2019): Yasiel Puig should benefit from playing at a hitter-friendly park and it's probably a plus that he's in the last year of his contract.

Lineups: Yasiel Puig, Juan Uribe get day off for Dodgers (04/2015): PHOENIX -- Neither Yasiel Puig nor Juan Uribe is off to a good start. But Dodgers manager Don Mattingly said that's not necessarily the reason they aren't in the lineup tonight. "Just really working JT in and working Andre in," Mattingly said of...

The Road With Yasiel Puig (03/2015): The Los Angeles Dodgers outfielder talks about his journey to Major League Baseball.

Yasiel Puig has reported to spring training early (02/2015): God, he always wants the spotlight on him, doesn't he?

Yasiel Puig bought a house and it’s kind of boring and I’m sad (01/2015): This man should live someplace crazier than a McMansion in Sherman Oaks.

Héroes for sale: Teófilo Stevenson, Yasiel Puig and the plight of the Cuban athl (12/2014): Immigration restrictions may soon be over, but for decades Cuba's stars have faced an impossible choice: Stay or go

Dodgers' Yasiel Puig seeks dismissal of Cuban man's $12-million suit (10/2014): The attorney for Yasiel Puig asked a federal judge Thursday to dismiss a lawsuit that faults the Dodgers outfielder for the alleged imprisonment and torture of a Cuban man.

Yasiel Puig, Dodgers match club records for triples in routing Giants (07/2014): Yasiel Puig tied a franchise record with three triples and added a double and two RBIs as the Los Angeles Dodgers moved within a half-game of NL West-leading San Francisco by beating the Giants 8-1 on Friday night.

Dodgers phenom Yasiel Puig has biopic on deck from Brett Ratner (04/2014): The story of ballplayer Yasiel Puig's harrowing journey from Cuba to the United States seems tailor-made for the big screen, with its shady smugglers, speeding cigarette boats and one heck of a Hollywood ending.

Dodgers, Yasiel Puig have clear-the-air meeting (03/2014): L.A. is 2-0, which is as good a time as any for Don Mattingly and the team to straighten out some issues.

Arizona Radio Host Advocates Beaning Yasiel Puig (02/2014): The most irritating rivalry in baseball will continue into 2014, at least in the minds of some fans and at least one sociopathic radio guy. Read more...

Yasiel Puig Shows Up at Little League Practice, Asks If He Can Hang Out, Ends Up (10/2013): Maybe Little Johnny will remember to keep his eye on the ball if he is told so in Little League practice — by freaking Yasiel Puig. Puig is not playing in the World Series this week after his Dodgers got bounced by the Cardinals, but he’s not ready for baseball to end. So he headed […]

Dodgers: Yasiel Puig OK after fouling ball off foot, leaving game (09/2013): They can give you pause in a hurry these days, one sudden wrong turn or foul ball or pitch thrown a tad awkwardly.

Yasiel Puig throws home to nail Rene Rivera at the plate (08/2013): The Padres already scored one run against the Dodgers in the fourth inning on Saturday night. San Diego catcher Rene Rivera tried to make it two runs by scoring from second on a single to right field.

Yasiel Puig Leads Dodgers to Sixth Straight Win, Are They Turning a Corner? (06/2013): Dodgers are still under .500 but making a push toward contention.