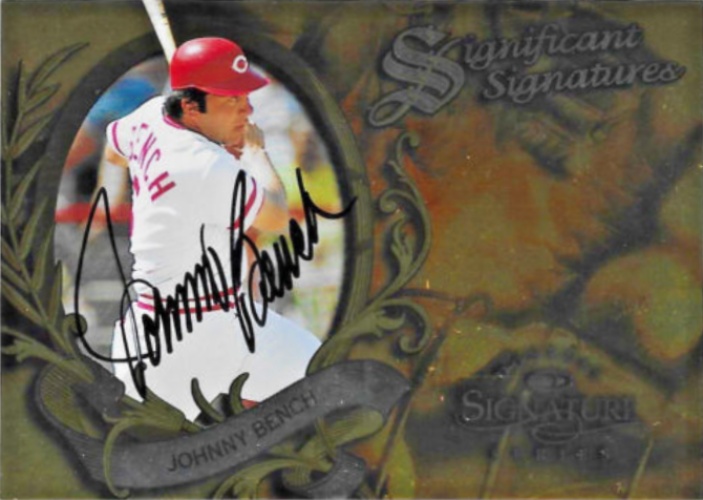 Johnny Lee Bench (born December 7, 1947) is an American former professional baseball player. He played his entire Major League Baseball career, which lasted from 1967 through 1983, with the Cincinnati Reds, primarily as a catcher. Bench was the leader of the Reds team known as the Big Red Machine that dominated the National League in the mid-1970s, winning six division titles, four National League pennants and two World Series championships. He is widely regarded as the greatest catcher of all time. More about Johnny Bench

Current items with a signature of Johnny Bench

These are the most current items with a signature of Johnny Bench that were listed on eBay and on other online stores - click here for more items.

Traded items with a signature of Johnny Bench

If you're interested in Johnny Bench Rookie cards you might want to take a look at our sister site that specializes in Baseball Rookie Cards only.

Most recently, these items with a signature of Johnny Bench were sold on eBay - click here for more items.

Auction winnings returning to Reds legend Bench (12/11/20): The winning bidder on over $1 million worth of memorabilia from a recent auction of Johnny Bench's personal collection is returning the items to the Hall of Fame catcher, with whom he has been friends since 1967.

Yadier Molina claims MLB doesn't want him to catch Johnny Bench in Gold Gloves, (10/22/20): The Gold Gloves this year were determined by numbers, so there's no conspiracy

Imagining every NL team's free-agent pitch to Bryce Harper (12/08/18): Bryce Harper is 26 years old, a superstar athlete, and a free agent who's about to become an unimaginably rich man. The entire baseball world sits at his feet.We took a shot on behalf of everybody in baseball and imagined what each team's pitch to Harper might look like. Today, we're letting the Nat

Annual luncheon to feature Johnny Bench (12/2018): Baseball Hall of Famer Johnny Bench will be the featured speaker at the 11th annual Law Foundation of Berks County and Pennsylvania Institute of Cert

LSU senior Kade Scivicque remains on watch list for the 2015 Johnny Bench Award (04/2015): The Maurepas native is the No. 2-ranked Tigers' leadng hitter and has been one of the SEC's top catchers as well.

Baseball. Breazeale Named to Johnny Bench Award Watch List (03/2015): The Wake Forest sophomore is up for the award which recognizes the top catcher in NCAA Division I.

Hall of Fame Catcher Johnny Bench Buys Home (12/2014): Johnny Bench, the man many consider to be the best baseball catcher of all time, has just caught the best real estate deal of all time — thrown in the pocket by former St. Louis Cardinals pitcher Matt Morris.

Baseball great Johnny Bench tours Bristol business (08/2014): There's a local company that's getting national attention, and they have a former baseball great who's helping to get the word out about the company and its product.

KSU's Pentecost wins Johnny Bench Award as nation's best catcher (06/2014): Max Pentecost hasn’t yet signed with the Toronto Blue Jays, who drafted him earlier this month, but he already has a major-league resume.

OH YEAH! '80s Johnny Bench Kool-Aid Blooper Reel Is A Treasure Trove (10/2013): In 1985, Reds catcher Johnny Bench made a series of ads for Kool-Aid that masqueraded as mini-lectures on how to play baseball. Since we're on the Kool-Aid beat today , we thought we'd bring you a few bloopers from the production of those spots. Read more...

Move over Johnny Bench, pranksters load Fargo ballpark with desks (09/2013): FARGO - You've heard of ballpark franks. Well, what about ballpark pranks? Fargo police had one on their hands Friday morning when they received a report of school desks scattered strategically around Jack Williams Stadium in north Fargo.

Video: Johnny Bench sings at Insperity Pro Am (04/2013): THE WOODLANDS – The Insperity Championships are this week at The Woodlands Country Club. The tournament starts on Friday but on Monday, some of the best golfers partnered up with some celebrities to raise money for a good cause.

MLB: Hall of Fame vote not surprising to local connections Johnny Bench, Carlos (01/2013): For the contingent of former major league ballplayers who now call Southwest Florida home, the decision by the Baseball Writers Association of America to not elect a single player to the Hall of Fame came as bit of a surprise, although it wasn't entirely unexpected.

Rose getting into the Hall of Fame is still a thorny issue for Johnny Bench (11/2012): I did not get to ask any questions of Johnny Bench on Wednesday during his appearance in the Lehigh Valley. He had to leave immediately after his presentation at the Holiday Inn Conference Center in Foglesville. By the time I got from my table to his, he was gone.

Johnny Bench to host signing session Thursday (09/2012): The Sports Gallery, a memorabilia shop off Cincinnati-Dayton Road in West Chester, is scheduled to host an autograph session with Major League Baseball Hall of Fame catcher Johnny Bench this Thursday from 6 to 8 p.m.

WNY Unknown: Johnny Bench (11/2011): BUFFALO, NY-- Did you know that the man considered one of baseball's greatest catchers of all time, got his start right here in the Queen City?

A.M. UPDATE: Johnny Bench to speak in Muskogee (05/2011): Muskogee Regional Medical Center will host a free seminar on joint pain from 4:30 p.m. to 5:30 p.m. Wednesday at the Muskogee Civic Center, intersection of Fifth and Boston streets.